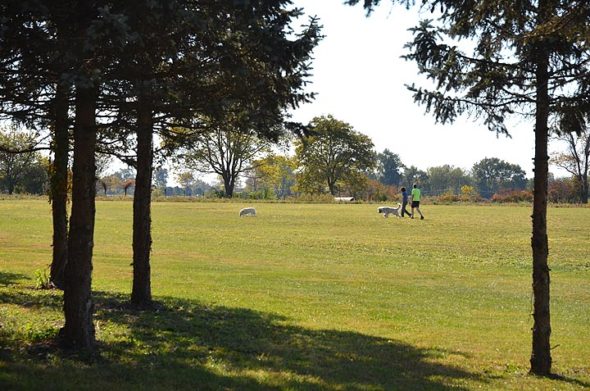 People and dogs strolled the grounds of Twin Towers Park on a recent sunny Sunday. A parks levy is up for renewal, providing funding for the county’s 3,000-plus acres of parks and preserves, as well as 62 miles of bike trails. (Photo by Audrey Hackett)

Twin Towers Park was tranquil on a recent sunny Sunday. A couple strolled with their dogs. Two men flew a glider overhead. A horse and rider rested in the shade. Summer’s last insects buzzed from the grass and trees.

Located three miles west of Yellow Springs, Twin Towers is a popular spot for villagers to romp with their dogs. It’s also a site to observe the fall monarch migration, which has now passed out of our area. The 102-acre park, equipped with equestrian facilities and surrounded by farm fields, is one of 27 county parks and preserves operated by Greene County Parks and Trails. Across the county, the parks district owns and manages just over 3,000 acres of parkland, as well as maintaining 62 miles of paved bike trails.

Financial support of those parks and trails is on the ballot this Nov. 5. With Issue 9, the Greene County parks district seeks a renewal of a five-year, 0.9 mill property tax levy to support its stewardship of local green space — and the recreational and educational opportunities that go along with those preserved pieces of the great outdoors.

“It’s all there to explore,” Greene County Parks and Trails Director Jon Dobney said in a recent interview with the News.

On the job just under two years, Dobney, a veteran of the Ohio state park system, has helped re-energize the Greene County parks district with a raft of infrastructure improvements, new programs and activities and a vigorous new public outreach campaign, developed in concert with locally based company Bing Design.

Recent efforts have doubled attendance at county parks, from 300,000 visitors per year to 600,000, according to Dobney. That figure doesn’t include the more than 1 million annual users of bike trails that crisscross the county. Public response to the county parks’ new visibility, access and amenities has been overwhelmingly positive, in Dobney’s view.

“People are coming up and saying how much they love their parks,” he said.

In addition to launching new programs for children and adults, Greene County Parks and Trails has rehabbed park trails and signage, installed new playgrounds and outdoor fitness equipment, installed or repaired bridges and overlooks and refurbished properties damaged by the May 2019 tornado, among dozens of infrastructure projects highlighted in an informational brochure on Issue 9, the 2019 levy renewal.

These improvements were made possible by the 2015 levy, which has raised an estimated $3.6 million in annual proceeds for county parks and trails, according to current figures from the Greene County Auditor’s Office. County residents pay about $30 per $100,000 of appraised home value annually toard the levy, according to the auditor’s office. In Yellow Springs, appraised values are substantially lower than market values.

The 2019 levy would renew that property tax amount for another five years, beginning in 2020.

The 2015 levy — the parks district’s first — passed by a slim margin of 51% to 49% countywide four years ago. In Yellow Springs, however, the issue received a resounding “yes,” with 80% to 85% of voters in each local precinct supporting the levy.

Funds from the 2015 levy came just in time, according to Senior Manager Chuck Frazier, who has been with the parks district for over 30 years.

“Our infrastructure was about 30 years old, and aging out drastically,” he observed.

Not only that, but the parks district was facing declining fiscal support from the state. State-provided local government funds had dipped to just 25% of the parks district’s budget, with further dwindling predicted, according to Frazier. The county general fund, managed by the Greene County Commissioners, made up the gap, supplemented by a variety of state and local grants.

The 2015 levy gave the parks district fiscal stability and needed funds for deferred maintenance and expanded public programming, according to Dobney.

Established in 1964 and led for many years by Yellow Springs resident Ed Dressler, the parks district has a staff of 30 and is overseen by a three-member parks commission.

Asked to break down the parks district’s current budget, Dobney said that $1 million is set aside annually for bike trail maintenance; $1 million is put into the county general fund to cover staff salaries and related expenses; $100,000 goes toward Owen’s Place, a Beavercreek park for handicapped people of all ages; and upwards of $1.3 million per year goes into park infrastructure and public programs.

That $1 million annually for bike trails is perhaps especially visible to Yellow Springs residents. The Little Miami Scenic Trail runs through the village, and the parks district maintains all 15.9 miles of its passage through Greene County, in addition to four other bike trails in the county.

Greene County Parks and Trails manages all those trails, owned by a total of eight jurisdictions in the county. Parks employees or contractors do everything from blowing off leaves and cutting brush to seal-coating and repaving the asphalt trails, Frazier explained. And the parks district leverages its own funds with grants from other agencies to accomplish those activities, he said.

“We took the burden off of local jurisdictions,” he said of the maintenance services the parks district now provides, a change from when municipalities were responsible for paying for such services in the past.

While Yellow Springs does not have any county parks within its boundaries, parks near the village include, in addition to Twin Towers, Jacoby Road Canoe Launch, with canoe access and picnicking and camping areas, and Pearl’s Fen, a high-quality peat bog located off Byron Road.

The parks district recently made two land purchases adjacent to the fen, partly through a Clean Ohio grant, in order to protect the site from encroaching development and provide public access. The fen is currently being equipped with a boardwalk to allow public access while preserving the plant and animal species that thrive there. Pearl’s Fen is slated to be fully open to the public early next month.

And parks district money has benefited the village directly, according to Dobney.

For example, Greene County Parks and Trails made a $25,000 grant to the Yellow Springs green space fund in 2017, when the Village sought to support local preservation of a portion of the former Arnovitz property, and provided funds to create the food forest on the southern edge of town. In addition, the parks district is currently considering funding part of the proposed restoration of a strip of Village land adjacent to the bike path on the Bryan Center property.

“We’re trying to spread the wealth and be relevant in every community in the county,” Dobney said.

Getting more people into county parks and giving them a wider range of activities to enjoy has been a guiding goal of his tenure so far.

In 2018, the parks district hired a consultant to survey county residents about their wants and needs relevant to county parks. The message that came back was clear, according to Dobney. People desired more amenities such as bathrooms and seating, more recreational opportunities and more programs for all age groups.

“We asked people what they wanted, and we responded to what we heard,” Dobney said.

Even as it expands its recreational offerings, the parks district is also committed to preservation of the lands under its care, according to Dobney. Staff constantly work to eradicate invasives, particularly in ecologically sensitive areas, and to encourage the growth of native plants.

At Twin Towers, the parks district got criticized by some local residents for mowing the fields in late summer, thereby cutting down milkweed and other plants important to monarch butterflies. While the mowing was undertaken to keep thistle in check, the parks district has developed a plan for next year that will keep four plots unmowed through the summer. These plots are intended to serve as “monarch butterfly waystations,” according to Dobney.

“We want to be good stewards and show that we’re worthy of the trust,” he said.

Asked if he had a favorite park in the county system, Dobney demurred.

But then he mentioned Indian Mound Reserve, outside Cedarville, as the “crowning achievement” of the parks district’s recent revitalization efforts. Once so overgrown that Cedar Cliff Falls weren’t visible, the park has been transformed with a new bridge, new overlooks and new trails that connect what are essentially three parks into one system.

“We’ve opened up opportunities,” Dobney said. “That’s really what our work is about.”