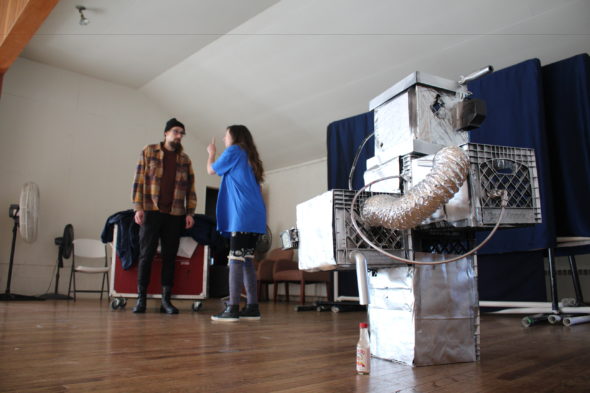 Colton Pitstick and Charlotte Walkey rehearse a scene from "Large Box — A Conundrum" at First Presbyterian Church, while a mysterious machine looms in the foreground. "Large Box" was performed as part of the fifth annual 10 Minute Play Festival earlier this year. (Photo by Lauren "Chuck" Shows)

The YS Theater Company is currently seeking submissions for the 10 Minute Play Festival. The annual event, now in its sixth year, typically features a series of brief, one-act plays, written by playwrights from the Miami Valley and beyond, directed and performed by community members.

Playwrights who are interested in submitting their scripts should send an email of introduction to ystheatercompany@gmail.com, including contact information and a brief synopsis of their play. Plays may be either dramatic or comedic.

Playwrights do not need to have been previously produced in order to submit; both first-time and veteran playwrights are welcomed. Scripts should be approximately 10 minutes in length, with longer submission to be considered; plays longer than 20 minutes will not be considered.

The deadline for submissions is Saturday, Nov. 30, and scripts should be attached as PDF files.

All Ohio playwrights will be considered, with first consideration given to Miami Valley authors. Chosen plays will be announced by the first week of December, with playwrights notified via email. Casting will take place in December, with rehearsals beginning in January; the festival is slated for one weekend, Friday and Saturday nights, in early February. There is no compensation for participation in the festival.