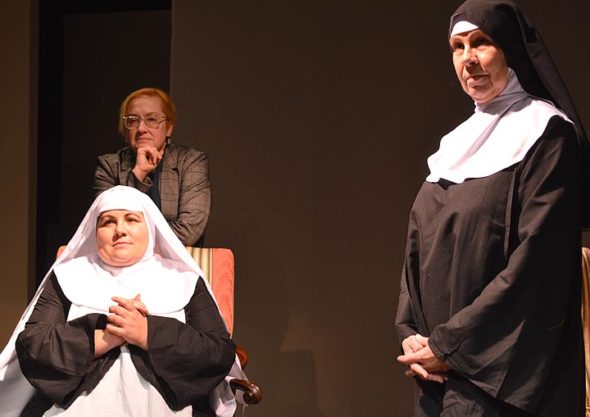 Clockwise, from back left: Dr. Martha Livingstone (Lorrie Sparrow-Knapp), Mother Miriam Ruth (Cynthia Karns) and Sister Agnes (Lauren Shows) on the set of the YS Theater Company’s production of John Pielmeier’s “Agnes of God.” The play, which opens on Thursday, Nov. 21, follows the struggle of Dr. Livingstone, a court psychiatrist, as she examines and builds a relationship with Agnes — who has been implicated for the murder of her baby — against the wishes of the stern Mother Miriam Ruth. (Photo by Nora Jaara)

A trinity of actors in ‘Agnes’

The Yellow Springs Theater Company returns this month with “Agnes of God,” a thoughtful drama that explores faith and religion in the midst of a murder mystery.

The play, set in the early 1980s, features three women characters: court-appointed psychiatrist Dr. Martha Livingstone, a young nun, Agnes, who is accused of killing the baby she gave birth to in a convent; and the convent’s Mother Superior, Mother Miriam Ruth.

According to Director Amy Wamsley, the play follows three women at very different stages of their lives and encompasses universal themes.

“The world of ‘Agnes of God’ is really based around faith, fear, and love. … Even though it’s about two nuns, it’s not strictly a religious play,” Wamsley said.

The production contains adult themes and is not suitable for young children. Those below the age of 18 must be accompanied by an adult.

Wamsley, 44, said the theater has a capacity of 50 people, and she hopes to have a full house for every showing. “Agnes of God” is the second production she has directed for the theater company.

Wamsley, who lives in Yellow Springs, received her degree in theater and design with an emphasis in stage management from the University of Cincinnati in 1997. She went on to receive an MBA from Wright State University in 2005.

She said she has been fascinated with the play since she saw its movie adaptation as a child in the mid-80s. Wamsley, who was raised Catholic and attended Catholic school, said she always struggled with faith but remained fascinated by religion.

The big questions the play asks regarding faith and love are what make it relevant to people, regardless of one’s religious beliefs, according to Wamsley.

“It’s a really complicated piece of theater and very intimate,” said Lorrie Sparrow-Knapp, who plays Dr. Martha Livingstone. “There are some broken people at the heart of this story.”

Sparrow-Knapp, 54, teaches performing arts at Yellow Springs High School and lives in Springfield. She also serves as the artistic director for the YSTC.

Sparrow-Knapp described the play as a powerful and well-written piece that contains challenging material. That includes the exploration of science versus faith, an issue she said is at the heart of our culture.

Lauren Shows, who lives in Yellow Springs and works at the Yellow Springs News, plays Agnes. Shows, 35, described Agnes as somewhat childlike and said she took inspiration from her own child in playing the character.

Shows further described her character as someone who was challenging to play and who has built emotional walls to deal with trauma.

Cynthia Karns, who plays Mother Miriam Ruth, said doing a play with only three people in it was both interesting and challenging. Karns, 66, is a retired public defender from Montgomery County and currently lives in Centerville. “Agnes of God” is her first show with the YSTC.

According to Wamsley, about 20 people are currently members of the theater company, a 501(c)(3) charitable organization.

The actors acknowledged the importance of supporting local theater and the arts, and they encouraged people to see the play.

“Where else are you going to engage with this kind of material?” Shows said. “Making theater accessible — making all kinds of art accessible — is important.”

According to Sparrow-Knapp, Yellow Springs and artistic excellence go hand in hand, and the theater company aims to serve and challenge its audiences.

“We have quality theater here in this town, and people should come and see it and come support it,” Sparrow-Knapp said. “Arts are embedded here, and it’s part of who we are.”

Wamsley stressed the importance of having a full house for each showing. Finding affordable performance space can be a challenge for small theater companies, and the YSTC struggles with the same issue, according to Wamsley.

She also said she wanted the play to engage the audience and hoped to encourage conversation.

“My hope is, it makes them look inside themselves, as well as inside these characters,” Wamsley said.

* Jaara is a freelance writer for the News based in Fairborn. She can be reached at norajaara@protonmail.com.