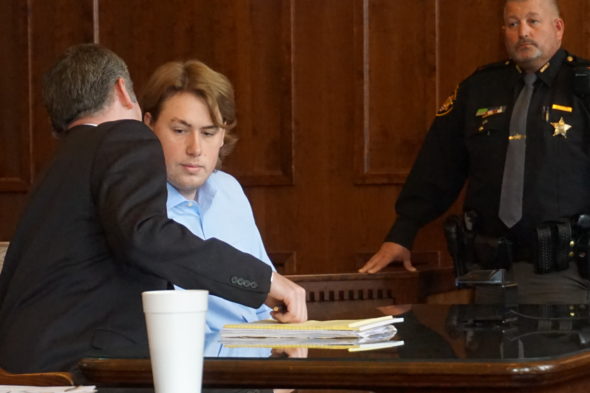 Zyrian Atha-Arnett (center) on Thursday, Nov. 21, entered a not guilty plea in Greene County Common Pleas Court to two counts of murder and one count of felonious assault in the stabbing death of Leonid "Lonya" Clark earlier this year. (Photo by Carol Simmons)

In arraignment proceedings Thursday afternoon, Nov. 21, at the Greene County courthouse in Xenia, defense council for area resident Zyrian Atha-Arnett entered a plea of not guilty to two counts of murder and one count of felonious assault in the stabbing death earlier this year of local man Leonid “Lonya” Clark.

Atha-Arnett, 26, who appeared in Judge Michael Buckwalter’s courtroom wearing a light blue shirt and dark pants, has been held in the Greene County Jail since his arrest Friday, Nov. 8.

He did not address the judge except to verify the pronunciation and spelling of his name.

Andrew Schlueter, of the Greene County Public Defender’s Office, entered the not guilty plea on Atha-Arnett’s behalf, with no additional comment on the charges. Schlueter informed the judge that Christopher Beck, also with the public defender’s office, is representing the defendant as well.

In response to the not guilty plea, Assistant Prosecuting Attorney Bill Morrison, on behalf of the prosecutor’s office, asked that bail be set at $900,000, with no percentage payment. The judge agreed, noting that the amount was the same as previously set at Atha-Arnett’s indictment, and so would continue unchanged.

The prosecution is not pursuing the death penalty. A sentence of 15 years to life is attached to each of the two murder counts. Sentencing on the felonious assault charge is unspecified.

Buckwalter set a jury trial for Jan. 27, but such cases are frequently pushed back by a variety of possible requests from either side.

Approached after the hearing, defense attorney Schlueter said he wasn’t “at liberty to speak about the case.”

Several people close to Atha-Arnett were present in the courtroom, but a family friend in attendance said they didn’t want to comment.

Members of Clark’s family also attended. Later Thursday afternoon, Clark’s father, Eric Clark, said he and his wife had been prepared by the prosecutor’s office to anticipate the possibility of a not guilty plea, which isn’t unusual at the beginning of a case, especially if a defendant hasn’t secured counsel.

He said they also had been asked in advance if they opposed Atha-Arnett’s request earlier this week to appear in court unrestrained and wearing street clothes and if they opposed keeping the bail at $900,000.

Eric Clark said they didn’t object to any of the requests.

“Our family has decided that he should be granted some human dignity,” he said.

He added that he also didn’t feel any animosity toward the people who attended on Atha-Arnett’s account, and appreciated meeting those who were unfamiliar to him.

“It puts the human side to it all,” Clark said.

Atha-Arnett, who attended Yellow Springs Schools through 10th grade, was in the same grade as Lonya Clark, and the two had maintained a friendship since childhood. In recent years Atha-Arnett has lived in Enon, and Clark lived with him briefly several years ago, according to Eric Clark.

Lonya Clark, who would have turned 27 on Saturday, Nov. 16, was reported missing in early February after not being seen since Jan. 13. His fully clothed body was found three months later on April 12  by mushroom hunters in Glen Helen Nature Preserve, on the bank of the Little Miami River near Grinnell Road bridge. The coroner’s office ruled the cause of death as multiple stab wounds to his head and neck.