A tribute to YSHS 2020 senior athletes: track and field

When Ohio school buildings were ordered to remain closed for the rest of the school year on April 20, the 2020 spring sports season for schools was canceled as well.

At Yellow Springs High School, pre-season practices had been underway for a few weeks when schools were shuttered mid-March. After off-season preparations, and with plenty of returning talent, local squads were ready for standout seasons.

With the support of the Yellow Springs High School coaches, the News will highlight all the spring sports senior athletes and their career accomplishments. This week, we look at track and field.

In mid-March, after three weeks of initial conditioning and three more weeks of practice, the Yellow Springs High School track and field team was ready for a successful spring season.

Members of the girls team were feeling confident they could defend their Metro Buckeye Conference championship, with some athletes on the team eyeing trips to the district, regional or even state meet, according to Coach John Gudgel in a recent interview.

“There were high expectations,” Gudgel said of the girls squad.

The boy’s team, meanwhile, had an impressive 18 athletes on the roster, the most in recent years, all centered around a “strong nucleus of talent,” Gudgel said.

Ohio schools, however, were closed before the team could participate in its first meet. And at the end of April, the spring sports season was canceled outright. At YSHS, six seniors will miss their final season of track and field.

For Gudgel, who has coached track locally for 38 years, it was hard to give up the season.

“We had the opportunity of working with so many young athletes who were excited about the upcoming year and working hard,” Gudgel said. “It saddens us as coaches.”

With the support of the Yellow Springs High School coaches, the News will highlight all the spring sports senior athletes and their career accomplishments. Last week we covered tennis, and next week we will profile softball and baseball athletes. 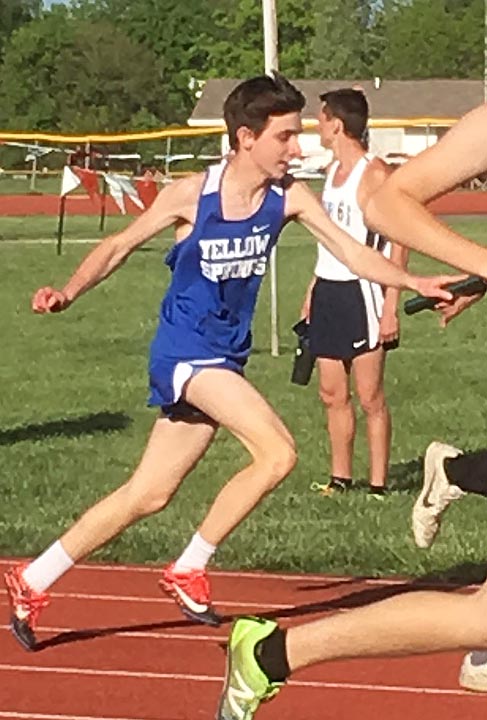 Phillip Diamond is a sprinter who has run track for the last two years. According to Gudgel, Diamond overcame several injuries and was gearing up for a “breakout year.” “At the end of last year, he started to realize his potential as a sprinter,” Gudgel said. “We were excited.” Diamond, who also ran the 100- and 400-meter relay, was a member of the relay team that placed third at last year’s league meet.

Lydia Fleetham is a four-year track and field athlete who has participated in multiple events for the team. Fleetham “has been a versatile and valuable contributor each year,” Gudgel reflected. “It’s rare to have a four year letter person,” he added. Starting out in the long jump, Fleetham primarily became a hurdler and relay runner. Last year she took fourth place at the league meet in the 100-meter hurdles.

Ivy Tebbe was a standout distance runner for the track team. It would have been her fourth year with the team. She excelled in the 1,600-meter run, and was a key member of the cross country team as well, where she helped lead the team to a league championship, according to Gudgel. “She definitely was one of our long-distance stalwarts, a valuable contributor in the 1,600,” Gudgel said.

Sean Adams was set to participate in his first track and field season. A soccer player, he had “a world of potential” in track, according to Gudgel. Adams was set to run the 400-meter race for the team and also participate in the 1,600-meter relay. “He really showed flashes of brilliance,” Gudgel reflected. “He certainly was going to be a valuable asset to our team.”

Harper Mesure was a distance runner and shot putter who would have competed in his fifth season after being granted an extra year of eligibility. In addition to throwing the shot put, Measure competed in the 3,200 meter, a two-mile run. “Talk about a rare combination, when a shot putter wants to run two miles. But that’s Harper,” Gudgel reflected. After the initial order closing schools, Gudgel would see Mesure running around town to stay in shape.

Chanel Phillips had recently come back after an injury and was to participate in the discus and shot put competitions. At last year’s league meet, she placed third in the discus. “We felt that there was an opportunity for her to potentially win the discus in the league this year,” Gudgel said. Phillips was well conditioned and improving rapidly in the discus, which requires sound technique, not just brute strength, according to Gudgel. “The majority of those successful in discus, they win because of the technical aspects. She learned it really quick.”