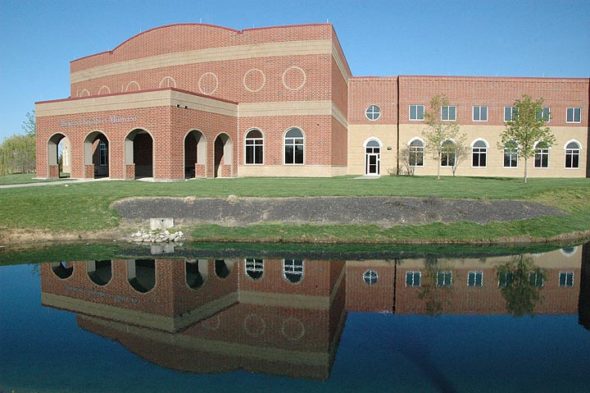 Antioch University Midwest, or AUM, has been largely eliminated as a separate campus in the Antioch University system, and the Yellow Springs building is once again for sale, after being taken on and off the market several times in recent years.

Antioch University’s main website no longer lists the campus on its pulldown menu of AU campuses — which include New England, Santa Barbara, Los Angeles and Seattle — and many sections of the Midwest portion of the site are outdated or defunct. Recent press releases do not list AUM as among the university’s campuses.

But according to AU President/Chancellor Bill Groves this week, that’s because the Midwest campus is no longer offering “placed-based” graduate or undergraduate programs, following a pullback announced in 2018 and completed last year.

“We sunsetted all our placed-based programs,” he said.

Midwest program faculty, including the campus provost and chair of undergraduate studies, are no longer employed by the university. A few have moved into AU Online, the university’s online division, Groves said.

That division is currently housed at the Midwest campus — though more accurately, there is now “no distinction” between AU Online and AUM, according to Groves.

About 25 employees work in Yellow Springs, in the areas of AU Online, AU administration and the universitywide PhD in Leadership and Change program. Many of these employees are currently working from home due to COVID-19.

While Groves previously predicted strong growth in online programs, AU Online is a relatively modest part of the overall university. Fall 2019 enrollment was 221 out of a total enrollment of 3,354 across the university’s seven campuses and divisions, according to figures reported to IPEDS, a federal higher education database.

AUM remains in that database, with 24 enrolled students, mostly graduate students, reported for fall 2019. Groves said this year’s enrollment is probably comparable, with some of those students enrolled in an MBA program for employees of Premier Health.

The Midwest campus also serves as the site of periodic in-person residencies for some of the university’s low-residency graduate programs — mainly because of its abundant space, according to Groves.

Low-residency programs combine distance learning and in-person components. However, no in-person residencies are scheduled at least through July 1, 2021, due to COVID-19. All AU campuses are closed until that time, Groves said.

In another recent development, the Midwest building is once again on the market — though if the facility sells, the university might consider leasing back some space for AU Online or university administration.

While the university has engaged a broker, the facility is being offered for sale quietly, with no “for sale” sign in front of the campus. The property is also not listed on the commercial real estate website LoopNet.

There is no set asking price in part because the price would depend on the prospective buyer, according to Groves.

While he declined to speculate on likely buyers, Groves said growth at Wright-Patterson Air Force Base could lead to a buyer. That’s especially true because at 95,000 square feet, the AUM building is one of the area’s largest and would require a buyer with larger-scale plans, he added.

“There aren’t many buildings this size,” he said.

Controversial from the start, the Midwest campus, then named Antioch University McGregor, was located away from its former site on the Antioch College campus in 2007. The new building was constructed on 11 acres of land paid for by the Village and community foundation and annexed into Yellow Springs in an effort to retain AUM locally. The facility’s large size was based on projections of significant enrollment growth, which never materialized.

The Midwest facility cost $13.5 million to build in 2006, according to Groves.

Echoing earlier comments to the News in 2018, Groves cited broad trends behind AUM’s declining fortunes, including changes in state law and competition from other programs for shrinking numbers of college-aged students in Ohio.

“Ohio is a very tough market right now,” he said.

Among the programs eliminated last year are Midwest’s master’s in education program, a former powerhouse, and its “3+1” degree completion programs for undergraduate studies, undertaken in partnership with area community colleges.

The master’s in education program was “decimated” by changes in state law that removed incentives for public school teachers to seek graduate degrees in education, according to Groves. That led to significant revenue declines for AUM, he added.

And the more recently developed undergraduate degree completion programs ran afoul of a proliferation of such programs across the state, as well as limited revenue flows to AUM, he said. The “3+1” model had students paying tuition to AUM for just one year for overall cost savings in earning a bachelor’s degree.

Over the past five years, AUM announced a series of “articulation agreements” — formal partnerships — with several area community colleges, including Sinclair, Clark State and Southern State, in Hillsboro, in an effort to recruit more undergraduate students. Those agreements are no longer active, Groves clarified. Students who remain in the programs have been moved to AU Online.

According to past News reporting, AUM experienced declining enrollment from the time it moved from the Antioch College campus in 2007 to its current location. Enrollment dropped from a high of about 700 prior to the move to 120 in 2018, when the university announced it would be cutting staff and eliminating Midwest’s “place-based” programs.

But contrary to declines at AUM, the university as a whole is thriving, according to Groves. Psychology and counseling are the university’s largest programs, which are tied to state licensure. Graduate programs are “exploding” in southern California, and seeing strong growth in New England and Seattle, Groves said.

“Overall, we’re doing really well — but not in Ohio,” he said.

With its emphasis on nonresidential graduate programs, allowing it to pivot to distance learning, AU hasn’t been disrupted by COVID-19 to the same degree that residentially based colleges and universities have, according to Groves.

“We’ve had a really successful summer and fall, despite COVID,” he said.

Groves didn’t rule out restarting programs in Ohio again at some future point. And he suggested that if and when the Midwest building sells, the university might maintain ties here, such as by leasing back space for AU administration.

A former Springfield lawyer who previously served the university for 30 years as outside legal counsel, Groves stressed the historical importance of Yellow Springs to the university system it originated.

“It’s our last roots in Ohio. There’s a connection that we don’t want to lose,” he said.

One Response to “Antioch University Midwest absorbed, building for sale”