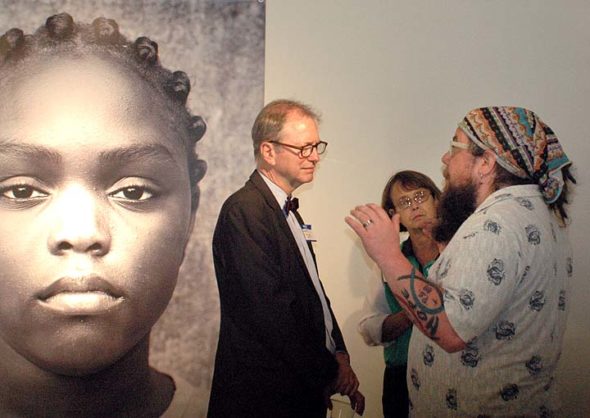 Antioch College President Tom Manley will step down from the presidency on Dec. 1, ahead of a previously announced departure at the end of June. He is pictured here at Antioch's Herndon Gallery in September 2016 holding a meet-and-greet with villagers. (News archive photo by Audrey Hackett)

Tom Manley to step down from Antioch College presidency Dec. 1

Antioch College President Tom Manley is stepping down from the presidency earlier than planned due to health issues.

Manley will become “president emeritus” as of Dec. 1, he announced in an email to the college community on Friday, Oct. 30. Antioch College previously announced in August that Manley would be leaving his post at the end of his five-year contract next June.

Interim leadership of the college will be shared by three Antioch College trustees. Sharen Neuhardt will handle operations, John Jacobs will oversee finance and Shadia Alvarez will lead equity and strategic development. Neuhardt and Jacobs have been serving in senior operational roles at the college since May, according to previous News reporting.

The interim arrangement will continue until a new president is appointed. Details about that process have not yet been made public.

As president emeritus, Manley will collaborate with Antioch College trustees and others “primarily in an advisory capacity,” and will handle “strategic projects and partnerships that advance Antioch College Works,” he wrote in the email announcing his departure.

Manley identified his health issues as being related to treatment for prostate cancer.

As the second president of the relaunched Antioch College, Manley has served during a time of challenge and change. During the first months of his presidency, Antioch achieved accreditation from the Higher Learning Commission, culminating a multi-year process. Manley subsequently spurred a redesign of the college curriculum and new marketing efforts aimed at recruiting more students.

Manley also oversaw Antioch’s early response to COVID-19, when the college pivoted quickly to online learning and developed a plan for reopening its campus this fall.

Additionally, Manley helped architect and launch a new program called Antioch College Works, which provides free tuition for lower-income students and expanded work opportunities during college and after graduation. College leaders have credited the program with boosting enrollment this fall.

In his Oct. 30 email, Manley described being Antioch College’s president “the honor of a lifetime,” and underscored his belief in the college’s relevance and importance as “a community of learning emboldened by the difficulties of the time.”

Read the News’ prior article about Manley’s planned departure here.