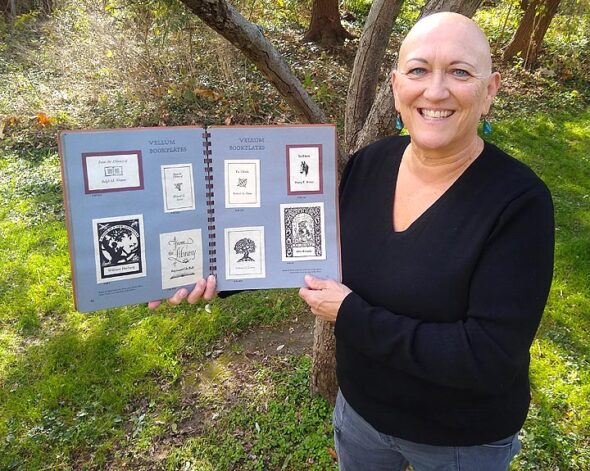 Bookplate Ink owner and operator Karen Gardner, pictured with a collection of bookplate designs, some of which date back to the 1930s. (Photo by Megan Bachman)

Over the course of nearly 100 years, avid readers around the world have labeled their personal libraries using bookplates from Yellow Springs. Now, bookplate lovers both near and far can support the village’s iconic nature preserve, Glen Helen, with a new fundraiser bookplate from Bookplate Ink — a company with ties to local history as long as the Glen’s.

The new bookplate features a print of a well-known oil painting of the Glen Helen steps created by local plein air artist Travis Tarbox Hotaling. Karen Gardner, owner and operator of Bookplate Ink, said that all profits from the sale of the bookplates will benefit the Glen Helen Association, the nonprofit that purchased the Glen from Antioch College this year after the 91-year-old nature preserve was threatened with closure.

“I’ve had the idea since the Glen Helen Association started raising money this summer — it just took me a while to implement it,” Gardner said. “[Hotaling] was very helpful as we put it together.”

Most villagers know at least some of the Glen’s history — most notably, that the land on which Glen Helen sits was donated to Antioch College by Hugh Taylor Birch in memory of his daughter, Helen, in 1929.  Many are unaware, however, that Bookplate Ink’s roots go back a few years earlier.

The story begins — as so many local stories do — at Antioch College. As the tale goes, in 1926, Antioch students Ernest Morgan and Walter Kahoe noted that there was an abundance of paper waste at the college’s print shop, where both of the young men worked. The two put their heads together and struck up a deal with the college: in exchange for some janitorial work, they’d be able to use the loose paper ends — and the print shop’s machinery — to create bookplates to sell.

Thus was born the Antioch Bookplate Company, arriving on the scene at what was arguably the tail end of the zenith of bookplate usage in the United States. Printed bookplates — also referred to as “ex libris,” after the Latin for “from the library of,” which often precedes the name of a book’s owner on a bookplate — are nearly as old as Gütenberg’s printing press itself. Though originally used primarily by monasteries and European nobles, by the late 19th century, they were used more widely by middle class readers.

After the Antioch Bookplate Company was formed, Morgan hit the road to make bookplates even more accessible to the middle class. Sometimes hitchhiking, he sold the fledgling company’s bookplates — many of which featured art by Antioch students — to book sellers around the Midwest.

“It could be kind of costly to get a custom bookplate made back then, but when [Morgan] started doing bookplates, his idea was to have universal designs that could be personalized with just a name, and that made them more affordable to everyone,” Gardner said.

Over the years, the Antioch Bookplate Company would feature bookplates designed by such artists as Benton Ferguson, an illustrator for magazines like Vanity Fair and The Saturday Evening Post, as well as local artists and designers Read Viemeister and Jean Rudegeair, to name a few. One of the company’s most enduring designs — a book enshrouded by the roots of a tree — was created by artist and former Antioch faculty member Robert Whitmore in the 1930s. The company expanded over the decades, buying out smaller bookplate companies around the country and eventually acquiring exclusive licensing rights to print Disney characters.

“In the 1930s to the ’50s, Antioch was the biggest seller of bookplates — probably in the world,” Gardner said.

Ernest Morgan retired and was replaced at the company’s helm by his son, Lee Morgan, in 1971. The company expanded to products like bookmarks and journals and, in 1981 — by then a multi-million-dollar operation — was renamed The Antioch Publishing Company. Around this time, Lee Morgan found that the demand for personalized bookplates — as opposed to mass-produced ones — had diminished. However, the company had some longtime, diehard personalized bookplate customers.

“The company had promised their customers that they could always get their favorite [personalized] bookplate in the future,” Gardner said, noting that the company had kept these designs on file for decades.

With these customers in mind, Lee Morgan struck up a deal with then-co-owner and printer of the Yellow Springs News, Ken Champney. The News would take over printing these personalized bookplates using its own letterpress equipment and keep any profits, and The Antioch Company would hand over a large compendium of classic designs for the News to use.

Gardner was hired by the News in 1990 for a variety of duties — “I don’t even know what the official job title was,” she said — including processing bookplate orders. The following year, she became part owner of the paper and began to focus more on the bookplate business, which Champney had renamed My Own Bookplate to distinguish it from the Antioch Publishing Company.

“We would probably get a few orders each week — but we weren’t making much money with it,” Gardner said.

With the News office’s small staff and the fairly small return for labor in mind, Gardner said the News’ owners had considered selling the business several times over the next decade — but none of them had the heart to let go of the bookplates. By 2004, Gardner was ready to leave the News to pursue a master’s degree in special education — but she couldn’t leave the bookplates behind. Rather than cash out her owner’s shares in the News, she traded the shares for ownership of the bookplate business.

“Nobody else was really interested in keeping [the bookplate business] up, so for a little while there I was getting my master’s and teaching and doing the bookplates — I don’t think I sat down at all that year!” Gardner said.

With Gardner at the helm, the bookplate business became a one-woman operation and changed direction — for a start, she changed its name to Bookplate Ink.

“I thought it was a clever play on words, but it’s become kind of a nuisance because people always think it’s ‘Inc.’ for ‘incorporated’ — I kind of did myself in on that one,” Gardner said with a laugh.

Next, Gardner built a website for the business and began accepting payments via credit card — something the News had never done and wouldn’t do for another decade after Gardner left. The transition more than doubled Bookplate Ink’s business; Gardner recalled that, a few days after making the option for credit card payments available on the Bookplate Ink website, she went on vacation.

“When I came back a week later, I was stunned by how many orders we’d gotten,” she said. “I really think, in some ways, that the business just needed somebody to pay more attention to it.”

Gardner moved to Orlando, Fla., in 2007, where she operated Bookplate Ink for several years — though she said she kept her P.O. box in Yellow Springs just in case.

“Almost as soon as I moved down there, I kind of wanted to come back,” she said.

While Gardner was in Florida, The Antioch Company, from which Bookplate Ink sprang, began a steady decline — it sold the publishing arm of its business to an Indiana company in 2008 and filed for bankruptcy the same year, temporarily bouncing back in 2009. By that time, the company had switched all of its focus to Creative Memories, its direct sales photo album and scrapbooking division, which had been established in the late 1980s. Creative Memories moved out of the village in 2012, and was sold in 2015 amid further bankruptcy and lawsuits.

In 2014, Gardner and her husband, Kevin Stokes, moved back to the village, where Bookplate Ink continues to do steady business. Every week, Gardner sends orders around the world in custom boxes, which were designed by current YS News designer Matt Minde. Along with more than 150 traditional personalized bookplate designs, Bookplate Ink also offers pre-printed, non-personalized bookplates — to be filled in by the owner’s hand — at a less expensive rate, continuing Ernest Morgan’s vision of making bookplates accessible. Nevertheless, Bookplate Ink has attracted some big names over the years, fielding orders from journalist Charles Kuralt and former President George W. Bush, among others.

Though bookplates are certainly not as popular as they were in the late 19th through mid-20th century, Gardner said their utility continues — sometimes in unexpected ways. For example, much of Bookplate Ink’s bread and butter comes from authors, who will often order bookplates featuring custom book art to sign and offer as promotional materials, crowdfunding rewards and as gifts to customers. Gardner said she has received an uptick in these kinds of orders as the pandemic has continued, as authors are often unable to go on book tours and sign books for fans in person.

The biggest order Bookplate Ink ever received, however, was not from a political figure or an author, but from a couple in their twilight years, who ordered 13,000 bookplates for their personal library.

“The husband died about a year later, and the wife wrote to me and said that the two of them had had a really nice time putting the bookplates in the books together and talking about the memories surrounding the books,” Gardner said. “It was a really sweet story.”

It’s stories like these that make the work worthwhile for Gardner, who said the day-to-day duties can often be tedious or frustrating — especially cutting the bookplates from sheets to individual rectangles, as the industrial cutter she uses “has its own personality and sometimes seems a little grumpy,” she said.

The human connection keeps Gardner invested in her work, and she prides herself on her relationship with her customers, many of whom have been ordering bookplates for decades.

“That’s one of the things I really love — I’ve spoken to some of the same people for years,” she said. “Even though I’ve never met many of them, I kind of think of them as friends.”

Bookplate Ink’s new bookplate, which benefits the Glen Helen Association, is available for purchase online at bookplateink.com. For a deep dive into archived art from the Antioch Bookplate/Publishing Company from the 1930s through the 2000s, visit yshistory.org and click on “Bookplate Blog Posts.”

2 Responses to “Bookplate Ink— The village’s history in bookplates”