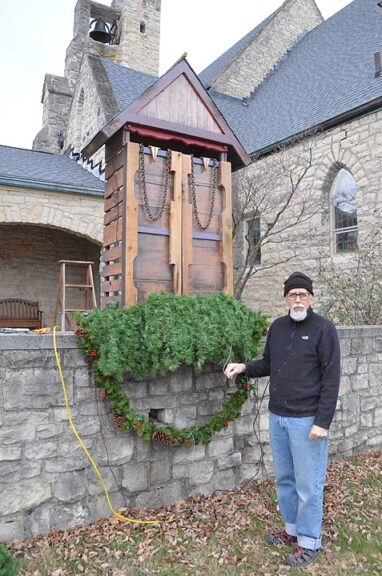 Visual artist Brian Millar stands by the creche he built last year for the First Presbyterian Church. The structure had to be weatherproofed and moved outside because Christmas eve services were held online. (Photo by Matt Minde)

Christmas eve outside at the First Presbyterian Church

In 2017, visual artist Brian Millar created a large, 6 by 16 foot painting for the First Presbyterian Church of Yellow Springs. For the project, the church had accommodated him with space in the basement, which he now keeps a studio, in exchange for taking care of the building. 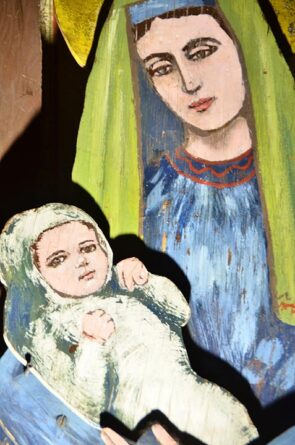 The Madonna and Child figures created by Brian Millar’s mother almost 70 years ago adorn the creche he built outside the First Presbyterian Church. (Photo by Matt Minde)

Last year, Millar created a creche — a tableau representing the scene of Jesus Christ’s birth — for display in the lobby of the church during the Christmas season. The structure was crafted out of various materials, including reclaimed wooden pallets, to house figures depicting the holy family — Joseph, Mary and baby Jesus — made by Millar’s mother in the 1950s, who had a fine art degree and taught in Cincinnati high schools.

Because of the pandemic, Millar decided to mount the creche outside this year, in front of the church. That involved weatherizing, securing and lighting the structure, as well as mounting the almost 70-year-old figures. True to tradition, the creche was not opened until the evening of December 24.

The creche will remain outside and open for a while for passersby to view.