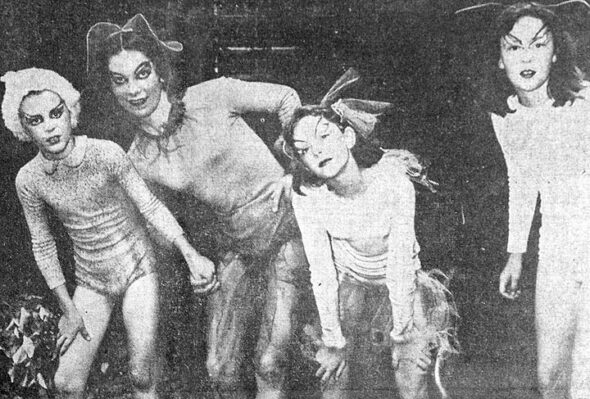 Famed actor and former villager John Lithgow was the headliner for the recent Antioch College online fundraiser event, Antioch Under the Stars, held on Saturday, Jan. 23. The Tony, Emmy and Golden Globe-winning actor is the son of the late Arthur Lithgow, founder of the world-renowned Shakespeare Under the Stars. John Lithgow began honing his acting craft right here in the village: he’s pictured in this YS News archive photo, at left, in the 1954 Shakespeare Under the Stars production of “A Midsummer Night’s Dream,” along with his sister, Robin, at right. (YS News archive photo)

Local businesses try harder when village economy slows. “In the midst of a continuing national recession, business at most downtown merchants remained steady or slightly down in 2010 as fewer tourists and local customers patronized the town’s shops and restaurants.”

Council says ‘no’ to fluoride. “At their meeting on Jan. 18, members of Village Council voted to discontinue the practice of putting fluoride in Yellow Springs water.”

Ellie “Gabby” Mason dies at age 72. From the 1991 proclamation of Gabby Mason Day by Mayor Jean Hudson, “Gabby Mason has provided sustenance to all who need or ask, both physical and spiritual, without asking for anything in return, … embodies the spirit we seek to nurture in Yellow Springs, that being the spirit of community and sharing.”

Schools shrink. “Superintendent Lloyd Benham submitted school enrollment figures for the years beginning 1968–72 that show a decrease of over 100, from 1,153 to 1,049. … Mr. Benham attributed decreased enrollment to the use by college students of much of what low-cost housing is available in Yellow Springs, making it harder for families with children to find housing in the village.” [Current school enrollment is 685, including 136 open enrollment students from outside our district.]

Night school for adults at YSHS. “Ten weeks of adult classes, sponsored by the public school, will start next week at YSHS. Joseph Anthony, who began the program for the school board in 1968, continues to direct it this year. Classes include typing, German, French, Spanish, auto mechanics for women, physical fitness for women, woodworking, knitting, photography, sewing and dog training.”

Baldwin spots fire. “A fire alarm at 5:35 Friday brought the village pumper and two or three score spectators to a grass fire in Glen Helen. A train had passed by the place at which the fire took place, less than one hundred yards from the Antioch College power plant, a short time before. It is assumed that a spark from the locomotive caused the blaze. … Robert Baldwin, age 12, spied the smoke, notified Frederick Lemcke who took a squad of college men with rakes and brooms to the scene.”

Furays buy drug store. “New Year’s Day saw Mr. & Mrs. Paul Furay behind the counters and in charge of Finley’s Drug Store, which they purchased recently from A.H. Finley, Washington Court House. Mr. Finley owned the store most of the time since 1914.”

“Mrs. Dick Denison was the victim of a surprise Sunday when on returning from church services she found about twenty relatives who had gathered in her absence with well-filled baskets and had prepared dinner. No hard times were in evidence for the table fairly groaned with good things.”