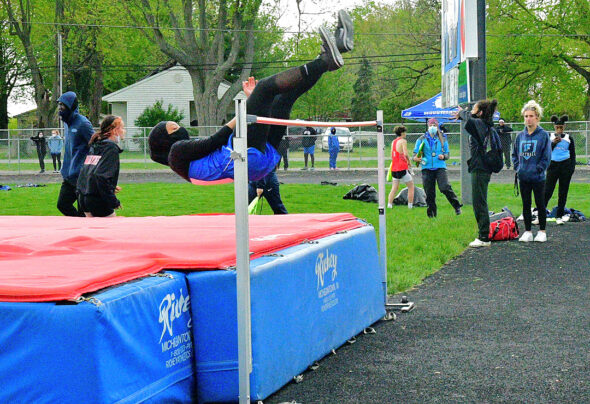 Wet weather washed out all but one Bulldog softball game last week; and that contest, Friday, May 7, against Legacy Christian, finished in steady rain. Although the Bulldogs jumped out early for a 7–1 lead, they watched Legacy storm back with 19 unanswered runs. The final score was 21–10.

“Weather was a factor again tonight — it’s been that kind of spring,” Coach Jim Delong said after the away game.

The Bulldogs started strong as junior Sophie Lawson led off with a walk and promptly stole second and third base before scoring on a single by senior Bre Wallace. Then Joslyn Herring, Halee Sparks and Hailey Burk all had RBI singles, and Yellow Springs jumped out to a five-run lead.

“It was nice to jump out to a quick lead this game — we’ve been slow starters all year,” DeLong said. “Lawson really set the tone for the inning, with the walk and two stolen bases. She’s by far the league leader in stolen bases this year,” the coach added.

Yellow Springs senior pitcher Hailey Burk held the Knights to one run in the bottom of the first inning, thanks to a heads-up play by shortstop Lily Rainey. Backing up a throw that got past the third-base player, Rainey fielded the ball and fired it to home plate, getting the Legacy runner out by 10 feet.

“Rainey has been my top defensive player the past two weeks, and her strong arm and heads-up play to back up the throw paid off in that inning,” DeLong said.

Then the rains came. Legacy plays on a turf field, so the game continued, and the Knights came charging back with a 12–run second inning to take a lead they never relinquished.

A bright spot for the Bulldogs was freshman pitcher Violet Babb, who came into the game to pitch the last two innings and gave up only one hit and one earned run.

“Babb is a quick study and has really developed her pitching as the season has progressed. She did a fine job in adverse weather conditions tonight,” the coach said.

Doubles duo seeded No. 1 for tourney

The Bulldogs enter sectionals play this week after the completion of all but one of the regular season matches. The team record stands at 9 wins and 4 losses.

Individually, Henry Smith-Heston leads the team in singles play with a 10–3 record. Doubles duo Ethan and Jason Knemeyer have played exceptionally well this season, with 12 wins and one loss, earning them the No. 1 seed in the sectional tournament, scheduled Tuesday, May 11, at Troy Park. (Sectional results were not available before press time).

Come cheer on the Bulldogs for their final regular season match at 4:30 p.m., Thursday, May 13, when they get another chance to beat Miami Valley School on the Yellow Springs home court on the Antioch College campus.

Yellow Springs Baseball was no match for the weather last week as two of the three games scheduled were washed away by rain. Tuesday’s game against Middletown Christian and Wednesday’s game against Trotwood-Madison were both canceled because field conditions were not playable. YS Athletic Director Jeff Eyrich is working to get the two contests rescheduled before the start of the sectional tournament.

The lone game, Thursday, May 6, was the second scheduled game of the week against Middletown Christian. The Eagles celebrated their senior night by honoring their single senior. As luck would have it, that senior pitched and had a strong showing, giving up only one hit and one run. That one hit was a doozy, though, as freshman Jake Ortiz-Thornton blasted a shot over the center fielder’s head for a stand-up double. Ortiz-Thornton stole third, then scored on a sacrifice fly by JP Anderson.

Although the final score of 11–1 did not reflect it, Krishan Miller pitched one of the best games of the season. He has worked hard to focus on throwing strikes, and it showed as he gave up only four walks while striking out seven batters. Those seven strikeouts increased his season total to 32, which puts him in fifth place in the conference. Pitching coach Sam Jacobs noted that Miller sped up his delivery and focused on strikes, leading to better velocity and accuracy.

Although the defense was not at its typical level, there were some stellar plays. Junior Noah VanHoose made a running grab in the outfield and fired a bullet to the infield, almost doubling up the runner. Not to be outdone, Eli Eyrich charged a ball hard in center field and threw a laser to Sam Miller who was covering second, to gun down the surprised base runner. Josh Clark added a nice play at third in his only chance of the evening.

This week is the last week of the regular season and may include the makeup games with Middletown Christian and Trotwood-Madison. The sectional tournament is scheduled to start on Monday, May 17, with the Bulldogs traveling to Cedarville for a 5 p.m. start.

The girl’s squad finished in third place behind Division I track power Trotwood Madison. Senior Haneefah Jones performed admirably with a first place finish in the high jump (4´8˝) complemented by a third-place leap in the long jump (15´5˝) and a runner-up performance in the 400 relay with teammates Malaya Booth, Annlyn Foster and Avery Reeder. Sophomore Cheyan Sundell-Turner once again completed a grueling distance double with a first place run in the 3,200 meters (12:19) and a season best time in the 1,600 (5:40) where she finished in second place. Senior Annlyn Foster earned two second-place slots with a season best time in the 100 hurdles (17.6) and the 400-relay effort. She also had a season best toss in the shot put (30´2˝). Junior Malaya Booth ran well in three events, dashing to second place in the 200 meters (28.89) and fifth in the 100 meters (13.74). Avery Reeder ran in both hurdle events where she had a third place effort in the 300 hurdles and a valiant effort in the 100 hurdles and the 400 relay. Team members Devyn Deal, Natalie Galarza, Kayla Ross and Marin Wirrig provided much needed depth to the overall team effort.

The boys had their best team performance of the year finishing in sixth place out of 11 competing teams. Junior Yanne Gilley competed in four events, led by a first place and career best performance in the long jump (19´1˝). He also anchored both sprint relays to scoring efforts: 800 relay (fifth) and 400 relay (sixth). The 400 and 800 relay teams of Liam Hackett, Gilley, Griffin Roberts and Malik Thomas had season best times in both races. Each member of the relay team also had sixth-place scoring efforts in their respective races: Hackett (100 meters), Thomas (200 meters) and Roberts (300 hurdles) demonstrating prowess in the sprints with Thomas adding a fourth place in the long jump (17´4˝). The distance duo of Gideon Naziri and Rilo Oberg added to the team balance scoring in the 1600 meters (eighth) and 3200 meters (fifth), respectively. Hardworking sophomore Sven Meister earned a seventh place in the shot put (31´¼˝). Ninth grader Malik Booth showed marked improvement with season best efforts in the 800 and 1,600 meters.

Coaches Isabelle Dierauer and John Gudgel feel that the recent difficult practices have readied the team for the upcoming Metro Buckeye Conference meet this Saturday, May 15, at Cedarville University, followed by the district meet next Tuesday, May 18, at Northmont High School.