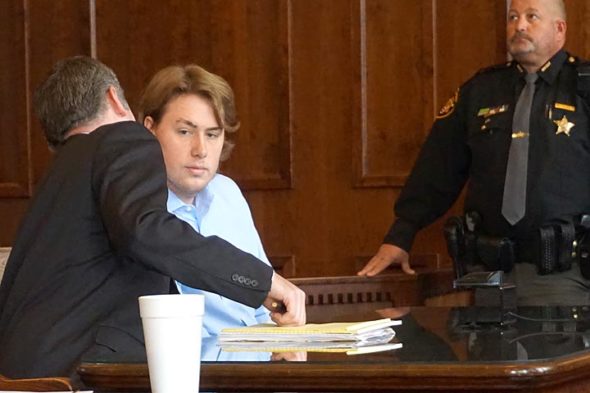 Zyrian Atha-Arnett (center) on Nov. 21, 2019, entered a not guilty plea in Greene County Common Pleas Court to two counts of murder and one count of felonious assault in the stabbing death of Leonid “Lonya” Clark earlier that year. (Photo by Carol Simmons)

The former classmate and friend accused of murder in the 2019 stabbing death of Leonid “Lonya” Clark is scheduled for a plea change hearing on Wednesday, July 21.

Zyrian Atha-Arnett, who pleaded not guilty to the crime at his arraignment in November 2019, has been awaiting trial in the Greene County Jail in Xenia since his arrest on murder charges earlier that month.

Since then, in April this year, 25 counts of child pornography, not related to the Clark case, were added to the state’s charges against Atha-Arnett.

In the case of Clark’s death, Atha-Arnett has been charged with two counts of murder and one count of felonious assault. A sentence of 15 years to life is attached to each of the two murder counts, while sentencing on the assault charge, a second-degree felony, is unspecified. The death penalty is not on the table. The pornography charges, each a fourth-degree felony, typically carry a sentence of six to 18 months, a fine of up to $5,000 or both.

Clark’s father, Eric Clark, who has been following the case’s progress closely and meeting regularly with representatives of the prosecutor’s office, confirmed that his family has been told to expect a change in plea.

Greene County Prosecutor David Hayes and Atha-Arnett’s defense attorney, Jon Paul Rion, each confirmed in separate conversations with the News that a plea agreement is being discussed, but neither would share details or confirm that an agreement is definite.

Atha-Arnett, who attended Yellow Springs Schools through 10th grade and is now 28, has remained in custody on a $900,000 bond.

The murder victim, a 2011 Yellow Springs High School graduate and well-known figure in town, was last reportedly seen Jan. 13, 2019, and officially listed as missing in early February that year. Searches throughout the village and the surrounding parks and nature preserve led nowhere until mushroom hunters found human remains three months later, on April 12, snagged along the Little Miami River in the Glen Helen preserve. The county coroner identified the clothed remains as Clark’s, and determined that his death was caused by stabbing blows carried out by another person.

Atha-Arnett, a resident of Enon for several years before his arrest, became a person of interest during the ensuing murder investigation, conducted by the Greene County Sheriff’s Office and the state’s Bureau of Criminal Investigation, or BCI.

The BCI and members of the Clark County Sheriff’s Office conducted a raid on the Enon apartment Atha-Arnett shared with his father, former Yellow Springs resident Stacy Arnett, on Sept. 20, 2019.

Dates for the murder trial have been set and delayed five times since Atha-Arnett’s arraignment, according to court records. Reasons for the delays included various motions by the defense and the effects of the pandemic on the court’s schedule.

Wednesday’s hearing and sentencing are scheduled in Court of Common Pleas Judge Michael Buckwalter’s courtroom for both the murder and child pornography cases.