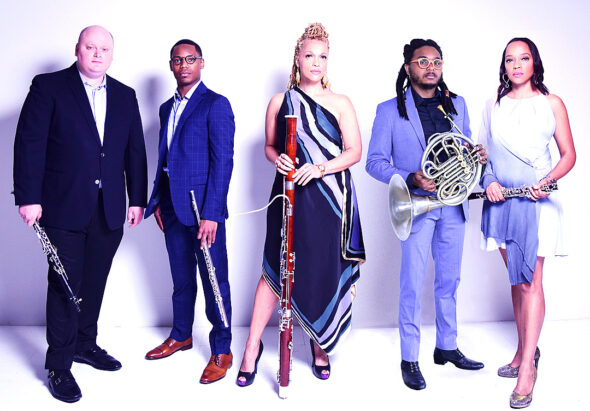 Opening the 2021–2022 season, the Grammy-nominated Imani Winds will perform on Sunday, Sept. 26, at the First Presbyterian church at 4 p.m. This will be their third appearance in Yellow Springs.. (Submitted photo)

The lights dim, highlighting the musicians. As they adjust their instruments, a quiet calm falls over the audience. Almost imperceptibly, the performers glance at each other and nod. They play the first notes, and the concert has begun.

Since 1983, Chamber Music in Yellow Springs, or CMYS, has followed its mission to “enrich the cultural lives of our community” by bringing in a series of professional ensembles each year. Each season consists of four concerts and ends with a competition known for launching the careers of burgeoning instrumentalists. After a year without chamber music concerts due to the COVID-19 pandemic, Karen Gardner, president of the CMYS board, is ecstatic.

“We are going to be able to have quality classical music in Yellow Springs again,” Gardner said in a phone interview.

Opening the 2021–2022 season, the Grammy-nominated Imani Winds will perform on Sunday, Sept. 26, at the First Presbyterian church at 4 p.m. This will be their third appearance in Yellow Springs.

“I’m excited to have them back because they have an eclectic range of music,” Gardner said.

“This year, they’ll start with an arrangement of the national anthem of South Africa. That’s something you don’t often hear at a chamber music concert.”

According to its website, the ensemble “embraces traditional chamber music repertoire, and as a 21st century group, Imani Winds is devoutly committed to expanding the wind quintet repertoire by commissioning music from new voices that reflect historical events and the times in which we currently live.” Along with the South African national anthem, the Imani Winds will also perform pieces by Paquito D’Rivera, a Cuban-American composer, Le Tombeau de Couperin, by Maurice Ravel, and several other pieces.

CMYS will continue its traditional concert series and competition, with some changes that will allow audiences to enjoy chamber music within the constraints of the ongoing pandemic. Gardner explained that there is an appetite for the chamber music series to continue.

“When we decided to come back with live concerts, things were better [with COVID-19]. We called subscribers, and people overwhelmingly said that they wanted to attend concerts,” Gardner explained. “Like everyone else, we are doing the best we can.”

To that effect, audiences will be able to either attend a live concert or watch a livestream of the event. There will be two price points for a single show: $25 for the live event and $15 for 30 days of livestream access. Season tickets will be $80 and $40, respectively. Tickets for the live event will include access to view the concert online for 30 days. Members of the live audience will be required to wear masks, in accordance with CDC recommendations.

Another change to the program will be a question and answer session with the ensemble after the performance. This session will replace the pre-concert talk in previous years given by a local musician.

“I think it’ll be interesting to have the personal aspect about what they like about a piece, what inspired them to play it, how they decided to present the piece,” Gardner said. “The pre-concert talks were more academic; this will be much more interactive.”

These interactive talks are a change that will invite the audience to develop a relationship with the music, something that Gardner hopes will encourage a new, younger generation to come to the performances. The CMYS board and its volunteers have also tried to make the concerts financially accessible to young people.

“Thanks to our board and donors, we are able to allow people 25 and under to come for free, which is just amazing,” Gardner said. “We are proud to bring in groups that perform in places like New York and Washington, D.C., at low to no cost for our audience.”

Another important part of CMYS’ mission is its educational and outreach program. Usually, after one of the Sunday concerts, an ensemble performs for Mills Lawn students during the following school day.

“It’s all about exposure,” Gardner said. “When I was a kid, my mom took me to a chamber music concert which included a clarinetist. I loved it and asked to play the clarinet.”

Due to the ongoing pandemic, the Imani Winds, which had been scheduled to play at Mills Lawn, will instead perform on Monday, Sept. 27, at Central State University.

“We are so excited that they will do an outreach at Central State by performing and teaching a master class to a saxophone student,” Gardner said.

Two string ensembles, the Telegraph Quartet and Shanghai Quartet will play subsequent concerts on Nov. 21 and March 27. Following the three concerts will be the annual chamber music competition, when two ensembles chosen as finalists will perform. The average age of the group must be 30 years old or younger, and no individual member can be over 35. This year, competitors will be evaluated by judges, but there will also be an “audience favorite” category that is new to the competition.

According to the CMYS website, the purpose of the competition is to “promote young, emerging professional chamber music ensembles.” Many of the finalist ensembles are currently active performers around the world. Asked about promotion for the event, Gardner explained that community members and volunteers, such as Jane Baker, are instrumental to organizing CMYS events.

“We are so thankful for Jane’s work on all the graphic design for many years,” Gardner said.

As for the upcoming concert series, CMYS and its volunteers are ready to continue sharing chamber music with a live audience, and, in Gardner’s words:

“Enjoying the sounds, picking up melodies and appreciating the textures of music coming together.”