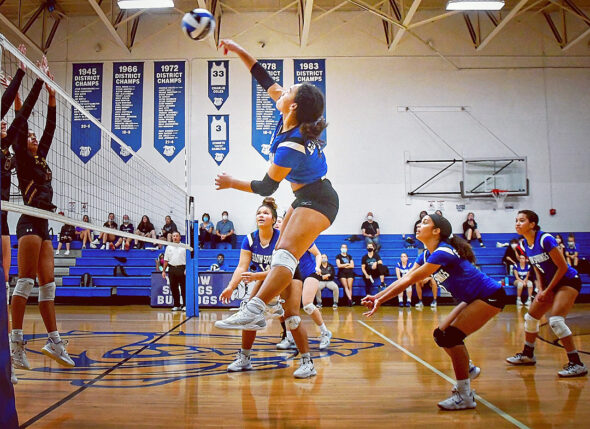 Aaliyah Longshaw returns the ball during a conference game against Southeastern Local; the Bulldogs lost 0–3. But the team is in second place in league play with a conference record of 6–2; overall record for the season was 14–5 heading into this week. (Photo by Michael Kneymeyer)

The Bulldogs bested the Dayton Christian Warriors by a score of 4–2. Both teams went into the contest with conference records of 3–0–0.

“Our boys really played well,” VanAusdal said this week. “Our defense did really well. They stayed on one of their best players,” limiting his ability to score.

The coach said the game, which was also Homecoming for the school, was exciting, with Dayton Christian up 2–1 for a time.

“But our guys prevailed,” he added.

Scoring were Eli Eyrich, with two goals, and Isaac Grushon and D’Andre Cowens, with one goal each. Grushon also had two assists, and Alex VanAusdal and Henry Smith-Heston each had one assist. Goalkeeper Krishan Miller logged nine saves.

In nonconference play, the team went up against Jackson Center on Saturday, Sept. 28, and Newton Local on Thursday, Oct. 7. Both games were shutouts, with scores of 3–0 and 8–0, respectively, in the Bulldogs’ favor. The season’s final game, scheduled Monday, Oct. 11, against New Hope Christian Academy, was canceled by New Hope. VanAusdal said that unless another game could be scheduled this week, regular season play has ended.

Without another game, the team’s season record going into statewide tournament play is 14–0–0. Tournament seeds were announced earlier this week, with Yellow Springs seeded at No. 1 among 25 area teams. The first round will see the Bulldogs face Madison Middleton on Tuesday, Oct. 19, on the Yellow Springs High School field.

“It was a fantastic year,” VanAusdal said of the regular season, adding that with only two seniors on either team, most players likely will be returning next fall.
—Carol Simmons

Bulldogs press ahead
Playing five matches in seven days, the Bulldogs won three and lost two last week. The wins were all against conference rivals, while the losses were against nonconference teams.

On Monday, Oct. 4, the team lost 0–3 against Southeastern Local, following up with a 3–0 win the next evening against Middletown Christian. A 3–2 loss to Carroll High School on Wednesday, Oct. 6, was followed by a 3–1 win the next evening against Emmanuel Christian Academy. Another match against Middletown Christian on Saturday, Oct. 9, ended 3–0 in favor of the Bulldogs.

The team is in second place in league play with a conference record of 6–2. Overall record for the season, with three matches left on the regular season’s roster, was 14–5 at the beginning of the new week.
—Compiled from MaxPreps

Bulldogs run the Ambassador Classic
Despite missing several runners due to injury, the Bulldogs performed well Saturday, Oct. 2, at the Ambassador Classic held on the grounds of the Legacy Christian Academy campus in Xenia. This course each year proves to be the toughest course that the Bulldog runners compete on with its rolling hills, creek crossings, deep woods and sharp turns.

Junior Cheyan Sundell-Turner continued her fine season with a first-place finish in a time of 21:12, besting 60 other runners. Junior Josie DeWine stepped up big time with a time of 27:52, which placed her in 20th place, while ninth-grader Lydia Lackovich-Van Gorp, in her inaugural season, ran to a 27th-place finish.

The high school boys finished ninth out of 16 teams, with Jia Sundell-Turner leading the charge in a time of 22:02, which placed him 23rd. Jack Horvath ran a strong race in 22:58 (30th), with fellow sophomore Kyle Raymer running a personal best time of 26:27 (63rd) followed closely by Malik Booth at 26:27 (64th). Rounding out the scoring were Malcolm Blunt (81st) and Evan Galarza (82nd).

The McKinney Middle School boys team duplicated the high school boys by also finishing ninth out of 16 teams in a field of 95 runners. Five seventh-grade runners showed maturity and aplomb, with Will Oberg running a time of 15:49 (57th) and Oskar Dennis completing the course in a time of 17:04 (69th). Charlie Carr (86th), Jaden Douglass (94th) and Donovan Cooney (95th) completed the scoring for the young Bulldogs.

Coach Isabelle Dierauer said that the practices leading up to the meet on Saturday were the most grueling of the year, but would prepare the team for the season-ending meets.

The Bulldogs will run in the Metro Buckeye Conference at Cedarville University on Friday, Oct. 14, beginning at 4:30 p.m., followed by the annual home meet at Young’s Jersey Dairy on Tuesday, Oct. 18, also at 4:30 p.m.
—John Gudgel, assistant coach