A virtual Town Hall meeting with the Village of Yellow Springs and the Oberer Development Team, to be held Wednesday, Jan. 12, at 7 pm, is open to the public and will stream live on YouTube, Facebook, and Channel 5.
Visit the Village of Yellow Springs’ website to learn more about the Town Hall meeting: https://www.yso.com/egov/apps/events/calendar.egov?view=detail;id=960

Around 30 people attended a Village Council work session with representatives from Oberer Developers Greg Smith and George Oberer Jr. on Monday, Jan. 10. The purpose of the meeting was for Village Council members to ask questions about the proposed development to inform their future decision on whether to rezone the 52 acres slated for development as a planned unit development, or PUD.

After the Dec. 6 Village Council meeting, during which the zoning was discussed, Council members requested more information from Oberer, including an expanded traffic study, a rendering of the development under Residential-A zoning, and a breakdown of the value of Oberer’s proposed donations, which included land for affordable housing, land for a park, and playground equipment.

“It’s a little too early to tell,” Oberer said, citing rising construction costs. “I suspect it’ll be on the upper side of that.”

Council member Marianne MacQueen asked about modifications to the blueprints of homes.

“Can people build smaller?” she asked.

Smith and Oberer explained that potential buyers are able to change the layout of the homes to fit their needs. In a follow-up interview, Oberer elaborated by saying that if a customer wanted fewer square feet, they would present them with different options. 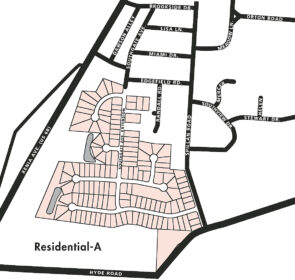 The Residential-A rendering includes only single-family homes. (Click to enlarge)

Council member Lisa Kreeger asked about the possibility of market-value apartments, saying that she would like to know why they were not considered for this development.

“I appreciate that the Village will have the opportunity to do something with donated land, but I expect that those will be low-income apartments or a pocket neighborhood,” she said. “In my wish list there would be a rental apartment building. I believe that’s what we need the most.”

In response, Smith said that most developers build luxury apartments. In order to make money, developers who build market-rate apartments usually start with 150 units that rent for $1,200 per month for a one-bedroom unit.

Smith said that the updated traffic study, which was expanded to include the intersection of East Hyde Road and U.S. 68, was done to address concerns from residents whose properties are near the proposed development. Oberer said that sidewalks and street parking would reduce traffic speed within the development, but there was little that the developers could do to reduce the traffic speed on Spillan. 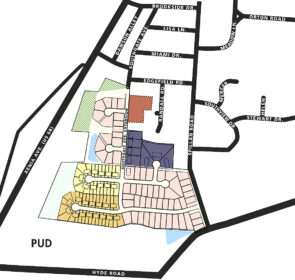 Smith noted that there are 1,500 jobs within a one-mile radius of the proposed development, and that the development’s connection to streets and bike paths would increase walkability. He also addressed suggestions about constructing a road that would connect the development with U.S. 68.

“We do not own the property, and it is not part of the village,” he said. “Most notably, the creation of a road would increase traffic by creating a cut-through that is not currently existing.”

Oberer added that creating a road to U.S. 68 would require a permit and a bridge to cross the existing creek. Oberer also said that the Ohio Department of Transportation may require an additional lane be added that would allow for acceleration and deceleration when crossing the state route.

Oberer representatives also addressed questions regarding the homeowners association, or HOA, they plan to establish during the build-out of the development.

Council member Lisa Kreeger said that she questioned the need for the HOA.

“I really don’t think that is consistent with Yellow Springs,” she said.

According to Zoning Administrator Denise Swinger, there are several HOAs within Yellow Springs neighborhoods, including Thistle Creek, Park Meadows and Littlewood. Other neighborhoods, such as Omar Circle and Birch 3, have various restrictions written into their subdivision plans.

In response to a question from MacQueen, Smith said that Oberer is committed to discussing the terms of the HOA with members of Village staff, or their representatives, to align the HOA with Village aesthetics.

“We are happy to require native landscaping in the HOA,” Smith said.

If the Village does not move forward with the PUD, however, “we will do the HOA as we deem appropriate,” Smith continued.

In a follow-up interview, Oberer explained that the HOA was necessary to maintain stormwater and other common areas in developments. Oberer said that many development companies started HOAs in response to stormwater treatment and other environmental requirements enacted by the Environmental Protection Agency in the ’70s.

“There almost has to be one,” he said.

In a follow-up interview, Swinger said that an HOA ensures the detention ponds and wetland area will be maintained, which benefits the Village.

“We have a small public works crew and they have a lot of areas that they have to maintain, so we didn’t want to add those areas to their load,” she said.

Oberer also said that the HOA for the proposed PUD would ensure continued maintenance on shared spaces, such as roofs on the duplexes and townhomes.

“Those are foundational association issues that we really don’t have much flexibility in,” Oberer continued.

In terms of an HOA under Residential-A zoning, Oberer said that the development company would have an HOA, but that it would contain fewer guidelines.

“There are fewer issues to be dealt with,” he said.

In a response to a question from the News, Oberer said that the company may be willing to collaborate with the Village on a single-family home HOA, “to a lesser extent.”

Council member MacQueen asked if the HOA would prohibit accessory dwelling units or other additional structures on properties. Oberer said he believed that the HOA and PUD would make it easier for homeowners to add accessory units.

In a follow-up interview, Swinger explained that building restrictions would be written into either the subdivision plat or the PUD.

“If it’s not restricted in the beginning, then we can make it happen,” she said.

Council members will consider the options presented at the work session and hear a first reading of an ordinance to rezone the development on Tuesday, Jan. 18. A virtual town hall meeting was slated for Wednesday, Jan. 12, and will be covered in a future edition of the News.