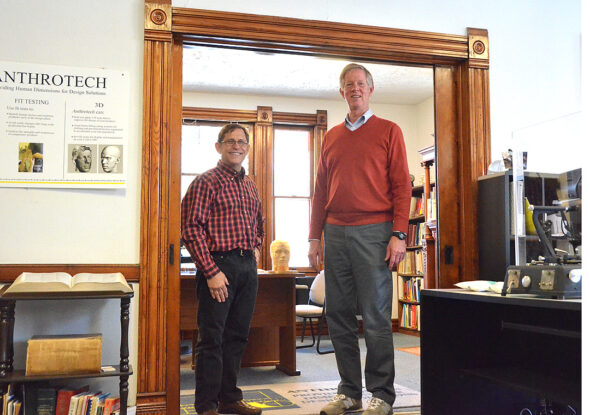 Oscar Meyer, left, is the new owner and president of Anthrotech, having purchased the business from its previous president and co-owner, Bruce Bradtmiller, right. Anthrotech specializes in anthropometric research, which focuses on the study of human body size and dimension. (Photo by Lauren "Chuck" Shows)

One of Yellow Springs’ oldest businesses, 72-year-old Anthrotech, is now under new ownership.

The business, which focuses on research and consulting around anthropometry — the study of the dimensions of the human body — changed hands in January of 2021.

Previous owners and villagers Bruce Bradtmiller and Carol Cottom, who are married, sold the Xenia Avenue business to Loveland resident Oscar Meyer. Originally from South Africa, Meyer came to the U.S. in 1992 and previously worked for Johnson & Johnson in Cincinnati, and will serve as both Anthrotech’s owner and its president.

Since the sale of the business, Bradtmiller, who was previously its president, has remained with Anthrotech to aid in Meyer’s transition as head of the company. He will continue to gradually phase out his involvement through the end of 2023.

Meyer told the News in a recent interview that his background in healthcare products and business development made him interested in Anthrotech’s unique work.

“I was made aware that the business was for sale in 2019, and for me it was almost an immediate connection,” he said. “It’s a jewel that very few people know about, but [Bradtmiller] has built a loyal customer base, and it’s a unique, much-needed service.”

Among the specialized services that Anthrotech offers are conducting surveys of body sizes; product testing; research and testing around sizing, grading, workspaces and accessibility; and providing expert testimony in court cases that involve product design.

Bradtmiller said he and Cottom sold the business in order to retire, and that Meyer’s understanding of Anthrotech’s value was part of the reason they chose Meyer to helm the business. He added that Meyer’s desire to keep the operation local and moving forward was also a major consideration.

“That’s important to us — we didn’t want to sell it and have somebody pack it up in a box and move it somewhere else,” Bradtmiller said.

Cottom and Bradtmiller have owned the business since 1992, when they bought it from John and Mildred McConville. It was Anthrotech that brought the couple to town in 1983: Bradtmiller, who holds bachelor’s, master’s and doctoral degrees in anthropology, had been conducting research in the field of paleopathology — the study of ancient diseases — at the University of Tennessee when he first heard about the work of Anthrotech.

“I hadn’t really done any anthropometry before I came here, but I didn’t find any jobs in [the paleopathology field] — but this job was open,” Bradtmiller said. “I had a lot of anatomy training — and the McCon­villes evidently thought I was trainable.”

Anthrotech, originally called Anthropology Research Project, began as a collaboration between Antioch College and Wright-Patterson Air Force Base under the direction of Antioch professor and researcher Edmund Churchill. The business eventually separated from the college and became a consultant to the U.S. Air Force and NASA. In 1977, under the direction of the McConvilles, it became independent.

Throughout these years, the company’s work was mostly military- and government-based, providing measurements of human bodies to those entities to be used in crafting everything from uniforms to protective gear to workspaces. Bradtmiller said this period of the company’s history accounted for some of its most groundbreaking work — particularly as women began to enter the military in broadened roles.

“All of a sudden, women had to wear flight suits and various protective equipment,” he said.

“Initially what the military was doing was simply making [uniforms and equipment] in a smaller size. We did a lot of work early on to show that, no, women are not actually just small men — it seems obvious, but at the time, that was the mindset, so we did a lot with proportional differences.”

By the 1990s, the company had begun to transition away from working primarily with the government and the military, expanding into private sector contracts within the information technology industry — a shift that was signaled by the change of its name from Anthropology Research Project to Anthrotech.

“Now we’re doing most of our work for the IT industry because all of the big IT companies are making things that fit on the head and the eyes and the ears, things that have to interact with the hand,” Bradtmiller said, referring to the modern trend toward common use of technology like smartphones, headphones, earbuds and headsets.

When asked which IT companies are or have been contracted with Anthrotech, Meyer politely demurred, citing the company’s ongoing confidentiality agreement with its clients, but added: “The way that I like to describe it is that Anthrotech services at least five of the top 15 companies in this country.”

Meyer explained that another area in which Anthrotech has made strides over the years is in the way it collects data. Up until the last decade, he said, the tools of anthropometry were analog and manual: tape measure, calipers and anthropometer, a tool of the trade that consists of a long steel rod and two horizontal arms, one of which is adjustable. While these tools are still used, in recent years Anthrotech has shifted to collecting data via 3D scans — a particular blessing as the company continued its work during the global pandemic.

“If you think about COVID, it’s one of the fortuitous changes that happened in Anthrotech — we couldn’t get face to face, but someone could give us a 3D scan,” he said.

Meyer added that, as Anthrotech has worked with the Centers for Disease Control and Prevention, the company’s research has impacted the response to the pandemic itself.

“Considering all the things that we are wearing, particularly within the last 18 months — masks and respirators — understanding faces and heads is becoming far more of an important part of the work,” he said.

Looking ahead, Meyer said he aims to expand Anthrotech into research and consulting in other areas — including medical devices, which are part of his own professional bailiwick. He said he’d also like to expand the scope of anthropometric research to include a more diverse range of human bodies.

“I’m really passionate about us developing deep expertise and skills around the anthropometry of women of color and women of different ethnicities,” he said. “If one looks around the U.S. and the rest of the world, women have gotten short shrift and we need to do more about that.”

Noting the height difference — about a foot or so — between himself and Bradtmiller as a sort of object lesson, Meyer pointed out that the continued variation in human bodies means Anthrotech will always have more work to do.

“There’s been the question, ‘Haven’t you taken every measurement that can be taken?’ And the answer is ‘no’ — not in every situation,” he said.

Anthrotech’s research is often conducted within its Xenia Avenue office, the edifice of which resembles a typical village home more than a space for collecting data; many a Yellow Springer has entered the blue building over the years to offer their own bodily dimensions to the company’s ongoing research. Despite these hyperlocal ties, Meyer said Anthrotech’s work has had a far-reaching impact.

“Anthrotech has participated in some groundbreaking data collection efforts around anthropometry, so in some ways the Anthrotech thumbprint is on just about every conversation that has been held around human dimensions since those studies were done,” he said. “Those studies are still on the shelf for people to use as they’re doing analysis.”

Meyer noted that many of the things people use in their day-to-day lives — from clothes to handheld devices to furniture — have had their designs influenced by anthropometric study.

“What we do touches just about every part of a person’s life without them ever knowing — and we’re yet another one of these local businesses that grew out of Antioch,” he said. “We feel proud to be in that galaxy.”