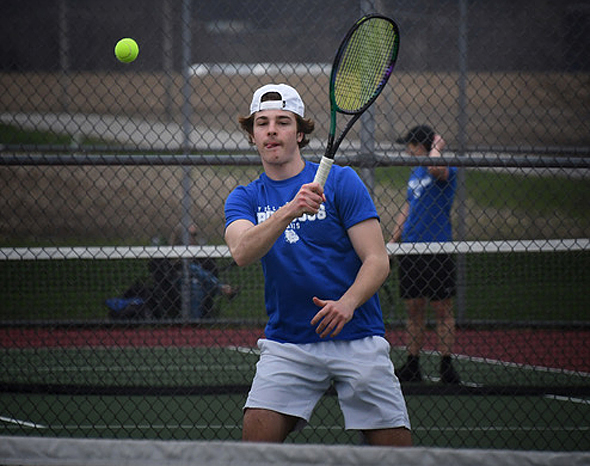 Junior Ethan Knemeyer was captured mid-swing during a Yellow Springs High School tennis game Tuesday, April 12, against Northeastern. The Bulldogs swept the match 5–0. Details of the match will be covered in a future installment of Bulldog Roundup. (Photo by Michael Knemeyer)

Twenty Yellow Springs High School track and field athletes traveled to Springfield on Thursday, April 7, for their first meet of the season, with 12 competing in their first ever high school track competition. Despite blustery, cold and rainy conditions, the Bulldogs showed great effort. The boys squad finished in ninth place, out of 13 teams, while the girls team had a solid fifth-place finish out of 12 schools. Springfield Shawnee High School hosted the annual event.

The other scoring efforts came from new competitor Kyle Raymer, who ran to fifth place in the 300-meter hurdles; Jack Horvath, who finished sixth in the 3,200 meter race; and Sven Meister, who tossed the shot put to an eighth place finish. Evan Galarza, Ben McKee and Jia Sundell-Turner performed admirably as well.

Coaches Isabelle Dierauer and John Gudgel commented that this meet was a great starting point and that potential abounds for both squads. The Bulldogs will compete Friday, April 15, at the 15-team Graham Invitational.
—John Gudgel, coach

First up, on Tuesday, April 5, the rains were light enough to allow the team to travel to Botkins Community Park to meet Botkins High School.

Sophomore Isaac Grushon took to the soggy and slick mound against the Trojans and pitched well in his first outing of the young season. Unfortunately, his defense kept him from getting out of the first inning without any trouble, so the Bulldogs found themselves down early. However, strong hitting kept the team alive until darkness fell, and the game was called with sophomore Brady Baker standing in the batter’s box hoping for just one more pitch.

Hitting coach Phil Renfro saw his lumber men smack a total of 11 hits in just under four full opportunities. Sophomores Jake Ortiz-Thornton and Grushon, as well as junior Josh Clark, had two knocks apiece. Juniors Shawn VanHoose, Krishan Miller and Eli Eyrich each had a hit, with Eyrich adding a hit-by-pitch and a stolen base to his credit. Seniors Yanne Gilley and DeAndre Cowen each got into the swing of things in a big way. Gilley had a beautiful line drive triple to right field to clear the bases and earn three RBIs. Cowen had his second 4-RBI game this year, with a walk, hit-by-pitch, and an outfield-clearing double.

Clark and sophomore Sam Miller came in to relieve Grushon, but the Trojan bats, a rain-soaked ball and a tight strike zone were too much to overcome as the score ended at 24–13.

Thursday, April 7, saw the Bulldogs travel to Springfield to play Catholic Central. Ortiz-Thornton and Krishan Miller each had impressive stints on the mound. The hurlers scattered only eight hits, while holding the strong Fighting Irish club to 11 runs.

This year’s strong hitting continued for the Bulldogs, although the results did not show it. The Irish defense kept several solid hits from reaching the ground and erased some good opportunities to score. Grushon had two hits, while Ortiz-Thornton and VanHoose each added one of their own.

All but one Bulldog batter made solid contact at the plate.

The Bulldogs were in the game, down 6–1 with runners in scoring position, through the fourth inning. The Irish put the game away in the fifth inning, however, posting an 11–1 victory.

“The scoreboard doesn’t show it, but we were in this game the whole night and kept fighting,” coach Mitch Clark said. “We have the hitting this year to give ourselves a chance against the better teams, whereas in years past we didn’t. This team is going to be fun to watch!”

See the sports schedule for multiple opportunities to support your team in the coming week, including three home games.
—Mitch Clark, coach

The Yellow Springs High School girls fast-pitch softball team opened their season on the road against Dayton’s Stivers by jumping out to an early lead, but it wasn’t enough, as they lost by a final score of 20-10 in the out-of-conference contest.

Hitting coach Shannon Cox was pleased with the Bulldogs’ performance.

“Our team outhit Stivers, so I’m pleased with the progress,” she said after the game. “We’re going to score a lot of runs this year.”

Stivers was the beneficiary of walks by the Bulldog pitchers, who appeared nervous in their first outing of the year. Pitching coach Jesi Worsham said she anticipates improvement with more playing time.

“Overall, our pitchers threw well,” she said. “They just need some more experience on the mound to work on their control, and they will get that as the season progresses.”

Senior Carina Basora and juniors Halee Sparks and Adeline Zinger led the way on offense. Zinger and Basora both had two RBI’s, and Sparks had two hits, two stolen bases, two runs scored and an RBI.

On Thursday, April 7, the Bulldogs played another non conference away game, going up against Catholic Central in Springfield. The Bulldogs jumped out to an early lead, but Central came back to defeat them by a score of 19-6.

Sophomore Violet Babb started on the pitcher’s mound and held Central to three earned runs over three innings. Pitching coach Worsham was complimentary of her effort.

“Babb was throwing a lot harder today, and her control was much better,” Worsham said. “She’s becoming a very effective pitcher.”

Once again the Bulldogs outhit their opponents. Babb and Basora were the hitting stars as Basora crushed an inside-the-park homerun on her way to two hits, a walk, two runs scored, and two RBIs for the game. Babb sent a rocket to the right field fence for a triple as she had two hits and two RBIs. Halee Sparks also continued her hot hitting, getting on base twice with a hit and a walk, scoring 2 runs and securing one RBI.

The Bulldogs also played stellar defense as they made several outstanding plays. Right fielder Chloe Bayard made the play of the day when she tracked down a deep “moonshot” drive to right center field to make the catch to end the inning and save a run. Babb and Basora also made outstanding plays as Babb picked off a screamer line drive back to the mound, and Basora robbed a Central hitter of a base hit when she streaked behind the pitching mound to grab a soft line drive hit over the mound.

The 2022 tennis season is underway, but weather has been a factor in getting in the scheduled matches. As of early this week, the team was 2–2, having faced formidable opponents as well as a surprise attack from Legacy Christian.

The second team win came at the expense of Waynesville. Last year the Bulldogs won in a tough 3–2 battle. But with talent and growing experience, this year the team beat them 4–1. Henry Smith-Heston, Jason Knemeyer and Ethan Knemeyer won their singles matches, and the Liam McClean/Luka Sage-Frabota pairing won their doubles court.

The squad ran into trouble against Legacy Christian, which has rebuilt its team with new recruits, including the 180 nationally ranked freshman Tucker Culpepper, setting the tone for the upset.

Although the Bulldogs lost, 3–2, they had their chances with four match points on their racquets. Next time YS faces Legacy, the team will take a different approach in an attempt to secure the win. Winning their courts for YS were Ethan and Jason Knemeyer at #1 doubles and Liam McClean and Luka Sage-Frabota at #2 doubles.

The other loss came against rival Dayton Christian, 3–2. This match was highly contested and could have gone either way. Veteran players Jason Knemeyer and Ethan Knemeyer secured the only wins in the match, playing #2 and #3 singles, respectively.

The team has a lot of talent and is relatively young. Over the next three weeks the players will attempt to play fourteen matches, if the weather cooperates. This is physically taxing, but the athletes will dig deep and win more, showing what they are capable of, with captains Henry Smith-Heston and Jason Knemeyer leading the way.
—Stacey Knemeyer, coach