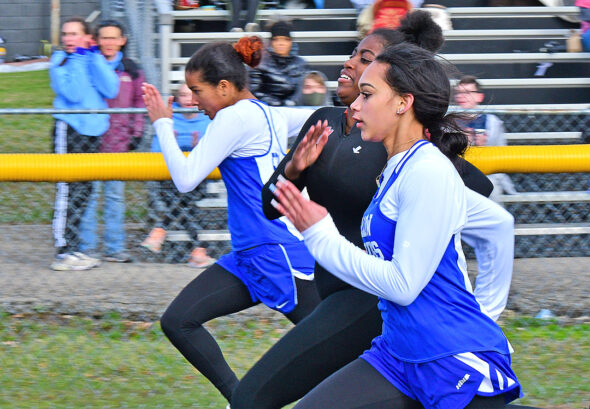 YSHS track runners Asha Jackson, left, and Ela McGree, foreground right, ran at the Seitz Invitational Meet, hosted by Shawnee High School in Springfield on April 7. Although the weather was blustery, the girls finished a solid fifth place out of 12 competing schools. (Photo by Kathleen Galarza)

The Yellow Springs High School boys and girls track teams competed Friday, April 15, at the ultra-competitive 45th annual Graham High School Invitational. Strong performances by the Bulldogs were the norm in this 15-team event. Both the boys and girls Division III squads finished in tenth place among the mainly Division I and Division II teams.

On the boys side, senior DeAndre Cowen showed a wealth of talent in the high jump, competing in the event for the first time and achieving the rare feat of winning it with a leap of 6’0. Junior Malcom Blunt continued his early season dominance, earning third-place bronze medals in the long jump and the 200-meter race. Yanne Gilley returned to the track and finished with a fourth place in the long jump and seventh place in the 200 meters.

Coaches Isabelle Dierauer and John Gudgel commented on the athletes’ marked improvement from the previous meet along with the effort that was put forth by the entire team. The Bulldogs are next scheduled to compete at the annual Greene County Invitational, which will be held at Greeneview High School on Thursday, April 21.
—John Gudgel, coach

The fans who made it out to Gaunt Park on Tuesday, April 12, were disappointed to find nothing more than puddles, as the hometown team had to make last-minute arrangements to go on the road for their first Metro Buckeye Conference game of the year.

The powerhouse Dayton Christian Warriors were kind enough to get their field ready and host the Bulldogs. Although the field was soggy and muddy in spots, the Bulldogs were happy to be able to play.

The hitting was enjoyable to watch, as several of the Bulldogs wore their hitting shoes. Josh Clark, a junior, led the way with three hits and three RBIs, while juniors Isaac Grushon and Shawn “Scoops” VanHoose and sophomore Sam Miller each connected with a hit of their own. Although freshman Hazen VanMeter did not record a hit, his two walks were impressive, as he worked the count and fouled off several tough pitches. The Bulldogs jammed the bases in each of the first four innings, but only managed to plate four against the stingy Warrior defense.

Clark had a strong outing on the mound as he scattered 10 hits and allowed only three walks over his three and two-thirds inning stint. Grushon was impressive as he managed to keep the big bats of Dayton Christian to only two hits and a walk over his one and a third innings.

“We have refined our strategy, which has led to our pitchers significantly reducing walks and throwing an average of 23 pitches per inning, down from 45 in earlier games,” pitching coach Sam Jacobs said.

The downside of the new strategy of putting the ball in play is that it puts a lot more pressure on the defense.

“The increased opportunities will provide much needed experience and help our already good defense improve over the season,” head coach Mitch Cark said. “We did have a couple of miscues, but there were some fluke plays out there that made it look worse than it was.”

The Bulldogs fought until the end, but were eventually beaten 18–4 by the Warriors, who remain undefeated in the conference.

The rematch against the Warriors on Thursday, April 14, was also played at the Dayton Christian field. The host team was not nearly as hospitable as they were in the first game. Sore arms for the Bulldog pitchers, coupled with the absence of some key players and excellent pitching by the Warriors led to a very lopsided 32–0 victory by Dayton Christian. Hitting coach Phil Renfro was not deterred, choosing to look at it as an opportunity for the young squad to continue to grow.

A full slate of games is upcoming for the hometown team, who would love to have as many fans as possible support them as they continue their season.
—Mitch Clark, head coach

This year has provided the worst weather for spring tennis in memory. It’s hard for the team to hit its stride when there are so many disruptions. Matches canceled and rescheduled, indoor practice — none of this is conducive to player development.

Since last week, the Bulldogs have played three matches, with two wins and one very close loss.

The team had a tough match, however, playing conference foe Dayton Christian on their windy home courts, losing 2–3. Ethan Knemeyer and Jason Knemeyer were able to pull out wins in their singles matches. Next year’s goal is to sweep conference rivals.

The mighty Bulldogs ended the week with an epic match versus the Fairborn Skyhawks, winning in dramatic fashion, 3–2. Each court was highly contested and could have gone either way. Ethan Knemeyer in singles and the doubles duo of Liam McClean and Luka Sage-Frabotta each had straightforward matches.

The decider came on the first doubles court with Onfroy-Curley and Scavone pulling out a three set, back and forth match, securing the Bulldog team win. The boys were clutch under pressure, not backing down from competition. They fought hard, showing courage and commitment to the very end.
­—Stacey Knemeyer, coach