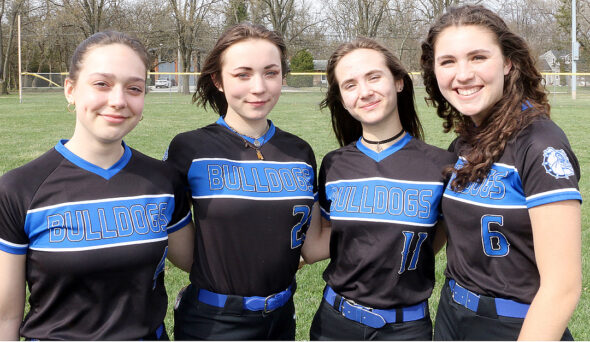 There is room for optimism for the 2022 edition of the Yellow Springs High School varsity softball team as the Bulldogs return seven starters from last year’s squad, including an all-senior infield, with Ava Schell at first base, Carina Basora at second, Sophia Lawson covering third and Lily Rainey at shortstop.

The Metro Buckeye Conference, or MBC, is going to be very balanced this year; any team can win it, and Yellow Springs has a good chance to grab first place. Last year, the Bulldogs beat Dayton Christian for the first time in five years, and that victory enabled Yellow Springs to have the best record in league play. That possibility holds true again this year, as the team boasts the most experienced group of players in over a decade.

While all of the seniors can hit, run and field, Rainey has the most accurate arm I’ve ever coached at shortstop. Basora covers a lot of ground at second, and her .556 batting average was second in the league last year. Schell plays a critical role at first with a quickness that enables her to catch anything thrown her way — a gold-glove-caliber player who in past seasons saved many runs with her ability to scoop errant throws.

The offense is also expected to be one of the team’s strengths this year. Senior leadoff hitter Lawson led the team last year in runs scored. She also led the MBC in stolen bases, with 24, while achieving a .515 batting average. Lawson can fly on the bases — her pure speed makes her a threat to score every time she gets on base.

Sophomore Violet Babb will also play second base for the team. Babb was one of the leading hitters for the Bulldogs last year, with a .472 batting average, and also was in the top five on the team in runs scored and runs batted in.

As always, pitching will play a major role in deciding the team’s fate. Babb and junior Halee Sparks will get the bulk of the innings this year. Both have been taking pitching lessons in the off-season. They’ve worked hard, and both throw much harder than a year ago, when they each had their first varsity experiences on the mound.

Catching will be handled by sophomores Joslyn Herring and Ella Laws. Herring plays travel ball and knows the game well. She’s also a solid offensive player, hitting .452 last year. Laws is new to catching, but pre-season scrimmage play showed that she has quick reflexes and can handle herself like a veteran behind the plate.

The rest of the roster consists of five first-year players in Josephine Zinger, Adeline Zinger, Chloe Bayard, Kaylee Cruz and Vivian Bryan. All these players have worked hard in practice and have done well in our scrimmages.

Bulldog captains for this year are seniors Lawson and Rainey, junior Sparks, and sophomore Babb.

I’m looking forward to the season regardless of the outcome. The senior class has been a joy to coach these past four years. They are very athletic and more importantly, their sportsmanship and leadership and attitude on the field are outstanding. It’s been a good group to coach, and their character and influence has carried over to the younger players, which makes my coaching job much easier.
—Jim DeLong, coach

The Yellow Springs High School varsity boys baseball team opened the 2022 season with a three-inning shutout against Dunbar High School’s Wolverines on Friday, April 1. The away game ended with 20 runs for the Bulldogs.

Junior Jake Ortiz-Thornton was tapped by pitching coach Sam Jacobs to take the mound and held the Wolverines to a single hit, throwing eight strikeouts in Dunbar’s three times at bat.

“We needed to make sure our pitcher threw strikes to pressure the other team and to take advantage of our much-improved defense,” Jacobs said.

Ortiz-Thornton delivered exactly what was ordered, keeping the hitters off-balance with a mix of fastballs and well-timed curveballs.

Hitting Coach Phil Renfro was pleased with the balance of patience and aggressiveness that his young hitters showed against the inconsistent Wolverine pitchers. Their patience at the plate, coupled with some well-timed hits and great baserunning, culminated in the shortened contest with a 20–0 final score.

Junior Krishan Miller and sophomore Sam Miller each had a key hit. Senior DeAndre Cowen delivered an extra-base blast that added to his four-RBI night. Several players garnered multiple walks and ran wild on the basepaths until third-base coach Bryan Rogusky put up the “stop” sign in an effort to maintain good sportsmanship. The at-bat of the night did not look like much on the scoresheet, but was appreciated by all in attendance, especially the coaches.

Senior Yanne Gilley, in the first game of his career, worked the count and fought off pitch after pitch until finally earning a walk.

“That was a fantastic effort by Yanne as he did exactly what we have been teaching, to fight off pitches until you get the one you know you can drive or the pitcher gives in,” Coach Renfro said.

Second-year head coach Mitch Clark was thrilled to have a win on the board for his young squad, but was most pleased with the class they exhibited in winning. This week’s schedule has the Bulldogs on the road to power houses Botkins and Catholic Central before returning home to Gaunt Park at 5 p.m. on Friday, April 8, to complete the other end of the series with Dunbar.
—Mitch Clark, coach