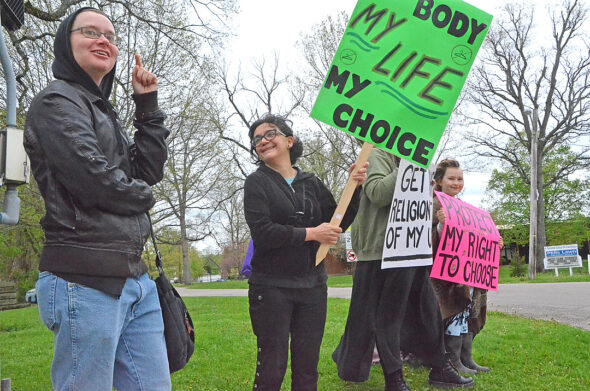 About 30 villagers gathered around the intersection of Xenia Avenue and Limestone Street on Saturday, May 7, to protest a leaked Supreme Court draft decision. The decision, if adopted, would overturn the 1973 Roe v. Wade case, which made abortion legal in the U.S. (Photo by Matt Minde)

About 30 people gathered at the corner of Limestone Street and Xenia Avenue on Saturday, May 7; the reason — abortion rights. Organized by villagers Zoë Hayes and Lindsay Burke, the rally was one of many demonstrations across the country in response to a leaked draft of a Supreme Court opinion that would overturn Roe v. Wade, the Supreme Court case that legalized abortion nationwide.

News outlet Politico released the leaked document on Monday, May 2. A majority of Supreme Court justices supported the draft opinion, penned by Justice Samuel Alito, in the case of Jackson v. Mississippi, saying that the right to restrict abortion access should lie with individual states, and that Roe v. Wade and Casey v. Pennsylvania, two landmark abortion rights cases, should be overturned.

While Roe was the case that legalized abortion in the United States, Casey, decided in 1992, reaffirmed the power of Roe, saying, in part:

“The ability of women to participate equally in the economic and social life of the Nation has been facilitated by their ability to control their reproductive lives. The Constitution serves human values, and while the effect of reliance on Roe cannot be exactly measured, neither can the certain costs of overruling Roe for people who have ordered their thinking and living around that case be dismissed.”

According to the draft opinion, the Court must consider the definition of “liberty” when interpreting the dictates of the 14th amendment. The draft reads, in part:

“Guided by the history and tradition that map the essential components of our Nation’s contempt of ordered liberty, we must ask what the 14th amendment means by the term ‘liberty.’ When we engage in the inquiry in the present case, the clear answer is that the 14th amendment does not protect the right to an abortion.” 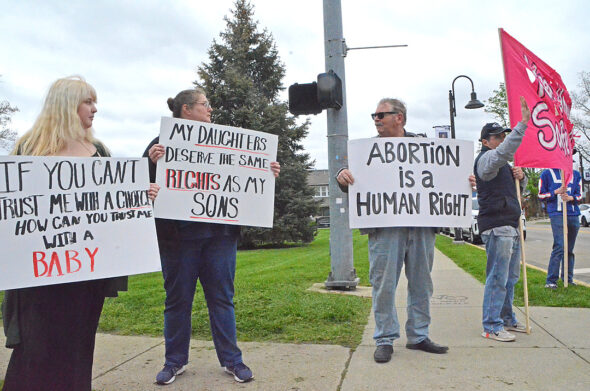 The leaked draft opinion was met with opposition from individuals and groups nationally, with Planned Parenthood and other health and rights organizations condemning the sentiments behind the draft decision. In a press release, Alexis McGill Johnson, president and CEO of Planned Parenthood, said that the court’s draft is “horrifying and unprecedented.”

“While we have seen the writing on the wall for decades, it is no less devastating, and comes just as anti-abortion rights groups unveil their ultimate plan to ban abortion nationwide,” she wrote.

In a statement to the News, Planned Parenthood media relations coordinator and member of the Greater Cincinnati Association of Black Journalists Maya McKenzie said that it’s important for Ohioans to know that abortion is still legal, but the impact of this pending decision is dire.

“The consequences of this impending Supreme Court decision will be swift and devastating for communities nationwide,” McKenzie said. “Especially those within BIPOC, LGBTQ+ communities and folks with financial strains and lack of access to transportation.”

In a phone interview, local resident Elliot Swan said that many people do not understand how turning over Roe would disproportionately impact the trans community — a community that has historically had little access to healthcare. Swan, a trans man who has been gender nonconforming his whole life, said that conflating gender and sexuality can be harmful in conversations about body autonomy.

“There are trans men who are on testosterone and can become pregnant,” Swan said. “Some trans men have a cervix and a womb. The idea that someone can force you to do something you don’t want to with your body is frightening.”

“It is pretty obvious how this could become a problem with birth control and other things,” he said.

Villager Marianne Whelchel said that she was distressed about the leaked draft considering all the work that was done prior to the Roe decision.

“I thought this was settled,” she said.

A former professor at Antioch, Whelchel said that her experience visiting family centers and daycares in Europe and Cuba in the early ’90s showed her just how much the U.S. is lacking in support for parents.

“It’s jolting and upsetting,” she said. “[The U.S. government] cares more about an unborn fetus than the children already here.”

At the downtown demonstration on Saturday, concerned villagers gathered with signs supporting the right to an abortion. Hayes and Burke said they organized the rally because they felt compelled to do something. 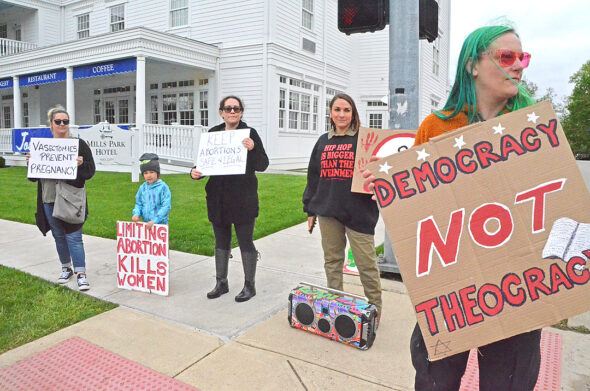 “[Access to safe abortions] is an issue I feel very strongly about,” Hayes said.

Several participants brought their families, telling the News that they felt it was important for people of all ages to realize the ramifications should the Supreme Court move forward with this draft decision. Villager Sharon Mohler said she was there because she was upset by the constant attack on women’s rights.

Local attorney Laura Curliss said that, as both a woman and an attorney, she was dismayed by the court’s approach to Roe.

“If this is the final opinion, it totally discredits the [Supreme] court,” she said.

According to Burke, the purpose of Saturday’s demonstration was to bring awareness to the issue before the court pens a final decision.

“We wanted people to feel like they could do something,” she said. “And I truly believe that public demonstrations make a difference. If the decision goes through, we need to be able to build communities so we can support each other.”