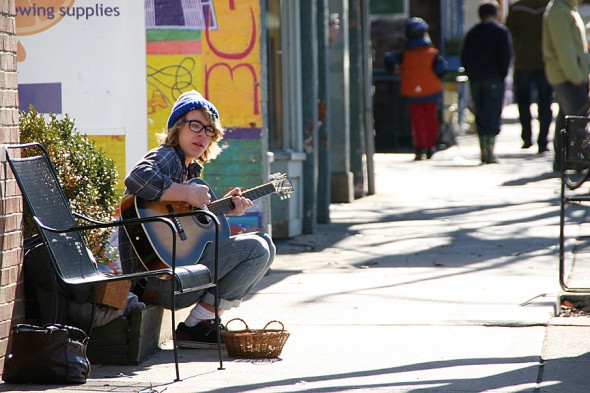 Buskers may soon have to abide by stricter rules when performing on downtown Yellow Springs sidewalks.

On Monday, Oct. 17, Village Council members continued their ongoing examination of the impacts of busking with a first reading of an ordinance that aims to regulate the volume, frequency, location and permissibility of impromptu downtown street performances.

Should the regulations be codified into law following Village Council’s second reading of the ordinance at the group’s Nov. 7 regular meeting, downtown performers will no longer be allowed to electronically amplify their voices or any music in public places.

Further, persons 18 years or older who intend to perform more than three times a month must get a permit through the Village government. Permits — which will cost an initial fee of $15 and may be renewed annually for $3 — must be on display at the time of a given street performance.

Violations of those proposed rules may result in not only the revocation of the permit, but also a misdemeanor charge in cases of ongoing offenses.

“There are two pieces to this,” Village Clerk Judy Kintner told Council members when introducing the ordinance. “One is the performer’s agreement which does need to be updated. The other side is if Council feels that, ‘Yes, we’d like the police to be able to enforce certain aspects of that agreement,’ then you’d want to pass this legislation.”

While the Village of Yellow Springs currently doesn’t have any codified rules or regulations regarding busking or street performances, it does have an informal “Street Musician Agreement” policy that has been in place since 2014.

Modeled after a Portland, Oregon, document, the informal agreement limits street performances at a single location for an hour at a time, after which a performer is asked to move to a different location or take an hour-long break. Additionally, the agreement discourages amplification and stipulates that business owners and the public be respectful when approaching musicians.

“The performance agreement states that if a performer isn’t respectfully following the tenets of the [agreement], the police can be called. But that is not the case,” Kintner said. “There is nothing in our ordinances at all that says you should move along after a certain time. That’s why this came legislatively.”

“Our citizens have asked us to look at this [issue],” Housh said. “What Judy and [Yellow Springs Chief of Police Paige] Burge reminded us of is that if [street performances] become a problem, there’s nothing they can do under the current lack of an ordinance.”

However, as PACC member Amy Wamsley told the News in a separate interview, the ordinance that Council reviewed at its Oct. 17 meeting doesn’t fully align with the commission’s recommendations. As Wamsley told Council members at their June 21 regular meeting, the PACC recommended:

• Having one location on the Village website for busking policies that uses clear and consistent language;

• Eliminating the registration requirement unless there is a monitoring system in place;

• Providing clear and accurate instructions, including a map of where street performers can perform; and

• Creating cards for distribution that include Village standards for street performers, and indicating areas designated for amplified and/or group performances.

Additionally, the PACC recommended that any amplification in the downtown business area may not be permitted. Rather, those performers wishing to have their music or performances amplified ought to position themselves at a permitted location as outlined in a “creative area map” — a map, which has yet to be defined, and as such, was not included or referenced in the proposed ordinance.

“Perhaps there needs to be more of a discussion and some clarification of what’s exactly meant by ‘downtown’ before we restrict where and when buskers can play,” Wamsley told the News.

Speaking on behalf of the PACC, Wamsley said because of the lack of clarity and the disparities between the proposed ordinance and what her commission originally suggested, the PACC does not look favorably on the Village’s new legislation.

“We definitely don’t approve of a permit,” Wamsley said. “People who are busking might not have the money [to purchase a permit] which creates a barrier. We also feel strongly that the police should not get involved with enforcement.”

“I don’t have any reason to believe this is a significant issue,” DeVore Leonard said. “I am definitely not in favor of having a police presence for something when there isn’t a substantive problem.”

Brown said her experiences have led her to believe that buskers are generally responsive to citizen complaints, and that police-based enforcement may escalate disagreements.

“Whenever there’s an issue with amplification, and it gets to be too loud, then the public and shop owners typically say, ‘Hey, turn it down,’” she said. “It’s self-regulating.”

MacQueen concluded the first reading of the ordinance by suggesting that it be amended before the second reading to restrict amplification only during certain times.

One local busker, River Walling, 22, told the News that he’s dismayed with the proposed ordinance — particularly with the prohibition of amplification and the requirement to get a permit.

“It seems like a way to pick on the Yellow Springs street scene,” Walling said. “Nobody is going to want to pay to busk, especially if they can’t use amplification with [traffic] and loud people going by.”

Walling can often be seen in the downtown business district playing what he calls progressive rock on his electric guitar. He said his performances typically earn him $15–$20 an hour on a busy Saturday.

“I have been asked to turn [my music] down before and my response has always been to do so as requested, and to be polite in the interaction,” Walling said. “But more often than not, people call the police instead of asking me directly.”

“Doing so [would be] pointless,” Walling said. “With the amount of noise coming from very obviously louder things like motorcycles, semi trucks and crowds of people — the level of amplification from buskers doesn’t even come close to exceeding those in volume.”

The next Village Council meeting is on Monday, Nov. 7