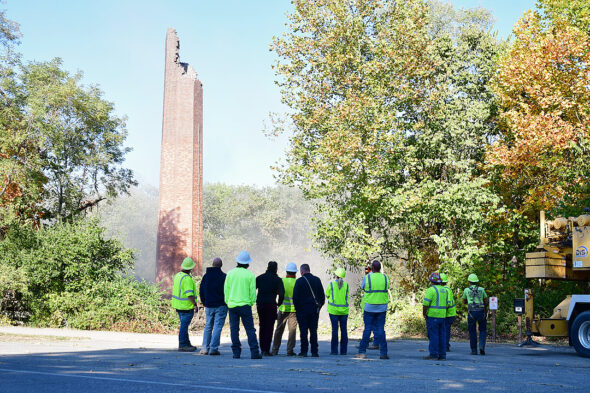 After almost half a day wrangling with the well-constructed smokestack from the decommissioned Antioch College power plant, workers take stock of the demolition process. The structure's walls were four feet thick at the base and were reinforced with steel rails. (Photo by Kathleen Galarza)

As of Monday, Oct. 10, the 125-foot-tall smokestack — a part of the decommissioned Antioch College power plant — is no more. Following herculean efforts that spanned the afternoon, construction crews successfully yanked down the octagonal tower at 4:39 p.m.

Although the tower was constructed nearly a century ago, its impressive structural integrity thwarted two initial attempts to pull it down; several steel cables were no match for the sturdy structure and snapped from the enormous tension.

With the help of heavy duty chains, multiple cables and a little extra elbow grease from crews, the smokestack finally crumbled on the third attempt to pull it down. The small crowd that was gathered on the edge of Antioch College’s campus watched in awe and amazement as bricks went flying and dust billowed from the destruction.

The demolition stems from a $4.25 million grant, the Campaign to Secure the Future of Glen Helen. Support for the demolition was also provided by the Clean Ohio Conservation fund, with matching funds from the Village of Yellow Springs.

Once the rubble is cleared, the Glen Helen Association intends to restore the site — which will include a spring-fed wetland — back to nature.