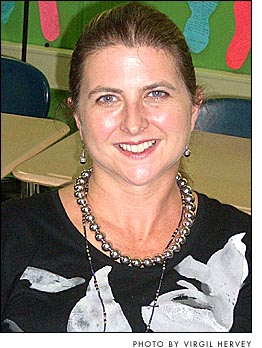 YSHS English teacher Elizabeth Lutz-Hackett was awarded the U.S. Dept. of Education “Star of Teaching” award in a surprise presentation on Wednesday, Oct. 1.

The cheer that went up in the gym at Yellow Springs High School last Wednesday afternoon was so palpable it was like a punch in the chest. Was it a state championship basketball game? No. The students that filled the bleachers seemed to realize it was even more important than that. In an award presentation that Principal John Gudgel managed to keep as a surprise until the ceremony was underway, English teacher Elizabeth Lutz-Hackett was named a U.S. Department of Education 2008 American Star of Teaching. She is one of only 51 recipients of this year’s annual award in the nation and the only one in Ohio.

Gudgel, who had kept the faculty and students wondering all day what the mystery assembly scheduled for the last period was about, kicked off the ceremony by introducing U.S. Department of Education Deputy Regional Director Todd Zoellick to present the award. After several suspense-filled minutes, during which no recipient’s name was mentioned, it became clear that Lutz-Hackett was to be the one as her family and friends began to file into the room.

Zoellick told the audience that the reviewing committee had received over 4,000 nominations and had spent three months reviewing their achievement data, involvement in school and community activities, and innovative methods of inspiring students.

“American Stars of Teaching are teachers who are improving student achievement, increasing opportunities for students, and using innovative strategies to make a difference in the lives of their students,” he said. “They are honored for their classroom contributions and successful incorporation of the No Child Left Behind Act.”

According to Zoellick, teachers can be nominated by their peers, principals, superintendents, education experts and officials, students and parents. In this case, the nomination was made by one of Lutz-Hackett’s students, Olivia Chen. Superintendent Norm Glismann, who was unable to attend the ceremony, wrote in a letter that was read to the assembly, “When a student takes the time to write a nomination letter for you as a potential award recipient, it certainly shows that you have had a profound impact on the lives of your students. That is why people get into education… to be a difference-maker. It is very clear that you are and have been a difference-maker in your classroom at Yellow Springs High School.”

According to Chen, she read about the nominating opportunity in a magazine she picked up one day at school. A senior, who is taking post secondary enrollment opportunity classes at Clark State, she had Lutz-Hackett for AP English last year and for 10-grade English.

“She deserves this award because she works incredibly hard trying to improve her teaching methods. She is always open to a better learning environment and manages to focus on the individual as well as the whole class,” she said.

In a recent interview, Chen recounted an incident where a student challenged Lutz-Hackett as to why analyzing literature is important. According to Chen, the teacher responded that it was important to learn how to think critically and challenge ideas that are presented in writing — not just accept them.

Fellow student and senior Zeke Hardman, who has Lutz-Hackett for four out of seven periods this year, said the purpose of the assembly had been a mystery, but he suspected that it had something to do with his favorite teacher. Everyone figured it out when her friends and family arrived, he said.

“I definitely think she deserves the award,” Hardman said. “She should have gotten it earlier. She should get it next year and every year. She makes class enjoyable. She laughs a lot.”

Fellow English teacher and friend Desiree Nickell hears the laughter from her classroom across the hall.

“She has tremendous energy,” Nickell said in a recent interview. “She is animated and alive. She seems to be divinely inspired — almost like she is challenging some higher power. She has a way with words and an ability to listen and pull ideas into a coherent whole.”

According to Nickell, Lutz-Hackett is more than a good teacher. “She is an incredible colleague, inspiring the other teachers.” Nickell credits her with spearheading last year’s Water Immersion program and this year’s Reading Literacy initiative.

“She is hardworking, caring, dedicated, passionate and energetic,” Principal Gudgel said after the ceremony. “She puts out a strong effort each and every day and has the energy of the Energizer bunny.”

Lutz-Hackett was truly surprised by the award, she said after the ceremony. The faculty had been wondering all day what the assembly was about. Sitting there, next to chemistry teacher and friend Michelle Edwards, the two began to kid each other, she said.

The two went back and forth like that until Lutz-Hackett noticed her sister-in-law entering the gym. Then came more family and friends and she realized that the assembly was about her after all.

“There had to be a important reason for my mother and father to drive three hours from Ironton,” she said. “Suddenly, I was overwhelmed.”

According to Lutz-Hackett, she was living in Yellow Springs and teaching at Fairmont High School when she met McKinney School English teacher Aurelia Blake at Antioch University McGregor, where they were taking courses together. It was Blake who suggested she should try to get a job teaching at YSHS. So she walked into Gudgel’s office one day during the summer of 2000 and told him she lived here and wanted to teach here. The next year a position opened up and the school board hired her.

“Being a teacher in my community is a whole way of living,” she said, echoing her remarks at the award presentation. “I get to have this really amazing essential role — to teach all the kids in this village. I’m exactly where I want to be. I’m very blessed and gratified. I have a great life.”