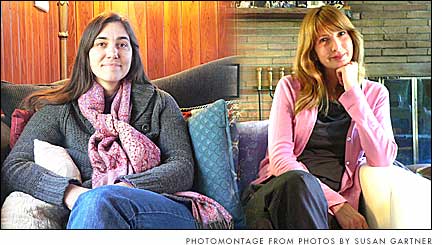 Kathleen Hotmer, left, and Judith Wolert-Maldonado of Yellow Springs are satisfied veterans of couch surfing, a new Internet-based way to travel by spending the night on the sofas of strangers. The women have found couch surfing inexpensive, safe and a good way to meet new people and experience different cultures.

“I’ve been traveling since I was a baby,” said Judith Wolert-Maldonado as she sipped her tea at The Emporium. “My mom and dad came to the U.S. from Argentina in the late ’60s. I was born in ’70 and by seven months old I was flying back to Argentina with my parents. I’ve been flying back and forth every two years so traveling is in my blood.” Wolert-Maldonado’s family never stayed in a hotel when they traveled. “We always stayed with friends or family. They would make a little bed for me on the couch.”

Her background couldn’t be more appropriate.

Wolert-Maldonado is a recent member of CouchSurfing Project — an online, non-profit, volunteer organization that matches up travelers with locals on every continent as a way to foster friendships and strengthen cross-cultural understanding.

One way to acquaint yourself with CouchSurfing is to go to their Web site (http://www.couchsurfing.com) and read their mission statement and Frequently Asked Questions, then browse through the member profiles. Another way is to hear stories from the couch surfers themselves.

“I love hosting,” said Wolert-Maldonado, who grew up in New Jersey. “We always had people staying with us — often Argentines who had just arrived in the U.S.” The close-knit Antioch alumni relationships also come in handy whenever Wolert-Maldonado travels herself.

Then in October, she found herself in uncharted territory.

“Out of the blue, a very distant cousin from Argentina called to let me know that he and my 15-year-old nephew were coming to the U.S. because my nephew was competing in an international motorcycle race,” Wolert-Maldonado explained. The two needed her to drive them to Birmingham, Ala., then translate for them during the weeklong event.

The cousin, a heavy smoker, would pay for all three to share a room.

Wanting to be a good host and with the race only three days away, Wolert-Maldonado scrambled to find a smoke-free, face-saving alternative. Fortunately, she had heard about CS. “I basically joined to find a quiet place to stay while they stayed in a motel.” She quickly registered online, filled out her profile, and started to search for an “open couch” in Birmingham. Carefully scanning the available CS profiles, she thoughtfully selected three females to contact and explain her situation. Almost immediately, a response came back: the host’s boyfriend and his male roommate, both CS members themselves, could put Wolert-Maldonado up in their home.

Wolert-Maldonado, her cousin, her nephew and all his motocross gear were off to the races.

Safety is a top priority for the organization. One of the ways in which CS members can stay safe and build trustworthy relationships is through the references and testimonials other members leave on profile sites.

“There’s this guy and on his profile there’s a picture of him wrestling with someone,” said Kathleen Hotmer, a CS member and savvy world traveler in her own right who stressed the need for couch surfers to exercise good sense. “When you read his profile, you can see he has a very aggressive personality. The things he says about himself and his attitude — it’s all right there.” Feedback from couch surfers who have stayed with this host are included on his profile with the negative testimonials highlighted in red. “He clearly says in his profile that you must wrestle with him before you go to bed and he will take pictures of you and it’s a requirement. Yet there are people writing on his site, ‘Oh, he was fun and we had a good time together but it was kind of weird because he wanted to wrestle me before I went to bed and take my picture.’ ”

Another way to keep the creep factor down is to join up with CS members in your area for a social event, as Hotmer did last winter when she got involved with the “Dayton Invasion,” a loosely organized group of couch surfers from the Dayton area.

“I think it’s a misnomer in a way to call it couch surfing,” said Hotmer, explaining that a fair number of CS members don’t offer free overnight accommodations but rather just the chance to get together for coffee or a meal.

Members of the Dayton Invasion will contact each other regularly and organize a dinner, afternoon hike, or game of paintball. If it’s a weekend event, such as the Oktoberfest Zinzinnati, group members will stay with CS hosts in Cincinnati. When she traveled to Paris earlier this year for her job as a costume designer, Hotmer got together for an afternoon with a Dayton member who was there at the same time. Feeling more confident about the organization, when she traveled to Vienna this summer, she stayed on a CS couch (actually an air mattress) for five days. It was everything she hoped it would be.

“There was another couch surfer there at the same time from Korea and so it was kind of an extra cultural experience,” Hotmer said of the trip. “One day she prepared this huge Korean meal as a way to offer her thanks to Angela [their Austrian host].”

The age-range of couch surfers varies widely. Siblings Andrew (22) and Alex (21) Glowaski are enthusiastic supporters of the organization. As college students who have studied abroad, they have already racked up many positive experiences surfing, hosting, and attending CS events in England, Ireland, Scotland, Spain, and Chile. Andrew even brought their mom, Lori Askeland, to a CS event in Belfast, where they played on a trivia team made up of couch surfers. Hotmer and Wolert-Maldonado are both in their thirties. After Hotmer left her Austrian host, two more couch surfers arrived — a couple in their seventies.

But what became of Wolert-Maldonado?

“These two really sweet young men came to my rescue and saved my mental well-being,” she said of her gracious and hospitable hosts. “They gave me the password to get into the building — a beautiful space right in downtown Birmingham. I had a comfy couch all to myself. I even had two little cats that slept with me every night and I’m a cat lover. They made the whole trip more pleasant and healthy.”

After the race was over and her cousin and nephew were safely on a plane back to Argentina, Wolert-Maldonado finally got to spend some quality time with her hosts and the woman who first responded to her panicked post.

“She took me to a real southern Alabama restaurant,” said Wolert-Maldonado, still high from the experience. “I had okra, fried green tomatoes, and greens in a real down-home diner. That is what couch surfing is all about.”

That evening, she had dinner with a fellow racetrack translator and some of his friends. Energized by the lucky turn of events, Wolert-Maldonado decided to use what was left of her vacation to drive — that night — to the Gulf of Mexico. The young men gave her driving directions and the next day she was swimming in the gulf. On her return trip, she stayed at their place.

“They gave me food for the trip, they woke me up at 6 a.m. and made me breakfast before I drove back to Ohio,” she said.

As their couch connections expand, Hotmer and Wolert-Maldonado look forward to hosting surfers in their respective Yellow Springs homes.

“Couch surfing has opened me up to when I was younger and traveling and trusting strangers who had similar energy,” said Wolert-Maldonado. “There’s a shared love of travel and meeting new people and learning about new cultures.”