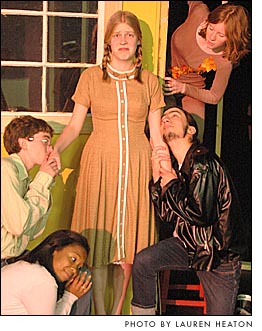 In their 1950s version of Shakespeare’s ‘A Midsummer Night’s Dream,’ Kelly Miller as Helena, center, is driven mad by her admirers, Demetrius, played by Max Fleishman, and Lysander, played by Adam Zaremsky, who is himself sought by Hermia, played by Zyna Bakari. The mischeivous Puck, Shelley Murphy, looks on from her perch. Performances will take place at Mills Lawn gym on Fridays and Saturdays, Nov. 14, 15, 21 and 22 at 8 p.m., and Sundays, Nov. 16 and 23, at 2 p.m.

If Shakespeare had lived in the 1950s, how he would have dressed, where he would have lived and the way he would have set his stage is surely just what the Yellow Springs High School thespians have dreamed up for the fall production of A Midsummer Night’s Dream. It’s a jeans-wearing, hightops-sporting Theseus spouting, “The lover, the lunatic and the poet are of imagination all compact,” and a Puck on Heelys to ruin or rescue on this retro-modern stage. But the poet’s beloved meter with its mischievous meanings and universal themes are timeless as ever, and many of the actors are enchanted by the magic of Shakespeare for the first time in their dramatic careers.

The first and most intimidating task for the actors was to memorize their lines in Elizabethan English. “Just thinking about it, it’s scary,” said Elliot Cromer, who plays Bottom, one of the blue collar actors also known as the “rude mechanicals” because of their crude theatrical skills. German exchange student Leon Reichert, another rude mechanical, wanted to modernize the play’s language to make it easier to understand.

But trusting director Kelly Pekar and working through their reservations, the players gradually grew more comfortable with their lines and began to see both Shakespeare’s humor and the double meanings implied in his words.

“If you think about it in context and you try it, it’s easier than you think,” said Kelly Miller, who plays the lover Helena. “Shakespeare writes exactly what he wants” to communicate, Cromer said, and all of it, it turns out, “is very clever,” said Anne Weigand, who plays the fairy Peaseblossom.

Out of trusting and trying, a deep respect was forged between this contemporary generation of multicultural players and the dead, white 16th century bard, whose bawdy sense of humor and profiles of human nature are so honest that they transcend the epic divide. Michelle Click gets it that when as the fairy queen Titania, she says “feed him with apricocks,” and “for night tapers crop their waxen thighs,” she is referring to sex. They get the feminist themes exposed when Egeus, played by Kevin Mayer, orders his daughter Hermia, played by Zyna Bakari, to marry one she does not love, or the way that Hippolyta, played by Laura Hyde, is lauded as the perfect housewife. And they see that amidst the layered plots and complex intermingling of characters, according to both Miller and Cromer, Shakespeare is really talking about love’s toxic power to invoke chaos.

Pekar, a musical theater student at Wright State University, chose A Midsummer Night’s Dream partly because of the novelty for many of the high schoolers and because she felt the playful tone would be less intimidating for actors without a lot of experience with Shakespeare. The popular comedy also has a large cast that could accommodate the large drama program, she said. And Pekar also simply has a passion for Shakespeare, whose sophistication she finds is made most accessible when livened by a company of actors.

“In high school Shakespeare gets a bad rap because it’s usually presented in a scholastic way,” Pekar said. “I try to get it up on its feet as soon as possible, to wake the text up and get the kids to see that the ideas and themes are so pervasive in our storytelling culture.”

Pekar has been acting since she was 7 years old, but didn’t discover that she could produce a show of her own until as a high school student she had the opportunity to direct her first shows Bye Bye Birdie and Honk!, a version of the Ugly Duckling. Though she is busy with school and is currently starring as Maria in a production of The Sound of Music at the Cincinnati Aronoff Center, Pekar is excited about turning her training into practice and getting “back in the game” with the YSHS theater group.

This particular troupe of actors she finds sensitive and compassionate enough to create a trusting environment in which they feel safe to take bold risks and try new things.

“It’s one of the trappings of Shakespeare to think it’s enough just to say the lines,” she said. “But it’s about reaching through the text and creating meaningful moments with the audience.”

The players feel that encouragement and are eager to take on the challenge. According to Weigand, Pekar asked the fairies to experiment with different vocal sounds and to develop their own unique voices. She then asked them to play around on a keyboard and engage as a group to work up a tune for their lullaby using their distinct voices.

“It was a lot of fun because she just let us explore,” Weigand said.

According to Cromer, he finds value in getting the space to just play, which is what acting has become for him. And by experimenting with it, he is gaining an ease and comfort with “messing around on stage in front of people,” he said.

A play in which four lovers apply their affections to the wrong person, a gang of laborers put on a horrible show, and a fairy queen falls in love with a Bottom turned into an ass, deserves a little messing around. Shakespeare would certainly approve.

For information, call 767-2602. The box office will be open one and a half hours before show time.