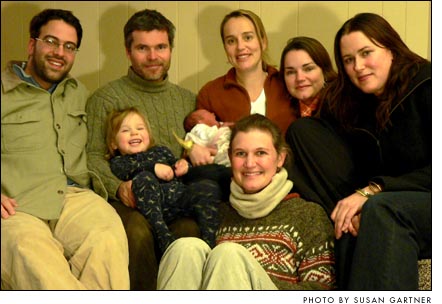 Last Thursday Jalana Lazar and her husband, Naysan McIlhargey, had not been home long when the phone rang. They had just spent the evening with long-time friends Molly Lunde and her husband, Lee Kibblewhite, Molly’s sister, Aimee Maruyama, and Molly’s childhood pal, Miranda Lloyd (a former Yellow Springs resident visiting from New York). Molly, pregnant with her second child, was planning to deliver at Miami Valley Hospital on New Year’s Day, two weeks away. Two and a half years ago, she had experienced a long and difficult delivery with her firstborn, Lily, and was understandably anxious about repeating that ordeal.

To ease her friend’s troubled mind, Jalana, a nurse midwife at Good Samaritan Hospital, reassured Molly that if she ever felt it was time to deliver, Jalana would come over and check to see that it was, indeed, time to go. “Call me if you need me,” said Jalana to Molly as she left the gathering.

An hour later, at midnight, the phone call came. Jalana immediately drove back to Molly’s house.

“You’re doing such a good job!” Jalana said to Molly after examining her, using an ultra-calm and soothing voice that belied the urgency of the situation. “You’re doing so well that we need to go the hospital right now and I’m going to come with you just in case you need help on the way.”

(Sitting in their Miami Valley Pottery showroom the following day, owners Jalana and Naysan were much more relaxed and unhurried, retelling the story of that “holy smokes!” night.)

After her proclamation, Jalana, Molly and Lee quickly got into Molly and Lee’s minivan (Molly getting in the back seat) while support team Aimee and Miranda followed behind in another car. The two vehicles didn’t get very far. Halfway down Hyde Road at State Route 235, Jalana called Aimee on her cell phone. The caravan needed to turn around immediately and go to Jalana and Naysan’s house, which they had just passed. Then Jalana told Aimee to call 911.

“It must have been a hilarious call,” said Aimee the next day, trying to remember what she possibly might have told the police. “I didn’t know the address of where we were going. I knew almost nothing about what we were doing. I said we were on our way to Miami Valley Pottery and we weren’t going to make it to the hospital.”

As the two cars pulled into the pottery driveway, the baby was crowning.

“The first thing I heard was screaming that sounded like a cat,” said Naysan, who had been blissfully asleep up until this point. “I thought the cat was being stepped on.”

While Aimee ran into the house frantically searching for blankets and sheets for her sister, Naysan realized what was happening, got out of bed, and helped gather towels. The “cat” sound he heard was his friend, Molly, screaming in second-stage labor in a minivan parked in his driveway while his wife, Jalana, focused on trying to make her comfortable.

As Aimee squeezed back in the van, stationing herself behind Molly to help lift and support, Jalana positioned herself half inside the van, her other half sticking out the side of the van with the sliding door open. Meanwhile, Miranda-from-New-York coached from the front seat while documenting the event with her camera.

The two men worked in tandem as a kind of abbreviated bucket brigade: the women calling out for certain items — hot water, blankets, towels — and the men retrieving the appropriate items from the house.

“It was like being in a movie,” recalled Lee afterwards. “It’s that classic line of ‘We need hot water and towels!’ ‘Right! Okay!’ So I ran in the house and Naysan is there, half-naked with a sheet pulled around him. ‘We need hot water and towels!’ I told him and he said, ‘Right! Okay!’ One-handedly he’s holding this bedsheet around him, getting hot water and towels and passing me things like napkins and Jalana’s sweater — things that were totally inappropriate. He saw the sweater and said, ‘Oh no, we can’t take that.’ So he took that back. It was like this blur. In my mind I thought, ‘This is like in a movie. This is what the father figure does.’ I was in that movie scene and didn’t know how to make hot water. It’s ridiculous. I’m a trained chef for God’s sake and I couldn’t make hot water!”

Epic-like imagery began to take shape: womenfolk huddled together in an emergency makeshift delivery room, cramped and unsuitable for the birth of a baby; mother and father unprepared for such a blessed event to take place under such strange circumstances. All were bathed in a mythical glow from the interior light of the Honda Odyssey minivan.

The stars in the sky looked down where they worked. The frost was cruel (along with the sleet). Two cats kept watch over their flocks of mice, birds, and other wildlife where Miami Valley Pottery shop and house lay. Sirens in the distance signaled the impending arrival of the Greene County Sheriff and three Miami Township Fire Rescue ambulances -— wise men and women (EMTs) who traversed afar, bearing emergency medical supplies.

Fortunately, Molly, although in excruciating pain, was not filled with mighty dread.

“I felt so comfortable because of the way that Jalana eased the situation with her words,” said Molly after the shock had worn off. “She spoke so calmly, not a hint of panic, and I knew everything was going to be alright. I’ll always remember her voice.”

While they all waited for the squad to arrive, shepherd/potter Naysan served tea.

“He’s such the host,” said Lee of his friend, grateful for the support he provided. “Gabriella was not born long and Naysan turns up. Finally he’s got clothes on and he’s got mint tea in one of his own teapots, and asks Molly if she’d like a cup. Then he brought out a bowl of grapes.”

All was calm, all was bright.

While the babe was wrapped in swaddling towels and the group wrapped their collective head around what had just happened, the sheriff and EMTs arrived. Lee cut the umbilical cord, then he and Molly and the baby were transferred to an ambulance and taken to Miami Valley Hospital. Aimee stayed with them in the hospital, snuggling in love’s pure light with her sister, brother-in-law, and new niece while Miranda stayed behind to shepherd their other child, Lily. Treasures of Gold Rush apples, cranberry cookies, and grapes from Naysan sustained them through their stay.

Later, when they looked at their cell phone log, Molly and Lee were shocked to see the timing of events. “When we decided we were going to turn around we called 911,” said Molly, “and 13 minutes later Gabriella was born.”

Mother and child, tender and mild, were released from the hospital the next day while Lee checked in on their store, Asanda Imports, which had just moved into its new downtown location and was being tended to by Miranda.

“The smile has not left my face,” said Molly. Gabriella, who laid to rest on Molly’s lap, was sleeping. “I know that Jalana and Naysan will forever have a huge place in my heart. I’ve known them quite a long time and there’s a connection between our families. But it’s even more strengthened now. We owe them a lovely set of towels. Almost all of them from their house!”

The family and shepherds returned to their lives, telling all of the things they had heard and seen. And all who heard it were amazed.