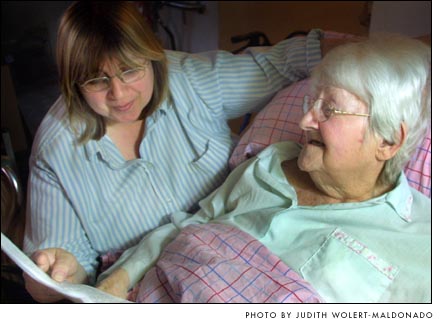 Liz Hale, left, will read an excerpt of a piece written by Gladys Wessels, longtime women’s rights activist, former professor at Wright State University and early member of Women, Inc., at the Women’s Voices Out Loud event on Saturday, March 28. Wessels cannot attend the event in person due to her health.

One woman speaks of her individual experience of growing up in the late 1920s. And as she voices her testimonial, other women recognize in her story, a shared struggle to be heard and to be empowered. On Saturday, March 28, at 7 p.m., over 40 local women will share their personal stories at the annual Women’s Voices Out Loud event at Bryan Community Center.

Longtime activist for women’s rights, 86-year-old Gladys Wessels of Yellow Springs, grew up as the only girl among several brothers. She loved baseball and wanted to play with the boys, but they would not let her because she was “just” a girl.

“I began to notice that they had privileges that I didn’t have,” Wessels recalled recently from her bed, surrounded by scrapbooks and photos of local women’s rights advocates she has collected over the past 40 years. “I knew that something had to be done!”

Others felt the same way. Yellow Springs was a cradle of consciousness-raising for a variety of social change movements, especially during the 1970s, according to several local women interviewed for this article. Women in Yellow Springs, in the Miami Valley and across the United States were recognizing the need to begin voicing their stories in a public arena. In the late 1970s, several local women such as Jean Hudson, Joan Margaret, Dorothy Smith and Susan Carpenter, began to write for “Women’s Voices,” a newspaper column in the Yellow Springs News.

According to Carpenter, the early rumblings of local women’s self-expression led to the first Women’s Voices Out Loud, an event held in the meeting room of the Yellow Springs Community Library in November of 1980. Carpenter was one of the organizers of that first event.

“We had this table full of pies and a dollhouse [built by a participant] and some quilts.” Carpenter, who is now assistant professor of English at Bluffington University, was just beginning to realize her desire to be a writer and looked forward to writing her poems, to be read at Women’s Voices Out Loud events in the following years.

The first piece she read on that fall day was “The Talking Housework Blues.” Carpenter accompanied her recitation by tapping her leg in time with a spoon. Her friend, Carolion, who will perform a piece this Saturday, accompanied her on guitar. “In some places, when you’re performing, it’s kind of a competition,” said Carolion, who was writing her first musical during that time. Women’s Voices Out Loud “is more like a braiding together of our energies and our goodwill.”

During the first Women’s Voices, Carpenter remembers the uncertainty that women felt at that event. “It is difficult to convey how hesitant women were, to stand up in front of people and perform their work,” she said. Laurie Dreamspinner, one of the three facilitators of this year’s Women’s Voices event, believes that the uncertainty to speak, for some women, has not gone away. “It’s still difficult for women and girls to speak out without apologizing, and to expect to be heard.”

This year’s event is the fifth one that Liz Hale is helping to facilitate. “This is something that wants to happen, and we just provide the space and step back and let it happen,” says Hale.

She stresses the potential of transformation and coalition building that this event can bring about for its participants, whether they are performers, visual artists or audience members. “We write about our lives…about the forced silence that women endure,” Hale said. This event “is nurturing a safe space and is a place of healing. It is a place where I think we claim each other as women and lift each other up.”

The rehearsals for the Women’s Voices Out Loud events seem to provide preliminary “safe spaces” for performers to try out their songs, dances, skits and recitations in front of a gentle and supportive audience. Over 37 women showed up at the rehearsal Sunday evening and arranged themselves in a large circle of chairs in the great room of the Yellow Springs Senior Center. One of the first participants to rehearse her piece stopped herself in the middle of reciting her poem, “I’ll be better on Saturday night,” she tearfully paused. Another participant responded to her immediately, “You can cry tonight,” followed by appreciative nods by the other women present. The rehearsal continued with the women taking turns presenting their creative pieces to the group, while Hale timed each performer.

Judging from the variety of ages and experiences that were displayed by the rehearsing performers Sunday, this year’s Women’s Voices Out Loud event promises to give audience members a deeper clue into the lives of these women. They will share personal stories ranging from topics about grandmothers, mothers, personal triumphs, trauma and communities of women to cooking, cultural exchanges, political leaders, loss and local weather storms.

In addition to the dancers, singers, writers and performers participating in the event, local visual artists will contribute their works to the Community Gallery on the second floor of the Bryan Center. JoAnn McKee is the curator of the visual art portion of Women’s Voices.

“This is always my favorite show to hang because of the absolute diversity,” she said. “There seems to be a relation from piece to piece.”

According to McKee, about 20 to 25 pieces will be in the art show, including various watercolors, collages and quilts, of which several will be available to purchase. She encourages people to visit the gallery before the event or during the 20-minute intermission.

As for Gladys Wessels, who once brought Ms. Magazine founder, Gloria Steinem, to her “Women in the 70s” class at Wright State University in 1972, she has never published or read or performed any of her writings in front of an audience. Now Wessels has difficulty physically moving around and wishes that she could be a participant in this year’s Women’s Voices Out Loud. Hale, who only met Wessels a few hours before the Sunday rehearsal, was so inspired by Wessels’ work, that she has decided to read an excerpt of an article written by Wessels, out loud, at the event on Saturday night.

Although Wessels will not be present to hear her words read to the audience, she understands that this simple action will liberate her and other women and bring their struggles full circle. She believes that women still have a long way to go, in the efforts for equal rights.

“Women are going to have to take over again,” sighed Wessels, as she handed off the article she wrote so many years ago.

* The writer is a free lance contributor to the News.