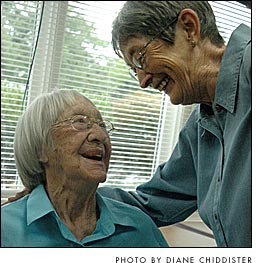 Ruth Bean has lived long and fully, from teaching in a midwest country school to walking among lions in Africa. And if she doesn’t remember every detail, given that it’s been 100 years this week since her beginning, she is happy to relive parts of that journey with visitors who do.

“Remember, Ruth, when Ralph Ramey gave you the Volunteer of the Century award at the Glen?” Bean’s nephew Rodney Bean asked while sitting in her room at Friends Care Assisted Living last week. Bean had been the volunteer coordinator for Glen Helen for nearly 20 years in the 1970s and 80s.

Rodney promised to bring his aunt the plaque that was hanging at the family’s farm on Snively Road, and she was excited to see it, almost as if for the first time.

“I’ve never had anything so nice,” she said.

But for every memory that eludes her, Bean has a dozen more to fill the void, and most come in vivid detail, which she can still see when she closes her eyes and steps back into her past. Recently she zeroed in on her first day of teaching in a one-room school house in frigid North Dakota, near Glen Ullin, where she grew up.

“It was the first day of January, cold but clear out, and they came for me in a sled with a board across the sides for the teacher to sit on,” she said. “But it was 20 degrees below zero, too cold to ride up there, so I snuggled down on the floor of the sled for the 14-mile ride in deep snow.”

It was her first job after graduating from normal school, in the days when the teacher chopped her own wood, made hot lunch for the students and shoveled out snow drifts like one that got inside the school and went from the door all the way to the teacher’s desk. But Bean didn’t mind the work because she adored the children she taught.

“If anyone said you could have anything you liked best, it would be my little country school,” she said. “Every child was just a darling, the nicest kids I ever saw.”

Bean taught in North Dakota for about seven years before 1943, when she joined her brother, Morris Bean, in Yellow Springs. Morris and his wife Xarifa had graduated from Antioch College and were operating the local foundry, Morris Bean & Company, while raising their five children on a 140-acre farm. According to Rodney Bean, it was his parents, grandparents, aunts Ruth and Blanche, and he and his four siblings under one roof. While his parents were busy at the foundry, his aunts ran the household, with Ruth as the playful sympathetic one who read them stories and helped with piano lessons.

Bean started out teaching fourth grade at the Dayton Street school (Union School House), a position she found while she was playing Saturday night poker with the grade school superintendent. To keep the children engaged and to “have some fun instead of sitting there with books all day long,” she taught in a self-adapted Montessori style. If the students said they wanted to build a village, well then, she recalled, that’s what they would do. Using a wagon, the students picked up sand and soil from the foundry and set to work building model streets and structures. Among her students were Joy Baldwin, Jo Dunphy and Virginia Hamilton.

“That project kept them busy for weeks! If you keep the children busy, you don’t need to worry about discipline,” she said firmly. “One parent asked me why her child never had homework. I told her I don’t believe in homework—does your husband return from his job at night with homework?”

Bean later worked fulltime for Fels Research, and she would spend 22 years coordinating communication with all the families involved in the longitudinal study. And when she retired from there, she put her energy in the Glen, where she could focus on her love of flowers and birds, an interest she shared with longtime friend Beverly Price.

“We’re both from North Dakota, and we’re probably the only two in town from that state, let alone that we come from the same area, near the Montana border,” Price said.

Though Bean is 20 years older than Price, they also had teaching in common, and were drawn together to share familiar stories.

“I would talk about the Killdeer Mountains, and she would say, ‘oh, we used to go for picnics there,’ and then she would tell me about going with her boyfriend to Heart River, where I used to go, and it was so much fun to trade those stories,” Price recalled. “My uncle was a rancher then, and he and her father were men of many skills — those really were pioneer days.”

Some of Bean’s life was traditional, but she seemed to buck convention too, in favor of being independent and taking any chance she got to travel with her sister and cousin to visit relatives in Sweden, Norway and Finland. She went to Africa several times with the Glen Helen Association group and took dog sledding trips from Anchorage to the northern tip of Point Barrow. She also liked to go white water rafting on the Colorado River, and once in her mid-’70s, she travelled to British Columbia to be taken by hydroplane to camp and hike around Chilco Lake.

Bean has lived through two world wars, the first as a young person, when she helped the Red Cross by knitting wristlets to keep soldiers warm and rolled bandages with sanitary gloves “for days and days.” During the second war she witnessed rationing from food to the gas she needed to taxi Fels study participants to Yellow Springs. She was bold enough to request that the government provide supplemental fuel coupons, and she was granted what she asked, she recalled matter-of-factly.

For her birthday on Tuesday, Bean’s family held a party on Sunday at the Friends facility, where almost 50 fans came to see just how does one age with grace. Price said she admires Bean’s ability to make people laugh with her wry sense of humor. And throughout her years, Bean has also maintained an openness to the many cultures, people and places she’s visited that are all a part of her now, Price said.

“She is so curious and interested in so many things, and she is always interested in new ideas,” she said. “That doesn’t mean she would change her own, but she wasn’t going to dismiss people just because they had different ideas about things.”

Telling stories about her life last week, Bean looked out at her bird feeder and tried to describe when it was that she first got interested in birds as a child in North Dakota.