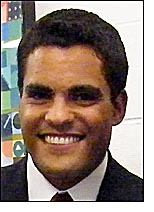 The Yellow Springs School Board hiring committee announced Thursday, April 8, that Mario Basora is the finalist for the position of superintendent.

Yellow Springs school board members will soon visit Wyoming Middle School in Cincinnati, the top performing school in the state — and the home school of superintendent finalist candidate Mario Basora, who was announced as the finalist at the Thursday, April 8, school board meeting. In what hiring committee members have called a very important step in the candidate vetting process, board members will meet office staff, connect with teachers, and hopefully happen upon parents and community members to get their input.

The performance index is a weighted calculation charted by the state’s Department of Education, which Basora, during his community presentation on Wednesday, April 7, said is the best indicator of a school’s success in educating its youth. The score penalizes schools for students who, without medical reasons, do not take achievement tests, and weights those students who test as limited, basic, proficient, advanced and accelerated together. According to the state, Mills Lawn Elementary has a performance index of 99.4, while McKinney/YSHS has a score of 101.6. The state average is 92.9.

Though he has never operated as a superintendent, and is currently finishing up his last classes to get his licensure, Basora presented other statistics that he said indicate he is ready to lead the Yellow Springs district into the future.

As principal of Princeton Middle School, he helped raise the performance index from 88 to 93, reduced school out-of-school suspensions by over 60 percent, increased the reading scores of African-American students from an average of 59.7 percent to 71.6 percent, and increased the state reading passing rate to 86 percent, school-wide.

Basora said he sees literacy as a civil rights issue, noting a study that found approximately 70 percent of prisoners to be functionally illiterate. He also said that 21st century education must find a way to harness technology as a resource for educational purposes. “Critical pedagogy” is the educational philosophy that grounds his practices, Basora said.

Born in the Bronx to two Puerto Rican parents, he was raised in Santa Anna County by a single mother in an area that had a high concentration of poverty. She was “a tough woman” who kept him in line as a youth, Basora said, although he was an average student getting average grades — until a particular teacher inspired him. Then, he went from “Cs” to “As” overnight, he said, and earned his first bachelors degree from California State at Fullerton in political science. Encouraged to consider teaching youth because of his energy and enthusiasm, he went on to earn his second bachelors with teacher licensure at Northern Kentucky University in social studies.

Beginning his teaching career in -seventh-grade social studies, he also taught high school sociology, African-American culture, and government, while also earning a masters in educational leadership. First serving as assistant principal, Basora was recruited to the role of principal at the same middle school where he began his teaching career. Working with his old colleagues again was a wonderful experience, he said, and they were able to work together to make significant improvements at Princeton Community School.

The Yellow Springs position is the only job Basora is currently considering, he said, as he is pleased to be in the position of principal at Wyoming Middle School. However, he and his wife, Alice, would like to raise their family in this community, which they visit at every opportunity. Basora’s wife is an artist who has sold her wares at Art on the Lawn and currently sells jewelry through Urban Handmade. Basora said this means his family is already invested in the community, and they would like to become an integral part of it, raising his children alongside others who value tolerance and education.

When not administrating, Basora can be found golfing (which he believes is good for humility), hiking with his family or coaching his daughter’s softball/t-ball team.

Board members will soon conduct a site visit to Basora’s district, meeting with staff, teachers, and parents, and expect to negotiate a contract in April and vote to approve it in May.