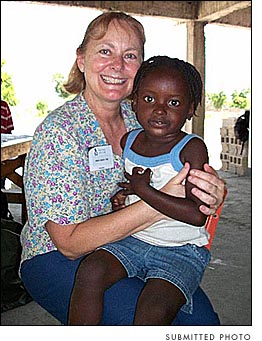 Nurse midwife Cindy Farley spent a week in March in Haiti volunteering medical services to residents of the earthquake-torn city of Port-au-Prince. She will give a talk with slides of her visit at a Presbyterian church soup supper fundraiser on Friday, April 16, 5–7 p.m. Tickets are $7; kids under 5 free.

Local nurse midwife Cindy Farley had provided medical care in underdeveloped countries before. So when she agreed to go to Haiti for a week at the end of March, she thought she was well prepared for the job. And she recalled the images of nurses in the early 1900s who travelled to poor, remote areas on horseback to deliver babies who were said to have been brought in the saddlebag.

What she found when she arrived in Port-au-Prince on March 27, which she will talk about on April 16 at the Presbyterian Church, was something like the poverty she had seen in cities in Guatemala and Honduras, except with an earthquake ripped through it. The city was dusty and polluted and suffering from oppressive heat and humidy, which served to heighten the aroma of things gone badly.

“If only I could have brought back the smells, you would have quite a story,” Farley said.

But instead of stopping to take in the grief, she slept off the jet lag and got straight to work in the clinic she was helping to create with an organization called Midwives for Haiti. With limited supplies, the other physicians, nurses, dentists and midwives in her medical team set up in Cité Soleil, the city’s poorest neighborhood, not far from the tent hospital Doctors Without Borders had established just outside the building they had occupied before it was destroyed by the quake. A pastor at a nearby church had informed the congregation that a medical unit was coming to treat the sick, and those who needed medical attention should come to the church. And they came.

Farley’s medical team saw 200–250 patients in each 12-hour day, she said, and she and two of her former student midwives saw 40–60 women a day, some of whom were pregnant and others who simply needed triage. They dispensed medication, gave shots, conducted aspirations and eye irrigations and referred the more severe cases to the hospital. They treated many people who were simply suffering from malnutrition and pica, a disorder created by eating non-nutritive substances, such as Haitian mud pies.

One woman was breastfeeding newborn discordant twins, meaning that one baby got more blood supply and was thriving more than the other.

“The mother had been feeding the larger baby first; her thinking was that he came first so I should feed him first. This continued the small baby’s poorer nourishment and would have eventually caused serious problems for that twin, even death,” Farley wrote in an e-mail last week. “We were able to intervene with teaching and positioning assistance and had this mother come back several times to reinforce her learning.”

Another patient, a tall and lanky 14-year-old boy, presented symptoms of malaise and lethargy. Upon questioning him, the team discovered that his parents had been dead two years and he was living alone and fending for himself.

“His story made me cry!” Farley wrote. “Our team leader, Dr. Lerla Joseph, hooked him up with the local pastor and pledged to pay his way in school. This will provide him with one meal a day, support of the teachers, knowledge and hope for the future.”

The team saw others, such as an elderly woman, who had not eaten in 24 hours and was thin as a rail and shaking. They gave her medicine for blood pressure and arthritis pain, and Farley slipped into her bag her personal stash of granola bars.

“Can’t feed one without feeding them all, but of course we had to nourish this woman!” she said.

Farley thought about the risks, such as imposing American health and cultural expectations on a short-term basis on the Haitians. And she was already quelling the urge to give handouts at random, an act that can create issues of unfairness for those who don’t receive gifts and does nothing to solve root social problems. She waited to give until she understood from a Haitian that what many of the youth need are pencils for school.

“I know to watch and channel the impulse to give into what we’re doing,” she said, referring to the clinic.

Farley, who teaches an online midwifery program through Philadelphia University, got into the medical field because she wanted to help people, she said last week. And she has always taught in order to bring other women into the midwifery field. Midwives for Haiti began as a school to train Haitian nurses with the skills for safe childbirthing, and then when the earthquake hit, the organization went into triage mode and used its volunteers for whatever medical help was needed, Farley said.

The cost of the one-week trip was $2,000 plus one lost week of work, said Farley. The Yellow Springs Presbyterian sock fundraiser paid for half of her travel expenses, and she solicited extra donations from family and friends to help with the rest. Though it would be a hardship to return, Farley and several of the medical providers hope to sponsor Methanie Mémé, their Haitian translator, as a student through Midwives for Haiti. Mémé showed great interest in the practice, said Farley, who hopes to improve in any way she can the dismal statistics in Haiti, where 76 percent of all births are attended by a non-qualified person.

She also hopes to stay connected to the cause of training medical caregivers in poor nations by starting a program at her university that sends students overseas for the service, experience and education. She visited the Becky DeWine School opened through donations collected by the Mike and Fran DeWine family and their supporters, and she knows that many other people across the U.S. are doing what they can to help a nation that is close by, but still so far from the standard of living Americans take for granted.

“It was a very poignant connection, and it was meaningful to go,” she said.