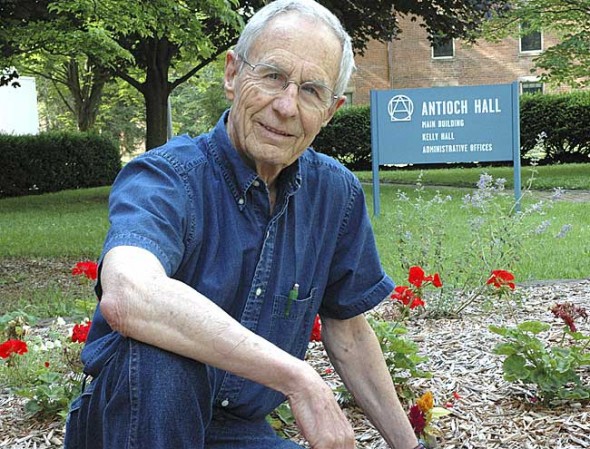 At the Antioch College alumni reunion, longtime faculty member Al Denman received the J.D. Dawson award, for his contributions to the college. (photo by Lauren Heaton)

Denman is another Mr. Antioch

Al Denman could never decide whether to describe himself as a wandering wonderer or a wondering wanderer. But he hasn’t strayed far from the Antioch College he calls home since he came to Yellow Springs in 1965. It was a lucky fit, he said this week, and one that worked so well that even after he retired as an emeritus faculty member in 1993, he couldn’t help but stay involved. That level of continuous engagement later made Denman “indistinguishable” from actual faculty members, according to college alumna Ellen Borgersen, who introduced him over the college’s reunion weekend as this year’s recipient of the J.D. Dawson Award for having made “significant contributions to Antioch College.”

Denman’s appointment at the college was a good match from the start. Hired as professor of law and religion as well as the college chaplain, Denman liked that he never received a job description. It wasn’t until several years into his tenure that he was driving former College President Arthur Morgan to visit his wife Lucy in a care center that he asked, by the way, why did secular Antioch College have a college pastor? Morgan replied that when he met Antioch’s former pastor Bishop Jones he thought that “students could use a man like him to find out about how to find their own philosophy of life,” Denman recounted during his acceptance speech on Saturday. “That was all the instruction I ever had from him.”

“I was a Presbyterian minister, but I didn’t think religion ought to in any way be a set of beliefs but rather something vaguer — attitudes and feelings,” he said.

Being free to explore the truth and help others do the same appealed to Denman, and he was thrilled to be on campus in an era of social experimentation and passion around civil rights and the war in Vietnam. Free thought spread into education, and the idea of the “free university” emerged at Antioch, where instead of taking courses students could get credit for simply engaging in the rich broth of the college environment. Denman appreciated the rigorous institutional testing Ruth Churchill devised to see which group, the “prescription students” or the free thinkers came out with greater knowledge. According to the tests, there was no discernible difference between the two educational methods, he said with a smile.

As a faculty member, Denman experimented on his own with courses such as “Jesus as a source of cultural revolution” and a Bible course taught by a visiting fundamentalist. In 1983 he started the Friday forums, a weekly event aimed at bringing diverse perspectives to an issue, where he advocated giving respectful audience to the Grand Wizard of the Ku Klux Klan. The event did not occur due to opposition from the campus community.

Of course the experimental movement on campus had its detractors, and the campus did produce its fair share of what Denman called “frothy” students and those who were “gaming the game.” But Denman maintained his commitment to a college and community he felt ultimately encouraged people “to improve themselves, the institution and whatever portion of the world they could affect,” he said. “There was the opportunity of play but a high expectation that something good and worthwhile would come out of it.”

Denman feels that Antioch College ended up being a much better place for him than up in the pulpit because, he said, “there was no truth I was proclaiming,” but rather as a chaplain he could “encourage everybody to look at the big issues of life and wonder about them,” he said.

And his engagement with the college continues in his newest role to lead, with college alumna Jennifer Berman, a task force to help the college in its new era to create community and community governance processes.

In her introduction on Saturday, Borgersen likened Denman to J.D. Dawson, both of whom could aptly be called by Dawson’s nickname, “Mr. Antioch.” Denman knows from the moment he and his family came to Yellow Springs, that he couldn’t be anything else.

“I can’t keep away from the place, just like I can’t stop from going home,” he said.