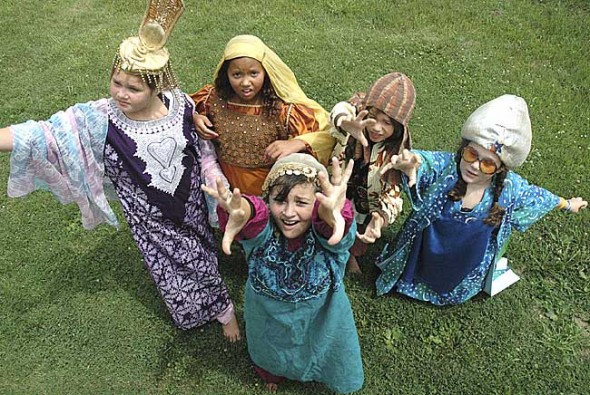 The YSKP players from Oceans of Notions (Lakes of Mistakes) reached for their dreams this week during a rehearsal at the Presbyterian Church. They are, from back left, Annabel Welsch, Nia Stewart, Jonah Trilliana, McKenna Banaszak-Moore, and in front, Lorien Chavez.

YS Kids Playhouse ‘Oceans’ moves to the power of dreams

At a YS Kids Playhouse rehearsal last week in the Presbyterian Church, the cast members of the newest show, Oceans of Notions (Lakes of Mistakes), were laughing hysterically as they ran through the passageways of Westminster Hall. It was another sweltering afternoon in July, and three hours and 35 minutes into the rehearsal, the pack of 14 9- to 12-year olds was still wiggling and fidgeting with excitement. The bird was flapping, the carp were carping, the characters were delivering their lines with crisp attitude, and the whole scene could be summed up in one word: joy.

For an actor, finding the joy of the transformation on stage is the goal, according to visiting director Lenard Petit. The audience is interested in seeing the pleasure of an actor in the creative moment. And the physicality of emotion, in the way a contracted body moving downward communicates despair or an upward, outstretched body communicates happiness, is the point of entry into the school of acting that Petit teaches all over the world.

Of course Petit has modified the way he articulates his techniques to the younger actors at YSKP. He is accustomed to teaching experienced adult actors at the Michael Chekhov Acting Studio he founded in New York City 20 years ago, based on the early 20th century work of Russian-American director Michael Chekhov. Like his predecessor, Petit helps actors to engage the creativity of the unconscious through the physical motion of the body.

Though Petit is an internationally recognized and sought-after teacher of the Chekhov method, he agreed to come to YSKP for part of the summer because of a connection. He and YSKP director John Fleming roomed together in mime school in the 1970s and started an acting company in New Orleans, where John met his wife, Louise Smith. Now the three are working together again, with Smith as the playwright.

Oceans of Notions (Lakes of Mistakes) is a story about an inventor named Babak, played by Jonah Trilliana, who one day runs out of ideas. He goes with his daughter, Darya, played by Nia Stewart, and their guide, Aw Gali, played by McKenna Banaszak-Moore, in search of the Ocean of Notions, the source of ideas. On the way they get caught in the Lakes of Mistakes, the World of Whatever, and the Haziness of Laziness, and fall into other misadventures with characters such as Thoughts and Dreams, eventually learning about the power of the imagination.

A play about the loss of ideas fits with Petit’s technique, which argues that actors who subscribe to conventional method acting by personally taking on the roles they play, will eventually lose not only ideas but possibly their souls too. Students of Chekhov, and now Petit, come to acting through their imagination and by extension, the body. And here is where Petit connects to the children. Using a stick, a veil and a ball, he demonstrates how actors can immitate the qualities of each object to  produce the theatrical effect of thinking, feeling and willing, respectively. To portray thinking, they stand tall and still, like a stick; for feeling, they sway and flow like a veil; and for willing, they engage in the large bouncing and rolling motions of a ball.

Oceans of Notions (Lakes of Mistakes) is YSKP’s second play of the summer series, and it includes the choreography of Jill Becker, costumes by Ayn Wood, and the expertise of musical director Gary Arnold. The show will be performed under a big top tent at Young’s Jersey Dairy from Wednesday to Saturday, July 28 to Aug. 7. All shows are at 7 p.m. Tickets are $7, except for Thursdays, when they are two for $10 at the door.