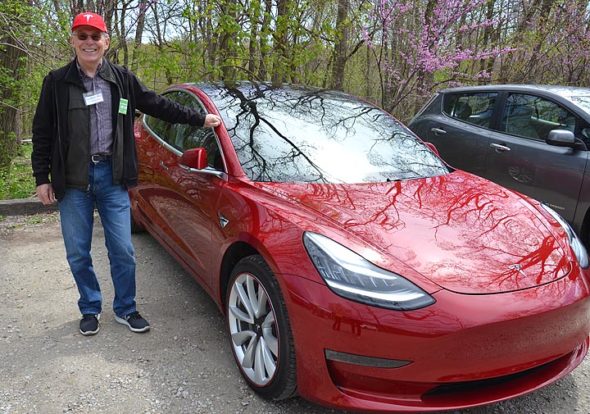 Tim Benford of Oakwood led his group of electric vehicle enthusiasts in a “ride and drive” event at the Glen Helen Ecology Institute’s Earth Day celebration on Saturday, April 27. (Photo By Megan Bachman)

Tim Benford of Oakwood led his group of electric vehicle enthusiasts in a “ride and drive” event at the Glen Helen Ecology Institute’s Earth Day celebration on Saturday, April 27. A few members of the 334-strong Drive Electric Dayton group showcased a variety of EV models on Saturday, including the Tesla Model 3 Performance and a Mitsubishi Outlander PHEV. Benford is a proud owner of a Tesla 3, for which he waited exactly 2 years, 1 month and 50 minutes. The car can go from 0 to 145 miles per hour in one gear and 325 miles before a recharge, Benford said. Benford appreciates the high tech vehicle, which may soon be entirely self-driving, and its lower carbon footprint and fuel costs (which he estimates at $0.23 per mile). Now, through the group he formed, Drive Electric Dayton, Benford wants to share his experience. “I do believe we are messing up the planet and I want to encourage people to go electric,” he said. “The more the merrier.” Antioch student Rachel Isaacson was an enthusiastic rider. “It’s my dream car,” she said. Entering the vehicle, she asked Benford one excitedly: “So, is it going to drive us?”