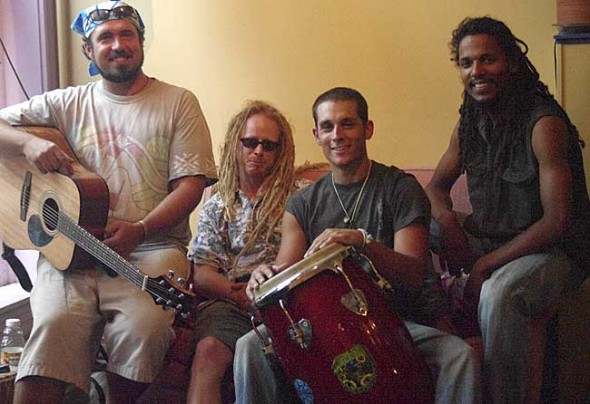 The Yellow Springs band Soul Rebels is one of eight local musical groups that will perform at the HighPoint Music Festival at Zane Shawnee Caverns in Bellefontaine this weekend, Aug. 20 to Aug. 22. Shown above are band members Jonathan Stillwell, Ari Harker, Scott Abla and Jonny Dredlocks. The festival is one of two music festivals organized by Mindy and Patrick Harney, owners of Brother Bear’s Coffee House. The second festival, Werk Out, will take place in September at the same location. (Photo by Sehvilla Mann)

Coffee, hula hoops and transformation are all on the agenda for two upcoming music festivals in Bellefontaine, organized by the local promotion company Funky Bean Productions and featuring local musicians.

Patrick “Brother Bear” and Mindy Harney, owners of Brother Bear’s Coffee House on Dayton Street, and partners Tom Blessing and Lara Bauer constitute Funky Bean Productions. The group used to hold music events at the Harney farm (also called Funky Bean) just north of town on U.S. Route 68, but when the number of attendees grew to 500, they realized they needed a bigger venue, said Mindy Harney in a recent interview.

That venue, Zane Shawnee Caverns in Bellefontaine, allows the group to bring music to bigger crowds, and their first two “full weekend affairs,” will launch this weekend, with the HighPoint Music Festival. The Werk Out festival will take place in September.

Both festivals will be held at the caverns at 7092 St. Rt. 540 in Bellefontaine. Camping is available, and the facilities include flush toilets and men’s and women’s showers. All ages are welcome at both festivals; the Harneys said that HighPoint would be particularly kid-friendly. HighPoint, which will feature a “jam band scene” of roots music, bluegrass and rock, begins at noon on Friday, Aug. 20, and ends at noon Sunday, Aug. 22. Admission is $35 in advance and $45 at the gate (no extra fee for camping); a Saturday-only pass created with Yellow Springers in mind costs $35.

“We’ve paired up established artists with younger artists [because] some of the bands are teenagersčphenomenally talented, but still new to the scene. I’m excited about that,” said Mindy Harney.

The organizers didn’t have any trouble coming up with talent for the festival. “The difficult part was narrowing it down, really,” Harney said.

The Werk Out will feature Dayton band The Werks, with music offerings of a more electronic bent. That event begins at noon Sept. 10 and ends forty-eight hours later on Sept. 12; admission is $47.50 including camping. Vendors at both events will sell food, arts and crafts, and make-your-own tie-dye.

“And of course Brother Bear’s coffee will be there,” said Mindy Harney. A portion of the proceeds from the first festival will benefit the AIDS Resource Center of Dayton, while some proceeds from the Werk Out will be donated to the American Institute for Cancer Research.

It matters to Patrick and Mindy Harney not just that people show up, but that they take something special away from the experience of attending one of Funky Bean’s events, they said. Mindy Harney said she wanted to share with others the sense of revelation she got at the first music festival she attended in her early 20s.

“All the love and kindness that everybody showed to everybody really blew my mind,” she said. “It started me on the journey that I’m on now.”

According to Patrick Harney, they’ve previously had good luck bringing in people new to the scene.

“They’ve felt welcomed, at home, like they finally found what they’ve been looking for their whole life,” he said. Funky Bean aims to offer more at its events than “a venue where [after the show] you leave and go home…and you’re paying 10 dollars for a good beer,” which he described as “the average concert-goer’s experience.”

“We like to provide the concert-goer [with] a well-rounded experience…music and art, love, meeting people,” Mindy Harney said.

Five hundred attendees would make HighPoint a success, said Mindy Harney, and they expect between 2,000 and 5,000 to attend the Werk Out, which features more nationally known groups.

“That’s going to be insane,” said Harney, who also said Zane Shawnee Caverns could accommodate up to 10,000 concert-goers. “We’re hoping the payoff [to the hard work of organizing] is that a lot show up and feel like they’re changed,” she said.

Mindy Harney especially hopes villagers will attend, not least to support the budding local talent playing at HighPoint. “These kids, they need us, you know?” she said.

Those interested in a shuttle ride to the festival can call Mindy or Patrick Harney at Brother Bear’s Coffee House, 767-1514.