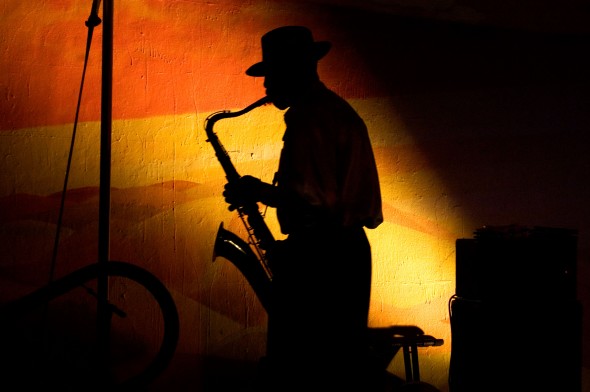 A silhouetted saxophonist wails into the night (photo by Aaron Zaremsky)

I’ve got the Blues

If you pick up any CD in your collection and trace a historic line back to its origins, chances are you’ll be in blues country. The Mississippi Delta, to be precise. This region that produced not a single noteworthy politician or scientist was the birthing ground for arguably the most influential cultural figures in history: the bluesmen. Robert Johnson, Charlie Patton, and really just a handful of soulful crooners who left their mark on virtually every piece of popular music that came after them. The blues runs deep in the blood of America.

The AACW Gospel, Blues, and Jazz Cultural Festival paid tribute to this iconic piece of American culture this past weekend at the Antioch Amphitheater. Trumpets blared, hips grooved and mouths devoured heaps of juicy bourbon chicken well into the night. I could hear the music from my house, which is far on the other side of town. The festival was definitely the place to be.

Faith Patterson is the benevolent matron behind the event. She helped to organize the AACW (African American Cross-Cultural Works) as a non-profit group that recognizes cultural heritage and celebrates cultural diversity. The AACW celebrates numerous cultural events throughout the year, but the Blues Fest is the one that gets the most toes tapping.