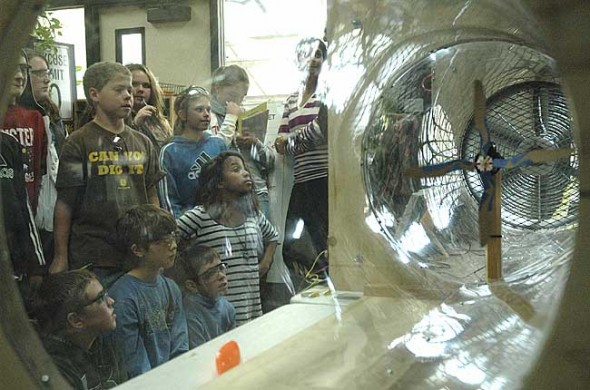 Seen through the inside of a homemade plastic wind tunnel, Mills Lawn sixth graders can view and measure how efficiently the tiny windmills they are making this week function to produce energy. Last week, Ms. Amin’s sixth-grade class experimented with scientist-in-residence Eric Lang and Dan Rudolf. The class will make a public presentation on Monday, Dec. 6, 6:30–7:30 p.m. at the school. (photo by Lauren Heaton)

In groups gathered around their model windmills last week, students discussed the probability that the tilt angle of the blades was steep enough that the wind would propel them without knocking them down completely. They tested their theories in the classroom wind tunnel and calculated the electrical power generated by the models they had created. Then they altered their designs based on the data to optimize the efficiency of their prototypes.

Though local scientist-in-residence Eric Lang is thinking about using this exercise for his graduate students at University of Dayton, this month it’s the sixth-grade students at Mills Lawn School who are benefiting from the implementation of the scientific method. The two-week unit on wind energy was designed by Lang, sixth-grade teacher Sarah Amin and longtime residency organizer Dan Rudolf.

Lang and Rudolf, both local engineers, are the first of several scientists who will bring hands-on problem-solving science and math lessons to Yellow Springs students this year. The wind energy unit at MLS is part of a $34,000 grant from the Dayton Science, Technology, Engineering and Math Hub the school is using this year to integrate more science, math and critical thinking skills into the curriculum.

According to MLS Principal Matt Housh, Waibel, the company that installed $815,000 of energy saving upgrades to district facilities, will present a multi-day course on the science and energy of building components. And the remainder of the grant will be used for field trips to the Dull wind farm, the Cincinnati Museum of Science, and for the pilot purchase of 30 iPhones with field investigation and other educational applications students can use to get excited about math and science, he said.

The wind unit is the first science residency in several years at Mills Lawn, and it was initiated by a team of teachers and administrators who are keen on revitalizing the science and math curricula in the school system. Rudolf began facilitating science residencies for Mills Lawn around 2000 and helped implement two or three each year, including units on lasers, archaeology, renewable energy and robotics. Rudolf is readily consumed by science projects himself, and though he donated his time and provided much of the materials, for him “the payback is people [educators] who are actually interested in it…the kids are always interested, but it’s when the teachers show interest” that a program develops.

In class last Thursday, sixth-grade student Augie Knemeyer exhibited an astute interest in using his calculations to make predictions about the performance of his team’s rotor. He and James Fulton predicted that their team’s rotor would “produce a decent amount of voltage” and that it would be “awesome.” Ready to test their prototype against the performance of Lang’s plastic rotor, that team installed the rotor into the clear plastic wind tube and switched on the fan. They were rapt, watching their little rotor start to spin slowly at first, and then gain speed. Though the calculations for the watts produced, .819 watts at a wind speed of 6,900 cubic feet per minute, did not beat Lang’s standard, the prototype did not fall off its axle after all, and the students congratulated each other with high-fives for a design well done.

Lang and Amin designed the wind project for maximum hands-on possibilities. The lesson will include calculating the power generated at variable rates of wind speed for various durations, which applies directly to a real windmill that functions under variable weather conditions to produce electricity, Lang said.