BLOG – The Yellow Spring… or is it? 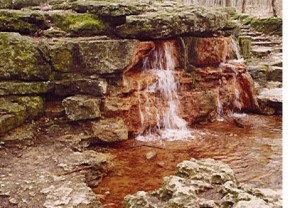 The Yellow Spring... or is it?

When I first saw the Yellow Spring, my initial thought was, “That’s not yellow.” I mean, not really. It’s yellowish, ok, but if I were to see it without knowing its name, I certainly wouldn’t call it yellow.

Because my inquiring mind wants to know, I’ve occasionally mentioned this to people. It turns out, as I suspected, that the name of our beloved village is actually the result of a slight mistranslation.

We all know about the Yellow Spring, a natural spring in Glen Helen that is rich in iron ore, staining the rocks and ochre earth with its yellow-like color. We all know that early draws to the spring were to do with its alleged healing properties, and that in the 19th century spas and resorts were built along and nearby.

Apparently, the indigenous Shawnee, who inhabited our village before it was settled by white people, called the spring what is perhaps more accurately translated as “golden waters”. In English this became Yellow Springs and we’ve never looked back.

I became curious about other waters that might have similar compositions, and what they might be named.

I found two other places that call the water yellow.

• Yellow Springs, Pennsylvania is an historic village and ghost town in Chester County that runs over an iron-rich spring. As in our Yellow Spring, indigenous Lenape peoples were in the area for thousands of years. Their white folks made it into a spa village well before ours, though, in the 18th century. Alternate names for this spring have been Iron Springs and Sulphur Spring.

• Yellow Spring (yes, that’s singular), West Virginia is an unincorporated community in Hampshire County. It is named after the spring on the Cacapon River. That’s all the information I could find on that.

I thought, perhaps there are places which named the waters after other colors on the first half of the spectrum, which are just as valid labels as yellow.

• Red Springs, North Carolina is a town in Robeson and Hoke counties. According to their web site, it is named for the iron- and sulphur-rich springs that were “known for their beneficial qualities long before the town came into being” (by whom it doesn’t say) and it, too, became a bit of a spa mecca.

• Red Springs, Wisconsin is a town in Shawano County. No other information found.

• Orange Springs, Florida is an unincorporated community in Marion County. No other information found on there, either, except that there is a spring-fed lake.

We might have easily been called Red Springs. Our history and stereotype as a bunch of lefty commies make that an easy joke.

Many thanks to Scott Sanders of Antiochiana.