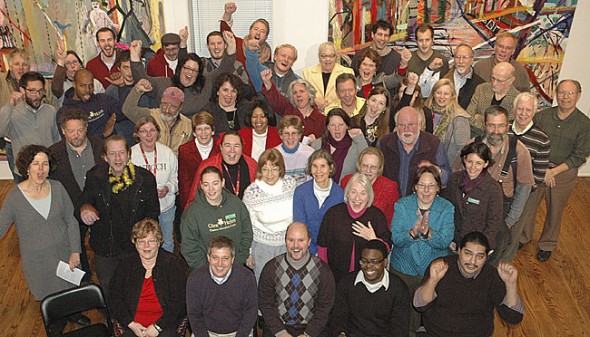 Departing Antioch College Interim President Matthew Derr was humbled by an outpouring of support from staff and supporters at a reception held in his honor last Thursday.

“I am more invigorated by this today than I ever was — I have enjoyed this,” he said in an interview last week. “I’ve viewed my job as setting the platform for what will come next — now it’s up to Mark.”

At a college reception for Derr last week, college staff praised him for his patience, unswerving leadership and unflagging optimism in leading the revived institution in its first year as an independent college.

“It was his compassion to listen to all sides and make creative informed decisions,” that made Derr successful, according to Antioch’s chief financial officer Tom Brookey. “And he had a great vision for the college.”

Derr was also honored for his role in alumni negotiations to purchase the college from Antioch University, which culminated in a ceremony last fall in which Derr was handed the keys to the college.

To Derr, that moment was the most defining of his time at Antioch. Despite taking place in the fall, Derr remembers the event, which followed months of tense, behind-the-scenes negotiations, as being like a bright, sunny spring day.

“That was the key moment — it felt like a new and very exciting time,” Derr said.

Derr will continue to help Antioch gain accreditation and develop fundraising strategies from his new position at the Great Lakes College Association in Ann Arbor, Mich., where he will begin a two-year visiting fellowship. He will also apply to a higher education PhD program at the University of Michigan. But, he said, he is grateful for what was an unusual opportunity to develop a compelling educational model after the college was shut down by Antioch University in 2008.

“I would’ve avoided at all cost the calamity but [the closure] provided an unusual opportunity — institutions don’t get that opportunity,” Derr said. “I don’t know if what I’ll do in my professional life will be as exciting.”

In October, Derr received the Council for Advancement and Support of Education’s Executive Leadership Award, given annually to an education executive in the six-state district for his efforts saving the college from permanent closure and modeling outstanding advancement work, according to award administrator Teresa Exline in a statement.

Derr started working for the college in summer 2007 after he sent an e-mail to the alumni board offering to help with fundraising. With a fitting background in education and advancement, Derr began as a volunteer before leaving his job as vice-president of advancement at the Boston Conservatory to work full-time at the college, first as chief transition officer and later as interim president, a position he held for 12 months. In that time, the college went from having no electricity or gas service to over 45 employees, millions of dollars in donations and a plan to reopen to students next fall.

It was his persistence, patience, diplomacy and passion for the Antioch model, Derr said, which helped him successfully negotiate the alumni’s purchase of the college and, over the last year, begin to rebuild the college’s programs, curriculum and campus.

“One thing that proved to be important was the willingness to make difficult choices and the patience to see the outcome,” Derr said. “I have seen myself as a facilitator to negotiate and create the prospect for a future we can all be proud of.”

At the reception, held last Thursday at Herndon Gallery in South Hall, Derr was commended by college staff for everything from his e-mail responsiveness and bowties to his hands-on style and loyalty to his employees.

“He knew this place like the back of his hand,” said communication director Gariot Louima. “It wasn’t just a business to him — it was a place of love and his employees felt that.”

“He was loyal to the employees,” Brookey said. “He has a very caring attitude and he isn’t a reactionary person —he would think before he responded.”

Having secured the campus and solidified alumni support, Derr said he is leaving Roosevelt in a good position to continue the college’s revival. Derr is not just hopeful that the college’s reopening will be successful, but certain. Derr also said he looks forward to Roosevelt’s tenure as president.

“I feel good about handing off the presidency,” Derr said. “Mark is intense, smart, witty and I genuinely like him. I’m excited as an alum for him to represent the college.”

As he prepares for the next stage in his career, Derr reflected on his most prized accomplishment as the simple fact that the college continues to survive.

“I’m most proud of the fact that we’re here,” he said. “In any other context that would be glib, but that we were able to move the institution forward speaks to the skill and motivation of the Antioch community.”

A community reception honoring Derr will be in January or February.