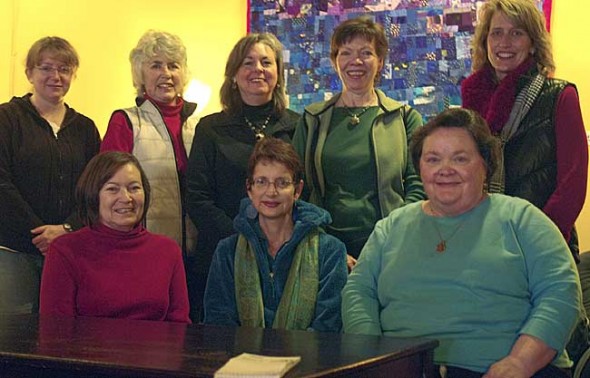 Local women who make a difference

They aren’t trying to create the biggest charity, or the most powerful, or the one with the most name recognition. Instead, the organizers of 100 Women Making a Difference in Greene County want to make a difference in the lives of community members by donating most effectively to the nonprofits who serve them.

Last year, Sandy McHugh of Yellow Springs read an article about the Montgomery County group 100 Dayton Women Who Care. It was “based on a concept of a giving circle,” explained McHugh in a recent interview, in which “people get together who have agreed to give.” The group kept overhead minimal and commitment time small by holding short quarterly meetings at which members chose a program or organization to which they would donate. McHugh, inspired, wanted to see if a similar group could be successful in Greene County. She set out to research the question with Rebecca Morgann of Beavercreek, a “philanthropist at heart” who “wanted to give money to organizations I’d heard of, but never had the time to check out.”

McHugh and Morgann used no advertising to attract interested women, instead relying on word of mouth. An initial planning meeting was attended by twelve women from communities including Beavercreek, Yellow Springs, Xenia and Jamestown — “we try to stay balanced around the county,” said McHugh. After that, she said, “All these women just kept showing up because friends had told friends.” Their first voting meeting in July, attended by around 43 women, raised $4,500 for the Family Violence Prevention Center in Xenia. They had grown to 57 members by the time of their most recent meeting in October, at which they raised $5,700 for Michael’s House, a Fairborn advocacy group which aids abused children.

Like the Dayton circle (now renamed 100+ Dayton Women Who Care), 100 Women Making a Difference in Greene County structures itself according to simple, clearly defined procedures. Members sign a commitment sheet agreeing to donate $100 at each of four quarterly meetings. At those meetings, which last no more than an hour, they select three names of charities from a hat and one member makes a pitch for each charity considered. They open the floor for 15 minutes of questions, then vote for the organization they most want to support, and everyone writes a check for that group.

The approach, as explained by Morgann and McHugh, boils down to a guiding principle: minimum overhead and time commitment equals maximum participation and maximum impact. With no bureaucracy to siphon off money from their donations, they can give enough to, as the group’s guidelines sheet puts it, “have a tremendous impact on the quality of life for our community…without the overhead of coffee, tea, nametags, table decorations, flowers, program booklets, worrying about who sits where, phone calls, silent auctions, etc.” Organizations have a tendency to absorb time.

“After meetings a lot of people like to hang out and chat,” said Morgann. “But we really want to keep this as simple as possible…the whole idea is no complication.”

That meetings take an hour or less makes a critical difference in participation in 100 Women Making a Difference, said McHugh and Morgann.

“A lot of younger women are working, they don’t have time to get involved…but they still want to help, and this gives them the opportunity,” said Morgann. “They can feel confident that the money is actually going to help.”

Any member can submit a program for consideration; many pitch groups to which they personally belong. To be eligible for funds, an organization must serve the residents of Greene County; no national charities are considered. 100 Women generally asks that a group have 501(c)(3) nonprofit status “except in emergencies,” said Morgann. “These are mostly businesswomen…and they want the [tax] deduction,” she said, which requires nonprofit status. 100 Women also avoids “controversial charities/nonprofits/causes,” according to its guidelines. A group must have “no political implications,” said Morgann; they don’t want to support groups that “somebody would not feel comfortable writing a check to.”

Members who pitch a group prepare to answer questions such as “What population does the organization serve and how many people receive services annually?” and “What are the current sources of funding for the organization?”

“They want to make sure they’re not supporting a big overhead,” said Morgann. “That’s the sort of thing that rings true with most of the questions” members ask about potential recipients.

Morgann and McHugh said they’ve discovered there are “a lot” of charitable groups in Greene County.

“We were amazed at the number of organizations,” said Morgann. “We’ve had two meetings, so that’s six organizations that we’ve heard about,” said McHugh. Member Susan Stiles of Miami Township, a founder of the Family Violence Prevention Center, has introduced the group to Sensible Shelter, Inc., or SSI, a nonprofit created by the Greene Metropolitan Housing Authority.

“It’s a wonderful asset-building program” for low-income families, said Stiles, who noted SSI’s savings-matching program and the counseling it provides to the community on financial planning topics.

Morgann and McHugh are quite taken with the enthusiastic response the group has received.

“One woman from Dayton wasn’t sure she could afford to come to both groups — so she writes a check (to 100 Women) when she can,” said McHugh. “I was impressed with that.” Some men have expressed interest in supporting the group as well. The interest is appreciated; the group will remain “100 Women,” but “we’ve encouraged the men to start their own” group, said Morgann.

Both organizers look forward to the group’s continued expansion as word about their work continues to spread. “I’m anxious to change our name to 100-Plus Women Making a Difference,” said Morgann. The conference room where they currently meet holds up to around 150 people. “It’s a wonderful facility…but we’re hoping to grow out of it. We’re interested in getting as many women as we can.”

Sehvilla Mann is a freelance writer for the News.

One Response to “Local women who make a difference”