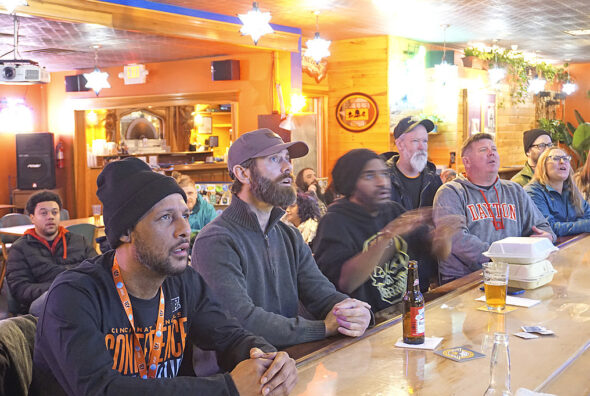 Not having a ball

On Sunday, Feb. 13, Super Bowl LVI offered brief hope to Cincinnati Bengals fans, as their team faced off against the Los Angeles Rams. After a historic season and a dramatically close game, however, the Bengals faltered with a score of 23–20.

The last time the Bengals won the AFC championship and appeared in the Super Bowl was 1988. All of Southwest Ohio was electric with excitement — especially Yellow Springs.

For the big game, villagers gathered en masse at the local watering holes, living rooms and parking lots. Shown below, local fans crowded around a TV set in front of HaHa Pizza — for what had turned into a weekly tailgating ritual. HaHa’s owner and proprietor B.J. Walters smoked and grilled meats a’plenty for his hungry spectators.