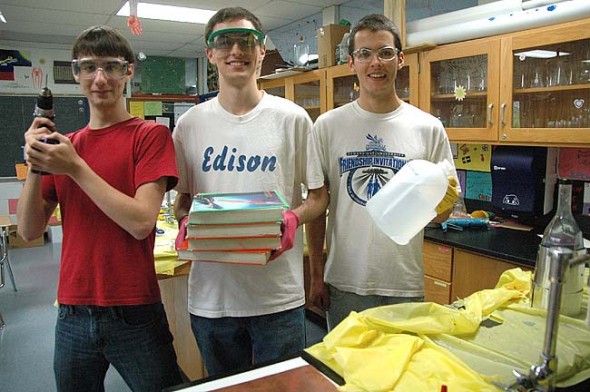 Yellow Springs High School announced recently that five of its students received National Merit recognition from their performance on the 2013 pre-SAT. Senior Francesca Brecha was recognized as a National Merit Semi-Finalist. Seniors Ben Ihrig, Dylan Boczar and Sam Crawford (pictured from left in chemistry safety gear) and Morgan Beard were recognized as National Merit Commended Students.
Ihrig, who attended school in several states around the country and spent the last two years at YSHS, likes math and hopes to study computers and computer science. After studying psychology with Mr. Day and later in PSEO courses at Wright State University, Boczar found his calling and hopes to pursue the discipline at Haverford College next year. Crawford also hopes to continue his education in the future.
Not pictured are Beard, who is in Belgium for the year on a Rotary scholarship, and Brecha, who is in the first of two years of an International Baccalaureate program at United World College in Arizona.