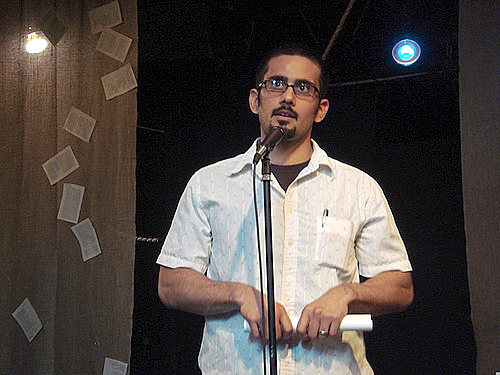 Writer and teacher Rafael Torch to speak at Antioch College.

Writer to read essays about his life with cancer

As part of the Antioch College fireside reading series, writer and teacher Rafael Torch will read from his recent creative nonfiction work on Sunday, Feb. 20, at 2 p.m. at the Coretta Scott King Center. His collection of raw personal essays about the realities of cancer treatment is titled Pacific Coast Time: A Recurrence of Days.

Torch, who graduated from Antioch in 2002, is a writer and high school literature teacher in Las Vegas. His work has been published in the Antioch Review, the Indiana Review, the North American Review, and the Crab Orchard Review, among other places. His story, “The Naming of Frank Torch,” won the Grand Prize from the literary journal Memoir (and). Torch’s MA thesis from the University of Chicago, The Garcia Boy: A Memoir, received numerous awards, including the Catherine Ham Memorial Award for Excellence in graduate work.

Rafael’s Torch’s gripping blog detailing his ongoing experiences with cancer is called “pacific coast time: cancer, las vegas, god, illumination, and a hint of existential dread.” The following is an excerpt from a February entry:

since i began this blog a year ago i’ve had cancer four times and i’ve beat it thus far. how much luck does a person have? is it even a matter of luck? i used to ask if it was fair, but now i know better — fair and luck have nothing to do with it. those are meaningless words…

jonah, i knew, was going to be a good student. i don’t quite remember his exact score, but i know he earned a high B on the test we had the first or second day of school. i never got to read his first essay. after he was diagnosed with cancer and i had gone to his house to see him before he flew to houston for treatment, he said he had his essay for me to grade. i told him that he didn’t need to worry about it, that he had other things much more important than salinger or holden’s dilemma to worry about now. but he was adamant. he had heard that those first essays were dismal, that i had graded hard. he wanted to see where he stood. i told him to email it to me if he wanted. i never got the email.

The fireside readings are sponsored by Antioch College Morgan Fellows Anne Bohlen and Jean Gregorek. The events highlight both established and emerging multi-ethnic writers, poets and memoirists who offer a variety of voices and fresh perspectives on contemporary life in North America. The events all take place at the Coretta Scott King Center for Cultural and Intellectual Freedom.