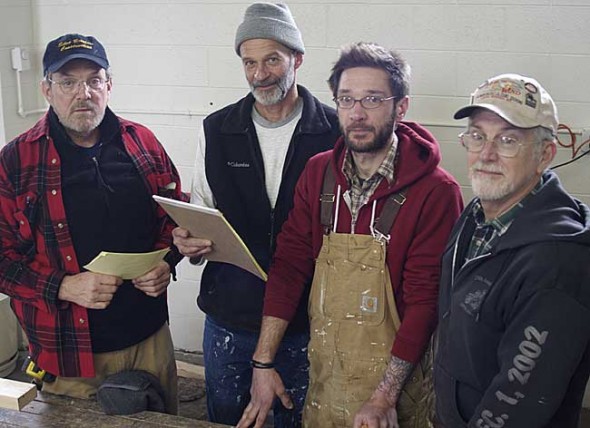 A group of volunteers from Yellow Springs and beyond has begun working to restore the Antioch College campus. Called VAMP — Volunteers for Antioch Maintenance Projects — the group recently turned the former Maples fire station into a central working space. Shown above are, from left, Jonathan Zimmerman, Jim Spangler, Joshua Miller and Jon Baker. (Photo by Sehvilla Mann)

Volunteers helping to restore Antioch College’s infrastructure have a new working base: the Maples fire station on Livermore Street, which once housed Antioch’s fire department and more recently was used for storage.

Members of Volunteers for Antioch Maintenance Projects, or VAMP — just one subset of the friends and alums of the college working to make its reopening possible — moved into the space recently. Jonathan Zimmerman, who graduated in 1970 and now lives in Los Angeles, has been working alongside fellow alum Jon Baker, a 1972 alum who resides in Chicago.

“It was Jon’s idea to find a space where we could set up a maintenance shop,” he said.

According to Miami Township Fire Rescue, the Antioch College Fire Department, housed in the Maples building, closed in 1996 as a result of “financial and personnel issues.” In the last few weeks the college cleared out the space, and VAMP has now transformed the high-ceilinged, light-filled concrete station into a workshop populated with table saws and ladders. One of their first improvements was updating the paint job from “’70s-industrial-ivory-coated-with-grime,” as Zimmerman described it, to a fresh bright white. On a recent Friday, saws screeched and tools clattered as a half dozen people got down to work after lunch, shouting questions to each other over the noise before leaving for other worksites.

Julian Sharp, a 2008 alum and now Antioch’s manager of volunteer work, said that in its interim year Antioch’s organizers had wanted to give alums the chance to become “more involved, more invested” and to “give more to the college.” The VAMP initiative was one outcome; it harnesses the capabilities of “people with a passion for building and maintenance,” said Sharp. The team has about half a dozen core members, and another 10 or so who sometimes help with specific projects; every month they tackle a one- to two-week assignment somewhere on campus. Some VAMPers, such as Zimmerman and Baker, travel considerable distances to participate.

Evelyn LeMers, a 1969 alum who lives in Yellow Springs, said Antioch doesn’t expect VAMP to carry out the heavy-duty remodeling that some spaces require. Still, there has been no shortage of projects for the group to take on.

“Some of these alums are really highly skilled — they can do anything,” she said.

Over a week in March last year when many colleges were on spring break, the group repainted and renovated Pennell House. Recently they’ve begun work on Birch House, which might become a dorm, and the McGregor building, which will house classrooms. They’ll address other buildings “as need be,” said Zimmerman.

Reluctant to pause their work even momentarily, recently the volunteers described their enthusiasm for helping to bring about Antioch’s rebirth.

“When I found out the college was going to resurrect itself, I got really excited,” said Zimmerman, who joined the maintenance effort in 2009. “When the college had reunions, they’d have a work party where alumni would come work on campus. When campus reopened, a group of alums said ‘we should continue that.’”

According to Baker, the country needs the type of education that Antioch can provide. A longtime building maintenance manager, “I’m doing work I know how to do,” he said.

Sharp said the college welcomes newcomers, “alumni or just friends of the college,” to join the volunteer effort.

“It’s just another great way to involve alumni in a way that’s more intentional and will help the college to meet its goals,” he said. Would-be VAMPers can e-mail Sharp at jsharp@antiochcollege.org.