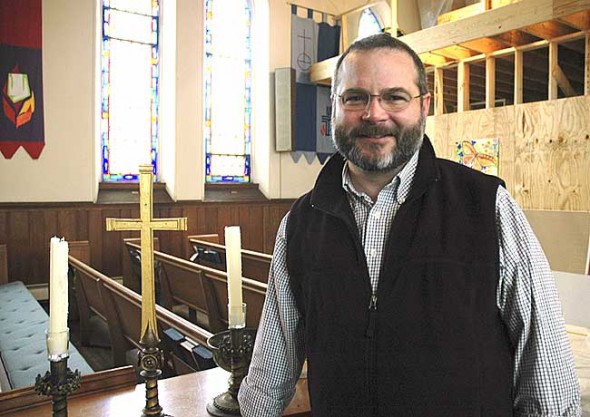 Joe Hinds was chosen as the First Presbyterian Church’s new part-time pastor in January. The church will welcome Hinds and celebrate its recent sanctuary renovations at a worship service on Sunday, March 27, at 10:30 a.m. (Photo by Megan Bachman)

Now preaching from the pulpit of the First Presbyterian church, new pastor Joe Hinds has a Southern accent and a passion for social justice. The church hired Hines as its part-time pastor after spending much of the last three years relying on fill-in pastors for its Sunday services.

“We hope to have some consistency now,” said church elder Ruth Bent, who served on the selection committee, in a recent interview. “We thought he was open and friendly and seemed to be very cheerful, forward-looking and liberal in his thinking. We thought he would be a good fit for Yellow Springs.”

A welcome reception for Hinds will be held following Sunday’s regular worship service, which starts at 10:30 a.m. on Sunday, March 27 and will feature special music from SoulStirrers. The church will also celebrate its refurbished sanctuary.

Hinds, a native of Vicksburg, Miss., comes to the Yellow Springs church from a recent pastoral position at the First Presbyterian Church of Sydney, where he spent the last two years. When Hinds was contacted by the church’s selection committee, he was pleased with the prospect of serving a congregation with values similar to his own.

“It was that the church was already about during social justice work,” Hinds said of his decision to take the position, which he began in January. “I very much like the idea that it’s an open congregation,” he added. “No matter what faith background, orientation or relationship preference…this church has a history and present tradition that anyone’s welcome.”

Hinds and his wife, Kazy, a Presbyterian minister in Piqua, came to the Dayton area after serving in churches in Syracuse, Long Island and South Carolina. They met while both attended the Columbus Theological Seminary in Decatur, Georgia.

After seminary, Joe and Kazy spent their first year of marriage in an intentional community in Atlanta called Open Door, which provided meals, showers, clothes and mailboxes for the homeless. The house’s 30 residents served the poor, who often numbered 150 people at breakfast. Those working at Open Door live in solidarity with the poor  — they can’t use a car or have a checkbook and survived on a $50 monthly stipend and bus tokens. Hinds described the experience as a formational part of his ministry.

“As much as we could experience life in that context, we did,” Hinds said. “It was not about bringing Christ to the poor people. It’s ‘we’re all in this together’ — that’s community to me.”

Hinds hopes to build community in his new position, expanding on the church’s already-strong engagement with Yellow Springs and finding ways for congregation members to connect, share their faith journeys and serve those less fortunate.

“Helping the ones in need sets the tone,” Hinds said. He also plans to start a discussion group called, “Faith on Tap,” where congregation members discuss their faith in a more relaxed setting — at a bar.

The First Presbyterian church, founded in 1855, has been a proponent for social justice throughout its history, taking a public stance on desegregation. Last year church member Ruth Myers helped to organize “Joined for Justice,” a network of Presbyterian and other churches in the Miami Valley working to reduce homelessness and alleviate financial distress in the Dayton area. And last fall the church was host to a traveling exhibit of liturgical stoles of gay, lesbian, bisexual and transgender people of faith to call attention to the plight of those who have been excluded from serving due to sexual orientation.

While the church has recently faced declining membership and rising facilities costs, a new pastor in the pulpit and a building renovation are the on-going causes for optimism.

“I’m really enjoying having him there, he’s so full of energy and good vibes,” said church elder Libby Rudolf. “He’s a very engaging, enthusiastic person and he’s hoping to really build the church into a more involved community and really bring people in.”

Rudolf helped to secure a grant from the Morgan Family Foundation to repair structural damage to the 150-year-old sanctuary and the 57-year-old Westminster Hall. The grant was given so the building could continue to host a variety of local groups like the Boy Scouts, Alcoholics Anonymous and Chamber Music Yellow Springs.

Last fall, the leaking roof was sealed, the exterior’s crumbling stone was re-mortared and the church’s 139-year-old bell was re-commissioned. The sanctuary’s west wall, damaged by water, is now being re-plastered, and earlier this month new stairs were installed at the building’s entrance. Rudolf said the church hopes to raise the $15,000 needed to renovate the west wall’s large green stained-glass windows, plus additional funds to weatherize the building to save on fuel costs.

Hinds was also attracted to the church because of its role as a community center.

“I love the location of the church in connection with the community and to see how the church is used, when so many churches are empty during the week,” Hinds said. “I think it is a real gift we have those relationships.”

Hinds worked for American Airlines, various travel agencies, a deli pizza company and a bank before deciding on a career in ministry while volunteering as a youth minister at his church in Birmingham, Ala., where he went to college for a year. He enjoyed organizing youth activities and leading worship and was inspired to go back to school to finish his undergraduate degree in history before getting his master’s in theology. He followed in the footsteps of his two grandfathers, who were also ministers.

“It was decent, honorable work — working as an investment analyst,” Hinds said. “But I felt I wanted to express creativity.” A love of music, which Hinds said is critical as an expression of praise, also pushed him toward the ministry.

Hinds was especially pleased to find what he described as “fabulous” music at the church, which is under the direction of James Johnston and features traditional hymns, gospel music, quartets and more.

Church elder Bent said the congregation has already embraced the new pastor, and she encourages people in the community to come meet and listen to Hinds at a Sunday service. She was impressed when, on his first day on the job, he went to visit an ailing church member in the hospital. Rudolf is pleased that Hinds finally put the church on Facebook.

“He seemed to be very well received by the congregation,” Bent said. “He’s informal but serious and he seems to have a very optimistic nature. Come and hear him, we’ll be glad to see you.”

Hinds said those attending his service will find an anecdotal preaching style — filled with his own experiences that are examples of what not to do. He said he hopes to build the congregation and, if finances permit, become a full-time pastor.

“I think the biggest thing they’ve been needing is a consistent pastoral leadership,” Hinds said. “The church is taking a risk in [hiring me], but I believe it is worth a shot.”