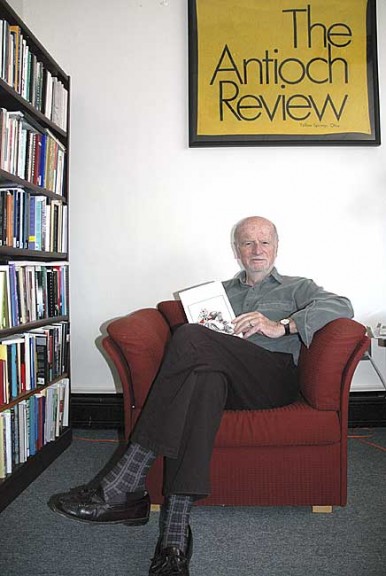 Bob Fogarty is editor of the small but mighty Antioch Review, finalist for a third year in a row for the sought-after ‘Ellie’ award. (Photo by Diane Chiddister)

Each edition of The Antioch Review begins the same way. Editor Bob Fogarty sits in the rust-colored chair in his office, picks up a submitted essay, and begins reading. He follows this process through each of the 1,200 essays submitted annually, picking the best ones to publish. And the best ones are those that make him want to read more.

“If the author can make me turn the page, I’m soon transported to the world that the writer created. Then I’m not reading anymore, but participating in something new,” Fogarty said.

Each day Fogarty reads, and in the office next door, his assistant, Muriel Keyes, handles business matters. The Antioch Review is just the two of them, plus some volunteers.

Small, perhaps, but mighty. For the third year in a row, the tiny journal finds itself up against the most prestigious magazines in the country — The New Yorker, The Paris Review, The American Scholar — as a finalist for an “Ellie,” the most sought-after prize in the world of magazine publishing. Fogarty will travel to New York City in early May for the awards presentation, sponsored by the American Society of Magazine editors.

With a circulation of 3,000, the Review is by far the smallest of the magazines up for the award. It also has the distinction of being the only one funded by a college without students.

“The fact that we’re being supported by a college that doesn’t exist is remarkable,” Fogarty said.

What does matter, rather than size, is quality. Fogarty feels fortunate to have no pressure to print what sells, as do commercial magazines. Rather, he said, his only standard is aesthetic.

Writers often ask what sort of material he’s looking for, Fogarty said, and his response is, “I’m looking for your best writing.”

And while Fogarty has no preference regarding an essay’s subject, he wants to see it approached in a fresh and compelling way.

“I want people who read the magazine to be surprised,” he said.

The magazine’s range is eclectic. For in the spring 2011 issue just coming out, essay subjects include the closing of a dime store in a small town, working for the Census Bureau, and riding on segregated trains in the 1940s as a black man in a turban and being perceived as a “foreigner.”

And a submission about the death of the writer’s father in a motorcycle accident, “The Physics of Speed,” by William Giraldi, was the nominated essay that led to the magazine being a finalist in this year’s awards. The Review was also nominated as a finalist last year for fiction, and the year before that, for essay and criticism.

While Fogarty makes all final decisions at the magazine, he relies on 14 volunteers to read fiction submissions — the magazine receives 4,000 to 5,000 a year. Each year he advertises in the Yellow Springs News for readers, who he describes as, simply, people who love to read. These volunteers read the “slush pile” or un-agented submissions, then pass on the best to him.

And poet Judith Hall is the magazine’s poetry editor, who selects 16 pages of poetry for each issue.

Along with the magazine awards, the Review is gearing up to celebrate its 70th birthday later this year, making it one of the country’s oldest continuously publishing literary magazines. It was launched as a journal of progressive politics in 1941 by a group of Antioch College faculty members, and early issues included such essays as “The Women Problem,” and “Married Women Workers in the War.”

Over the years the journal shifted its emphasis away from liberal politics and toward more fiction and poetry. Fogarty, history professor at the college, became editor in 1977.

Editing a literary journal and teaching history were life paths that Fogarty might not have predicted for himself as a child, the son of two immigrants from Ireland. His mother was a maid and his father a dock worker in Brooklyn when his father realized a lifelong dream and bought a neighborhood bar. The youngest of eight children, Fogarty grew up in the bar, a place where he may have first developed a taste for the offbeat that has followed him to the magazine.

“It was a benign place, a comfortable place,” he said of the neighborhood bar. “And there were some interesting characters there.”

Although his parents were working class, they believed in the power of education, Fogarty said. Consequently, three of his brothers grew up to be lawyers, and he became a college professor. Since graduate school, Fogarty has specialized in learning and teaching about utopian communities, including the Owenites who lived in the Glen in the early 1800s, and the Water Cure community that came to the Glen later in that century.

His lifelong interest in utopias is linked to his interest in “solving intellectual puzzles,” Fogarty said, especially those involving unusual belief systems.

“I’m interested in the question of why do people believe things that might seem outrageous to others,” he said.

While Fogarty retired from teaching several years ago, he did not retire from being intellectually curious. So he comes to work each day to sit in his chair and read, looking for essays that transport him into the imagination of the writer. And when he finds those works and publishes them, he launches them out into the world, showing that a tiny journal can have an impact that’s not small at all.