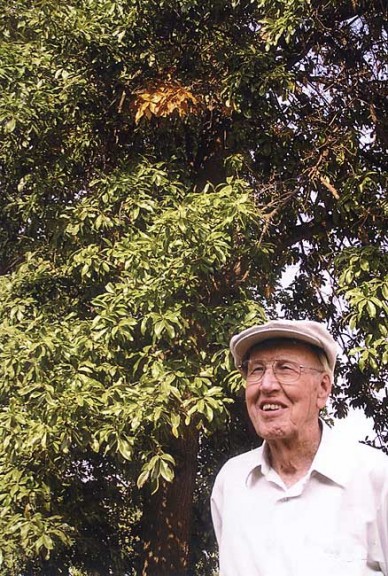 At age 96, Lloyd Kennedy is still planting trees and serving as inspiration for others on the Yellow Springs Tree Committee. The group has planted 2,000 trees in the village since it formed in the early 1980s. (Submitted photo)

Lloyd Kennedy wants to give credit where credit is due. For instance, he makes clear that he was not the one who floated the idea, almost three decades ago, of organizing a volunteer group to plant trees in the village. Rather, the idea came from several volunteers, organized by longtime Glen Helen Director Ralph Ramey to honor longtime Yellow Springs News editor Keith Howard by planting trees at Mills Lawn.

While Kennedy had thought of the idea, he’d kept quiet. He wasn’t looking for work.

And it was former local businessman Lew Bonadies, not Kennedy, who thought up lining downtown streets with the Bradford pears that produce fluffy white blossoms in the spring, Kennedy said.

However, according to the president of the Yellow Springs Tree Committee, what Kennedy has done for almost 30 years is act as the guiding force of that group, which has planted about 2,000 trees in the village.

“He’s the heart and soul of the Tree Committee, and he knows every tree in this town,” said Anna Bellisari. “He’s an inspiration to the rest of us.”

As the nation celebrates the tree with its annual Arbor Day event at the end of April, it’s a good time to also honor Kennedy, the man who more than any other has contributed to creating a village of exceptional natural beauty.

Said to have personally had a spade in the hole of each of the group’s first 500 plantings, Kennedy is, at age 96, still planting trees, as well as mulching and watering them. His doctor says he has to be careful, Kennedy says, because if he falls and breaks a hip, it’s all over. In fact, he allows that he does fall sometimes, but he hasn’t broken anything so far.

When will he stop?

“It’s hard to quit,” he said in a recent interview. “I’ll quit when I have to — and meanwhile, I’ll be careful.”

But even when he has to stop digging and mulching, he can still drive around town and “find things to do” for the committee, Kennedy said, as well as handle phone calls and help with the newsletter.

Since that first organized planting effort at Mills Lawn, the group has planted about 2,000 trees in the village. The plantings include a crabapple collection in Bill Duncan Park, street trees downtown and where desired by residents, a row along the south side of Dayton Street near East Enon Road, and another row around the corner on the east side of East Enon, made possible by a grant from Vernay Laboratories.

The tree committee also planted many trees in a new park the group created from a former small farmyard at the corner of Dayton Street and East Enon Road, creating an attractive entrance to the village, plus many other trees at the high school.

The group planted a row of flowering pear and crabapples at Gaunt Park, along with many other trees, including evergreens, at the park. Group members also planted all of the young trees on the bike trail from downtown south to a little beyond the Riding Centre.

Kennedy didn’t expect to spend 30 years following his retirement as a planter of trees, he said. Before that, he worked in the nursery industry as an inspection supervisor for plant pest control in western Ohio. With a bachelors and masters in agronomy, he’d originally come to Yellow Springs in 1938 to help with a hybrid seed project then run by Antioch College. When the college sold its seed business, Kennedy moved on to his lengthy career in the horticultural field.

It wasn’t until the tree planting at Mills Lawn in 1976 that Kennedy developed a passion for trees.

The most obvious benefit is beauty. The dogwood, for instance, is a favorite.

“It’s a wonderful little tree,” Kennedy said of the tree’s delicate white or pink spring blossoms, followed by summer’s red berries and color in the fall.

And then there’s those Bradford pears, lining downtown with billowy white petals that announce spring in April, produce shiny green leaves in summer and transform into red and yellow explosions in fall.

And he’s partial to shade trees as well, such as the American beech he grew up with in rural Indiana.

“As a kid I used to climb them,” he said of his parents’ 16 acres of woods. “They’re a great tree for climbing and carving your initials.”

According to the Ohio State University School of the Environment and Natural Resources, the benefits of trees can also be quantified in dollars. After the tree committee completed a survey of local trees in 2007, the group received an analysis of the trees’ economic benefits to Yellow Springs, according to Bellisari.

According to the OSU analysis, each tree contributes about $98 annually to the community, Bellisari said. That includes energy savings, through shading buildings and reducing wind speed, of about $17,000 annually in electricity and $31,000 in natural gas, along with thousands saved from the trees’ reduction of stormwater run-off. Trees also remove carbon dioxide from the air, and would be worth about $5,000 yearly in carbon credits, if the Village were receiving such credits. The university also estimated that the trees’ aesthetic value averages about $43,000 annually.

“We feel kind of proud,” Bellisari said of the analysis. “Our work is contributing to the community both aesthetically and financially.”

What’s especially unusual, she said, is that the Village spends nothing on trees, as the effort is totally volunteer.

Not surprisingly, Kennedy is lavish in his praise of tree committee members both past and present. He had great help from the late Tom Ayrsman, Alton Brisbane and John McConville, and currently counts himself lucky to have the expertise of landscape architect Roger Beal and the dedicated leadership and labor of Dan Beverly.

However, more hands are needed, and the committee is especially interested in recruiting younger members, Bellisari said.

It’s true that finding new spots for trees is becoming more challenging in Yellow Springs, given the number of trees planted in the past 30 years, Kennedy said. And just keeping up with learning about each species and its needs can be consuming, he said. Just in the Ellis Park arboretum alone, there are 115 different varieties.

“You can go crazy working on trees,” Kennedy said, shaking his head. “You can spend your life learning about that many trees.”