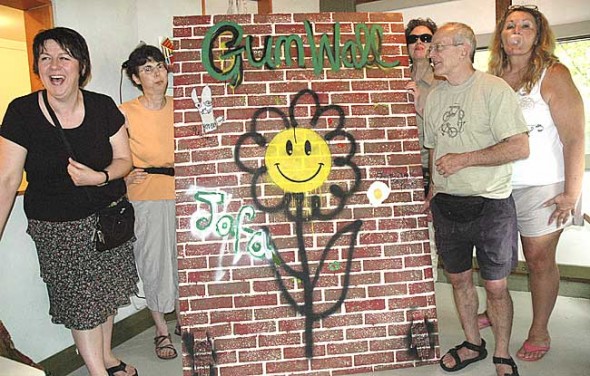 Several local arts supporters got in the spirit last Sunday at Chew 4 Art, which launched the Traveling Gum Wall, a collaboration of the Yellow Springs Arts Council and the JafaGirls. The public is invited to help decorate the gum wall this Saturday during the Street Fair at the Arts Council booth in the Art Park at 100 Corry Street, which is a fund-raiser for the arts group. Shown above are, at left, JafaGirls Corrine Bayraktaroglu and Nancy Mellon and at right, Arts Council coordinator Carole Braun, Tom Osborne and award-winning bubble-blower Lori Tuttle. (Photo by Diane Chiddister)

Sticky, off-the-wall art on a wall

You can call it art to chew on, or art that’s already been chewed. Whatever you call it, the Traveling Gum Wall is the most recent offbeat community art project by the village’s own Jafagirls, in collaboration with the Yellow Springs Arts Council.

Villagers are invited to help launch the Traveling Gum Wall this Saturday during Street Fair at the Arts Council booth at the Art Park at 100 Corry Street. Gum will be available for sale, with proceeds going to the Arts Council. Participants will first chew for their desired state of stickiness, then smush their gum on the wall in whatever shape and place they prefer. After, they’ll sign their name to the back of the wall.

And to celebrate the event, a Gum Ball (participants are invited to wear a gum-wrapper dress) will be held at a later date.

The idea of a Gum Wall isn’t new, the JafaGirls (Corrine Bayraktaroglu is Mellon’s partner in crime) said in a recent interview. There are well-known tourist destination gum walls in Seattle, San Luis Obispo, Ca., Ann Arbor, Mich., and Greenville, Ohio, among other places. Most often, the walls begin as graffiti walls in alleys that are then covered in gum to take on a new, more textured look.

“Alleyways tend to be ugly,” Bayraktaroglu said. “But with these walls you walk into an alley filled with colors and shapes.”

So the Jafagirls have been thinking about covering a wall with gum for a while, they said, but one thing held them back — what if the whole concept got out of hand?

“The Arts Council does not promote the random sticking of gum all over town,” Bayraktaroglu said.

Then came an inspiration. What about a traveling gum wall, one that could be set up and taken down? One that wouldn’t encourage random gum-sticking, but would instead provide a specific and movable place for those who wish to stick their gum where it really doesn’t belong?

“It was a way of containing it,” Mellon said.

So the artists began with a 4-ft. by 6-ft. piece of plywood, then painted the plywood to look (and feel) like a brick wall. Bayraktaroglu’s husband crafted a stand for the wall, and the whole thing is just the right size to stick in a van. Thus, the Traveling Gum Wall — the world’s first Traveling Gum Wall, the artists believe — came into being.

If last Sunday’s Chew In for Art is any indication, creating a gum wall does indeed appeal to the silly and childlike part of adults, and makes children positively gleeful. Held at the Arts Council Xenia Avenue gallery, the afternoon event prompted adults to stick wads of gum in their mouth, chew vigorously, then create thoughtful gum flowers or symbols, while the kids simply enthusiastically chewed and stuck their sticky wad on the wall, over and over again.

Bayraktaroglu isn’t at all surprised by gum’s appeal. Raised in England, she grew up with gum as a forbidden treat, hearing her grandfather curse the American soldiers who he said brought gum with them during World War II.

“He said he couldn’t walk out the door without getting gum on his shoes,” she said.

Growing up, she was allowed to chew for 20 minutes after dinner, and that was all. Not surprisingly, she counts herself now as an enthusiastic chewer of gum.

But for both artists, what appeals most about the Traveling Gum Wall isn’t the substance involved as the community feeling it generates.

The two artists began collaborating on art projects five or six years ago as members of the Yellow Springs Arts Council, where they discovered a common love of playfulness and surprise.

They first joined forces to create the Chamber Pot Art Gallery in the restrooms of the Yellow Springs train station, and next covered a tree next to the Emporium with knitting, finding themselves the focus of worldwide publicity with their Knit Knot Tree. Other events followed, including covering signposts and utility poles on Dayton Street with knitting, efforts that found their way into six books on yarn-bombing.

Next came Flower Power, a community project in which the women led a group of like-minded artistic types in creating felt flowers to decorate Dayton Street. And most recently, with Peeps in the Park, the artists solicited 13 panels of original art from local artists that are now displayed outside the Village Artisans.

“I think this little town is so underestimated sometimes,” Bayraktaroglu said. “It’s full of amazing artists and creative people.”

Added Mellon, “You don’t have to go someplace else to have something to do.”

It’s a safe bet that the JafaGirls (Jafa stands for “Just Another F___ing Artist”) will always find something to do. And this weekend you’ll find them creating the world’s first Traveling Gum Wall, and looking for others to join in the fun.