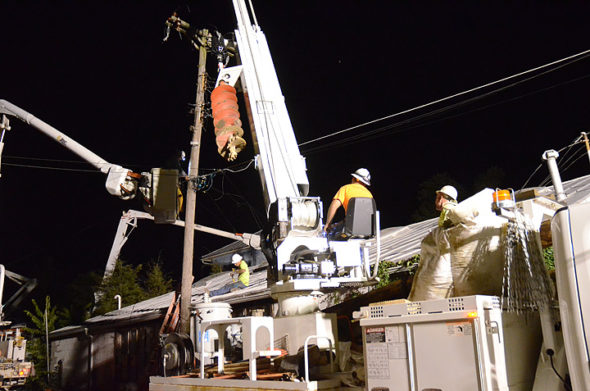 While you were sleeping…

Late Wednesday night, when most of the town was either asleep or heading there, a crew of about 15 workers were waiting for one man — held aloft over Kieth’s Alley in the wobbly confines of a bucket truck — to finish the delicate work of disconnecting several 7,500 volt power lines.

Once the lines were safely grounded, the entire alley and adjacent Glen Street sprang to crisply organized life as workers from the village electric and water distribution crew and Hi-Tech Electrical Contractors, LLC out of Washington C.H., set about the task of retiring and replacing a centrally located utility pole.

The entire process involved isolating the old pole by disconnecting power and utility cables from at least three adjacent poles, stripping it of insulators and wire fragments, carefully unseating it, then even more carefully seating the new pole, and finally stringing everything back up again.

Such a task would seem daunting even in the best of situations, but the tolerances in Kieth’s Alley are already tight — it’s an alley! — and the utility pole location is mere inches away from the back wall of the Yellow Springs News. The other constraint was time, as power to the the News, the Sunrise Cafe and, most crucially, the Speedway gas station, would have to be restored no later than 6 a.m.

The old pole was timber-topped, gently lifted out of its hole of 50 years, and laid on the ground, where it was disassembled and stowed for disposal.

The new pole, a good 5 to 10 feet taller than the previous one, was guided gently into place by a crane operator who pulled out a plumb bob, the most ancient of builders aids, to ensure the verticalness of the install.

Village crew head Johnnie Burns figured the old pole had been in place at least since the 70s, more likely the 60s, and had recently been found unsound. Tough it was no longer fit for service, it wasn’t the oldest pole in the village. That honor goes to one pole dating to 1923, which, according to Burns, was also recently tested and found to be in fine form.

NOTE: The following morning at 8:30, I unlocked the News and was greeted by the reassuringly gentle rotation of our ceiling fans, indicating all was electrically well. I turned on lights, tentatively at first, more confidently later, then computers, finally the big-power laser printers. It was not without pause and reflection that I threw those switches, on the all-but-invisible overnight work of those 15 workers, three bucket trucks, water excavator and small crane. Village electric and water crew foreman Ben Sparks generously removed and gave me one of the old two-tone, heavy ceramic insulators, which will sit on my desk as my reminder, whenever the lights flicker irritatingly, of all that goes into my being able to write this, with warm coffee or cold drink at my side.

3 Responses to “While you were sleeping…”