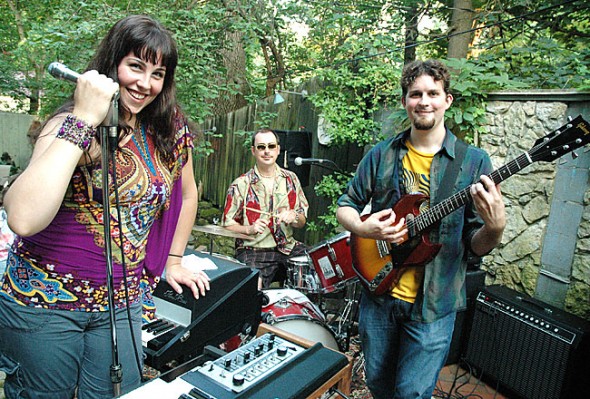 From left, Jessica Kinzer, Matt Housh and Ryan Henry are The Show, a local indie punk band releasing their debut CD at a concert Saturday, July 30. The show starts at 7 p.m. at the Yellow Springs Arts Council’s Oten Gallery, which is also featuring a collection of Henry’s concert poster art for The Show. They are shown performing at last weekend’s Yellow Springs Experience. (Photo by Megan Bachman)

“The Show will grow,” the slogan of the Yellow Springs-based three-piece indie band The Show, is prophetic. The band, which dabbles in psychedelic and garage rock while never straying far from its British punk roots, is rapidly becoming a local favorite. With the release of its debut CD, the opening of a poster art show at the Yellow Springs Arts Council’s Oten Gallery and plans for a double-booking on Saturday, July 30, oh, how the Show has grown.

Not too bad for keyboardist and vocalist Jessica Kinzer, guitarist Ryan Henry and drummer and singer Matt Housh, who played their first show together two years ago.

“We’re a breath of fresh air for the local community and the music scene,” Housh said.

Self-described as a “funky spy punk” band with pop songs, The Show releases its self-titled, self-produced album on July 30, with concerts at the Oten Gallery at 7 p.m. and Peach’s Grill at 11:30 p.m. In conjunction with its show, a display of Henry’s concert poster art continues at the Oten Gallery until Aug. 13. The event at the Oten Gallery costs $5, but free tickets are available at the Arts Council and the Chamber of Commerce through July 29.

Even though two of its members live in Springfield, The Show considers itself a Yellow Springs band. The band was born at a Peach’s open mic night, features Mills Lawn School Principal Housh, plays most of its gigs here and generally feels the love from the town.

“Yellow Springs is the supportive womb of music,” Housh said. And even though the local scene is more folk and rock than pop and punk, The Show finds itself inspired by the town’s attitude and penchant for fun, he said. The Show was all smiles last weekend as 150 people came to take in their original tunes at a concert as part of the Yellow Springs Experience.

“We’re not afraid to get weird in the name of self-expression,” Henry said. The Show stays away from covers.

The band’s fast drums and vocal pitches are ripped from late 1970s punk, its organ sustains and groovy guitar riffs harken back to the 1960s and yet The Show’s music feels contemporary. They’ve been compared to The Cars and Blondie, but the Violent Femmes and the Jam mixed more readily come to mind while listening to The Show.

The July 30 Oten Gallery event will be a multi-media blitz. A visual media group called the Now Device, featuring Springfield’s Rod Hatfield, will project visuals in conjunction with the concert performance. Its visuals “add atmosphere and intensify experience” at live performances, turning galleries into “immersive environments,” according to the Seattle-based company’s Web site. And Henry’s poster exhibit, “Synesthesia: Rock N’ Roll Renaissance,” a collection of posters he created for The Show’s concerts, will continue to be displayed in the gallery. Poster prints are on sale from $40 to $195 and Show CDs are on sale at the gallery for $10.

The posters, created with markers and collage, are vibrant, colorful and definitively psychedelic. Henry said he draws inspiration from poster art of the Haight-Ashbury area of late 1960s San Francisco and old French advertising posters.

“If you like it, steal it,” Henry said of The Show’s posters hanging on bulletin boards around town. “But wait until after the show,” he added.

The trio met at an open mic night at Peach’s where Kinzer and Henry performed as the indie folk group Punch & Judy, having played together for five years previously. Housh came to open mic to sing and play the guitar and after helping Kinzer and Henry carry in their gear, discovered they had a similar taste in music. Their first gig together was the 2009 Skatefest in Yellow Springs and the band has since played at the Emporium, Street Fair, Dayton’s Southpark Tavern and Springfield’s Westcott House. But next Saturday’s event is their biggest yet.

“This show is the culmination of two years of hard work to have both the art show and the music,” said Henry, a self-taught musician and art school dropout. He began his musical career in middle school as a member of Mourning Glory, an Enon-based band that played frequently in Yellow Springs. He points to the Allman Brothers, Frank Zappa and the Grateful Dead as musical influences.

Housh grew up a “young rapscallion who loved punk rock,” and took in the flush late 80s and early 90s Dayton punk scene along with David Bowie, Black Flag, the Misfits and Jimi Hendrix. Punk, with its simple, catchy songs and political messages, was his favorite.

“The emotion and the energy [of punk] is just very pointed,” Housh said. On his very punk track, “Passive,” Housh lambasts a conservative view of schooling.

Kinzer began with classical piano lessons at age five before returning to the keys as a college student at the urging of Henry, whom Kinzer met at Wright State University. Kinzer, originally from Bellbrook, went on to develop a style reminiscent of the golden age of the rock organ — the 1960s — all on vintage equipment predating 1976. Like Ray Manzarek of the Doors, Kinzer lays down the bass line while adding keyboard tones.

“Robot Jessica Rampage,” the album’s single, is a silly tune that was created during band practice, when Kinzer was trying to keep her band mates in line. All three are credited as songwriters on the album, which was recorded at their home studio in Springfield and mastered by local music man Crazy Joe Tritschler.

“See The Show,” is yet another band slogan, and their appeal to the Yellow Springs community on July 30. At the event they hope to develop the ambiance of an art happening rather than a concert and encourage hula hoops and kids. To Housh, that youth come and dance is especially important.

Visit ysnews.com for video of The Show at the July 16 Oten Gallery concert.