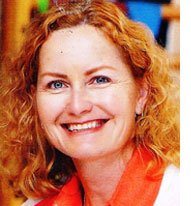 Scarlett Rains will sign her new book this Sat., Aug. 20, at the Book Fair at Mills Lawn. (Submitted photo)

Any period that’s rife with change is a good setting for a story, and the revolution-riddled 18th century is as fertile a ground as they come, according to local author Scarlett Rains. Her new “Sisters of the Heart” series about the coming of age of an orphaned heiress and her governess takes place in London around the time of the anti-Catholic Gordon riots. If there is alignment between the author and her headstrong heroine, it is because the story is as much a result of the tumultuous period as it is a symbolic expression of an unusual personal history.

In the beginning of Rains’ historical romance, the protagonist Amelia finds herself bereft of parents at the age of 7 and taken in as the charge of her governess and a man she calls “Uncle.” The first book in the series, Promises of the Heart, is told largely from the perspective of Amelia, whose carefree life on the estate will be intricately tied to plots of deceit, heroism, tragedy and murder. The second book, Seduction of a Bluestocking, occurs in the same period but focuses on the love story of Rachel, the governess, followed by the expected release of the third book in the series, Betrayals of the Heart, the story of Amelia’s young adulthood. With the release of the first two books in July, and the third coming out this fall, Rains will appear at her first book signing at this week’s Book Fair at Mills Lawn on Saturday, Aug. 20, 8 a.m. to 5 p.m.

The story’s theme of strong women bonded not by blood but by the heart honors the role models Rains had growing up in Xenia and attending school at the Ohio Soldier’s and Sailor’s Orphan’s Home, later known as the Ohio Veteran’s Children’s Home. She dedicates the first book to the home and to Ronald Weber, the English teacher in whose class she used to sneak the kind of novels she now writes. Though it comes easily enough now, she said, she didn’t start out as a writer.

Rains spent the first part of her working life as a clinician and later as a clinical coordinator of an area hospital. She had always journaled and written short stories and poems for herself, but never thought of herself as a writer — until a couple of years ago when she stepped back to reexamine her life. Highly stressed and buffeted on all sides by a flawed and complicated healthcare system, she realized she needed to make a change.

“It made me question what I was doing and start thinking about what really gives me joy,” she said during an interview last week.

She wanted to do something meaningful, something expressive and creative. She told her husband she was quitting her job and gave herself one year to write. And she found that she had a lot to say.

Rains has read extensively, especially in the Georgian, Gothic and Regency romance genres since she was 14 and knows every formula in the library. Starting out with classics by Charles Dickens, Jane Austen and Margaret Mitchell, and settling on contemporaries Julie Anne Long and Stephanie Lawrence, Rains was fascinated by the history of the period, which includes the bloody American and French Revolutions as well as the modernization that started the Industrial Revolution and the early suffragette movement.

“My being a writer comes from being a reader,” she said.

But eventually, right about the time she quit her job, she was getting tired of the romance formula of girl meets guy, they fall instantly in love, fate forces them apart, and finally brings them back together. And she hated stories that didn’t fit the period, including scenes that were socially inappropriate in a more publicly conservative era.

“Like, would you really meet this person in Central Park in this way? Okay, I’m gagging!” Rains said. “And it’s too bad, because some of these authors are really good writers!”

Rains wanted to tell a slightly different story, using the elements of the genre to push the envelope by providing background and motivation for all of her characters, for instance, not just the rich and famous. In “Sisters of the Heart,” Rachel the governess is one of the main characters, substantially supported by Mrs. Edwards the housekeeper, Adelaide the cook, two step-sons John and Alex and friend Leonora.

The stories are told in the language of the period, including scenes in which a young girl gains social awareness from her interactions with mud larks who scavenge for coal, bedlamite madmen and clapper dodgers, who feigned madness for alms. The raw violence of public beheadings and civil unrest in London in the late 1770s features in the first novel, and carries over into the second book. Rains’ third book broaches real issues of sexuality that are typically considered taboo but were actually very prevalent at the time, she said.

“It’s historically accurate, and it’s the only way for these stories to be told,” Rains said. “The third book, for instance, is not overly traditional in the sense that one of Amelia’s childhood friends will marry someone who is conflicted sexually and gets involved with a transvestite.”

Applying a modern sensibility to the goings on of the period, Rains found that in the writing process, stories simply came to her, like a projection inside her head.

“Sometimes it really does feel as if the stories are telling themselves to me, and I’m just watching the characters and trying to capture them in words.”

She wrote until she had three books worth of material, and then waded into the daunting task of trying to find a publisher. But that too she would do her way. She found a company in Canada who wanted to buy her work, but they had formulas dictating what percentage of the story had to be told from the hero’s point of view, and other demands that would reshape the story for readers tracked by corporate studies. So again, stepping back to look at the purpose of her project, she signed with the local Artemis Books, which allowed her to tell the story she needed to tell.

In her mind, romance is about finding a sense of belonging, which everyone needs, Rains said. Her stories are essentially about the bonds people forge that are sometimes stronger than family, which mirrors the relationships Rains herself has found throughout her lifetime. Some of the events of her own life that were hardest to bear turned out to be the blessing that has guided her to give voice to her deeper self. And because of that, Rains feels that her writing “was meant to be,” she said.

Promises of the Heart and Seduction of a Bluestocking are available in print, Kindle and e-book form at Barnes and Noble, Amazon.com and Smashbooks and have been sold in the U.S., the United Kingdom and three additional countries. Betrayals of the Heart will be released through the same channels this fall, followed by more books to come in the “Sisters of the Heart” series. Readers can follow Rains on Twitter (ScarlettRains), Facebook and her blog, and also post reviews of her work on Goodreads/Google.